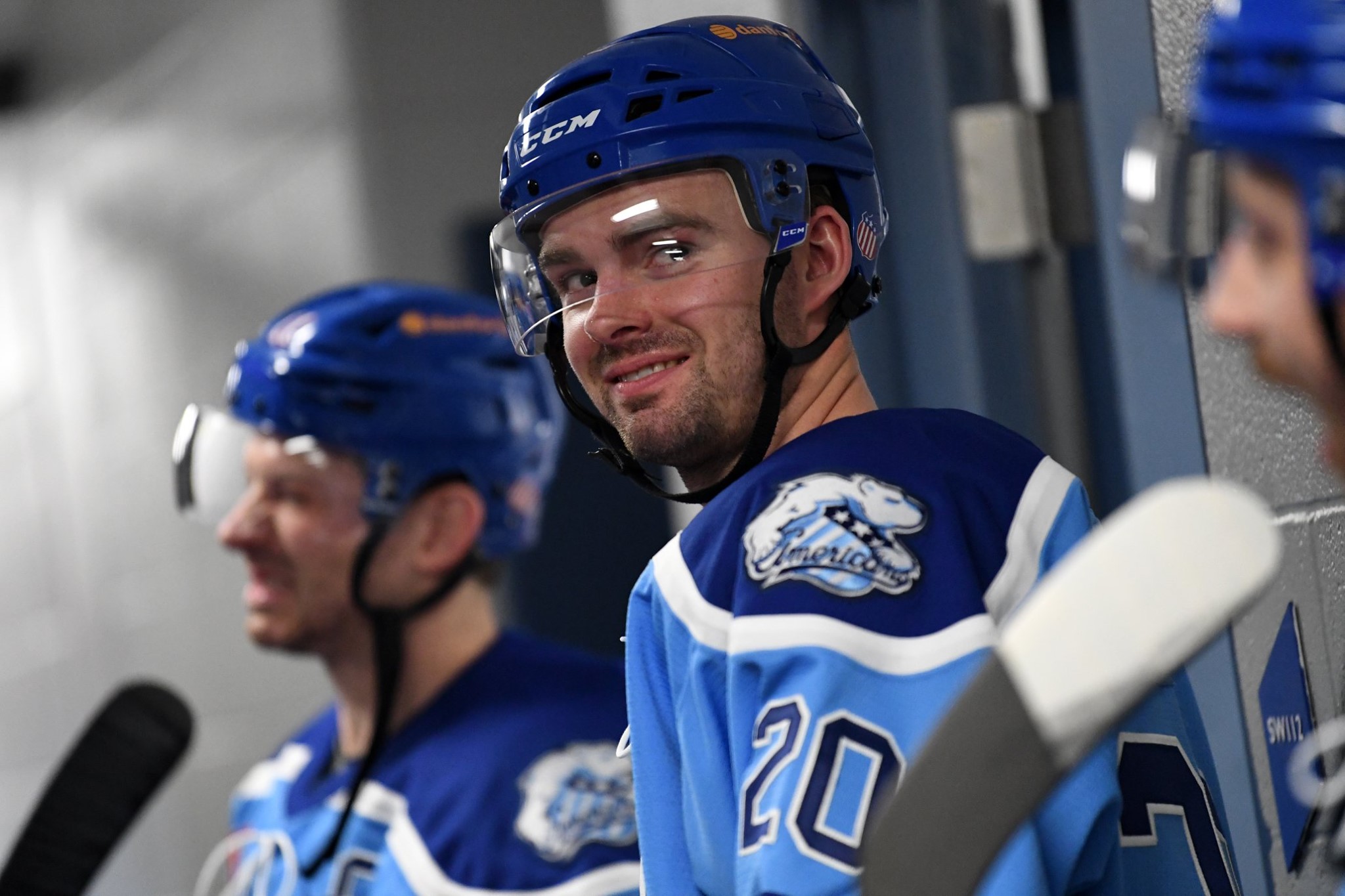 It wasn’t the prettiest of wins but it was a team effort and an entertaining hockey game from start to finish. Eric Cornel and a perfect penalty kill carried the Rochester Americans to a 4-2 win over the Laval Rocket. The Amerks finished the season series perfect against Laval with a 4-0 record against them along with outscoring them 17-6.

Anyone that has been paying attention to the Rochester Americans over the month of February knows that it’s been a roller coaster of a month. The team went into Friday night with a 5-4-2-1 record this month with five of the last six games being decided in overtime or a shootout.

“We might have been up two goals after the first but we didn’t exactly play that well,” Eric Cornel said after the game. “Hammond kept us in there, played a great game, and then we just stuck with it and that’s really important this time of year.”

Remi Elie scored just 2:10 into the game and then Casey Mittelstadt scored with 43 seconds left in the first period to give Rochester a 2-0 lead. The two goals would never win awards but when scoring goals can be tough to come by you take what you can get. The Elie goal was off a faceoff win by Mittelstadt that bounced off some legs and then trickled past Laval goalie Cayden Primeau.

When Casey Mittelstadt was asked about his goal to put Rochester up 2-0 he said, “Leier just kind of threw it in and JS made a really good play hitting it out of the air and the rebound came right to me, I pretty much had the whole net. A good bounce for me.”

The game took a turn early in the second period. Kevin Porter had delivered a hit to Jake Lucchini and on the delayed penalty Laval scored their first goal of the game. Laval had thought they scored but there was no call by the refs at the time so they went to the box for a review. Kevin Porter was ejected from the game for what they said was a hit to the head and shortly after he left the ice it was determined to be a good goal credited to Nikita Jevpalovs.

Talking about the hit Chris Taylor said, “I just watched it three or four times again and I don’t even think it’s a two minute minor to be quite honest with you.” When asked if he was given an explanation Taylor said, “I didn’t get one.”

“They (the refs) didn’t know it went in so they were reviewing that. I guess they didn’t see the two high sticks before the goal,” Chris Taylor said. “It was a tough play on all fronts when you look at it the play was definitely a high stick. Two guys actually touched it over the net with their sticks and then they put it in and then the five minute major. So we had a five minute major and goal against.”

The Rochester penalty kill has been excellent in recent games only allowing one goal against in the last nine games while killing off 22 of 23. The team killed off the five minute major along with three other minor penalties Friday night.

“It’s huge, especially killing off that five there,” Casey Mittelstadt said when asked about the penalty kill. “They got the goal on the review too going into that so that’s a huge kill. That’s definitely a turning point in the game. I know they came back and got the next one but if we gave one up there we’re in a bit of trouble. The penalty kill has been great and it was good again tonight.”

“Special teams is important at all times of the year especially down the stretch,” Eric Cornel said. “We have a lot of guys who can penalty kill so we’re pretty much getting everybody out there, keeping shifts short. It’s good when everybody chips in like that.”

Chris Taylor talked about the play of Andrew Hammond on the penalty kill and also said, “We used a lot of people on the PK just because it’s five minutes. We tried to use the whole bench just to make sure we had enough energy going into the third.”

He wasn’t kidding when he said they tried to use the whole bench. The team used 14 of 16 available skaters with only John Gilmour and Brett Murray not seeing ice time. Kevin Porter was ejected and CJ Smith had served the penalty.

With a 2-1 lead the Amerks had a golden opportunity when Rasmus Asplund was awarded a penalty shot at 16:33 of the second period. Asplund skated in on goalie Cayden Primeau, made a move, had an open net, and shot wide. Just 36 seconds later Laval took advantage and Laurent Dauphin scored to tie the game 2-2.

Eric Cornel would be the hero of the third period by scoring the game winning goal and then the insurance goal to ensure a 4-2 win for Rochester. The game winning goal was a perfect redirect in front of the net off a shot by Will Borgen at the point. Sean Malone had the secondary assist. The insurance goal was an empty net goal with 7 seconds left on the clock with assists to Leier and Asplund.

This was the first regulation win for Rochester by more than one goal since February 5.

“It was important,” Eric Cornel said when asked how important it was to get the win on home ice. “I think we’ve been playing pretty well, maybe not always getting the results in regulation. They came hard tonight and they’re a desperate team. I think we’re going to see a lot of that type of hockey down the stretch here against teams in our division.”

Cornel is playing in his fourth full season and is having a career year. His two goals tonight increased his total to 12 for the season. The last two seasons he only scored nine. One more point and he’ll tie a career high in points with 22 that he set last season.

Rochester travels to Syracuse for the final game of the week and it’s a road game that everyone looks forward to.

“Nothing better than Saturday night in Syracuse I’ll tell you that,” Chris Taylor said. “I love it. It’s great, can’t wait for it, and it’s a big game for both teams and we’ll be ready.”

I asked Casey Mittelstadt about the game ahead and with a smile remembering the play he said, “Seems like we play those guys every weekend so the amount of times we play them I think we don’t like each other, and I’m sure they don’t like us, and their fans can be annoying for sure. It can be fun.”