Buffalo Sabres management is failing the Rochester Americans. The season, which arrived amidst much hoopla with the NHL lockout, is starting to come off the rails by the middle of December, with apparently no help in sight. To the contrary, the positive is just that, itâ€™s only the middle of December and there are 55 games remaining. However, one has to wonder if Sabres GM Darcy Regier and Kevin Devine, who oversees Amerks hockey operations, really have any pulse on what is happening to the Amerks â€“ and if they do, do they care?

It didnâ€™t start well on the injury front, with the Amerks losing Corey Tropp for the season during their very first game. Many fans hoped for a replacement player right away. That the Sabres management would recognize losing their top winger in the first game could be a devastating blow, especially in a league with so much talent. But nothing happened. It was understandable, especially when Brian Flynn capitalized on his new opportunity. He has, perhaps, become the Amerksâ€™ best forward and arguably MVP to date.

However, it didnâ€™t end there. As it seems to happen to every year to the Amerks, regardless of affiliation, the injuries began to mount. First, it was Cody Hodgson, the team’s most skilled and best player. He broke his hand on October 27th in Glens Falls. He played the following Friday at home, however it was determined he needed to immobilize the hand and he was going to be out a few weeks. Predictably, a few weeks turned into more than a month. Then it was rookie Zemgus Girgensons getting hurt, then Nick Tarnasky, Rick Schofield and finally Evan Rankin.

And that brings us to today, a day after a 4-3 loss in Toronto. An indefensible game where Sabres management let down their own team and the fans who watch them. The Amerks have lost 6 out of their last 8 games. They played this game in Toronto down a skater. A professional hockey team in the top league in North America couldnâ€™t even dress the correct amount of skaters. Out of those 17 skaters, one was a defenseman playing at forward. That leaves the Amerks, playing one of the best teams in the league, using 10 forwards. Which goes back to the original point: The Buffalo Sabres management is failing the Rochester Americans.

This doesnâ€™t even go into all of the other issues the Sabres have neglected. The Amerksâ€™ defense has struggled all season long with the lack of a veteran, stay at home defenseman. Itâ€™s obvious to even the novice fan. But the Sabres have no plan to help out or add anyone. According to the Democrat and Chronicleâ€™s Kevin Oklobzija, Kevin Devine said the Sabres had no plans for any roster changes if the NHL ends its lockout. So Amerks fans, you will lose at least Marcus Foligno and Cody Hodgson, and see absolutely no help from the parent club. So, if the lockout persists, it sounds like there will be no help to the roster, as no one will be going up to the NHL.

I am struggling to figure out how a management team can be so blind to whatâ€™s right in front of them. The Amerks are 10-9-2 sitting in 11th place in the western conference, out of a playoff spot. How can any professional team, in any league in any sport, rule out changes or additions to a mediocre team that sits outside of the playoff picture? Yes, as noted prior, itâ€™s early in the season. But if the problems we have seen persist, it wonâ€™t make a difference. Cody Hodgson will not get the defense to tighten up or make the goalies better.

This is a parent club, the Buffalo Sabres, who said on day one when they bought the Amerks that their goal was to win a championship. Terry Pegula, Sabres owner, wrote a letter to Amerks fans stating the goal in Rochester is to win a Calder Cup. Well Mr. Pegula, what happened? Last yearâ€™s edition of the Amerks was mediocre, and snuck into the playoffs on the last day of the season. They then were swept by a much better and more talented team. This yearâ€™s edition looks to be no different. YET, we have management coming out saying they have no interest in trying to help the team out? That kind of statement should be grounds for firing and it should be offensive to every Amerks fan out there. And frankly for every fan of competitive sports in general.

Letâ€™s contrast this by looking at the San Antonio Rampage. Two weeks ago, they had the worst record in the league. Today, theyâ€™ve won 5 out of their last 6 games. You know what else they did? The management team there, who at one time ran the Amerks, decided the team needed some help – even in the middle of a winning streak. They signed Jon Sim, one of the AHLâ€™s best goal scorers in recent year. (55 goals in his last 89 AHL games, and a veteran of nearly 500 NHL games). They also signed defenseman Mike Mottau, who has been an NHL regular for the past 5 years. Many Amerks fans, including myself, have bad memories of the Florida Panthers for good reason. However to their credit, they are attempting to make moves to help out their AHL team. The effort is there. 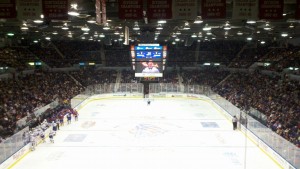 Iâ€™ll end with some simple math that is puzzling and that I just canâ€™t quite figure out. The Amerks have six injuries to forwards currently. The amount of forwards the Sabres have brought in to help Rochester? Zero. Not a single player brought in. Not from the ECHL, not from free agency and not even their own â€œprospectsâ€ playing at lower levels like Shawn Szydlowski and Jacob Lagace. Some forwards are expected to return the next game. But thatâ€™s irrelevant. Itâ€™s downright shameful that Darcy Regier and Kevin Devine would allow this to happen for even one game. So we come back to one very simple point thatâ€™s becoming quite obvious: Buffalo Sabres management is failing the Rochester Americans.