If Franklin MacDonald gets another crack at a shootout the next move he may pull off is spinning around, skating backwards with his back to the goalie, and then at the last minute spinning around again to get a shot off.Â  It’s become normal for the team to practice shootouts at the end and while most take it seriously, some of the other players like MacDonald have some fun.

Tyler Plante is finished for the season with his shoulder injury.Â  This is the second season in a row he’s finished off the year like this.Â  Not sure what’s going on, but I hope he’s able to get it fixed/recover.Â  He had shown a lot of improvement since returning from the ECHL and showed that he was capable of playing at this level.

Tanner Glass is still practicing in full gear, participating in all the drills, but he’s not quite ready to play.Â  Benoit said that he’s not playing this weekend.Â  We were recently told about 2 1/2 weeks which would have him returning in Toronto for the final three games of the season.

The only other update to come out of practice is that Mike Brodeur did not practice, Benoit said that he will be on the ice on Thursday morning.Â  Brodeur apparently suffered a lower abdominal strain during the game on Friday against Lake Erie.Â  Not sure if this is when it happened, but as he was leaving the ice for the extra attacker early in the third period on friday he took this spill: 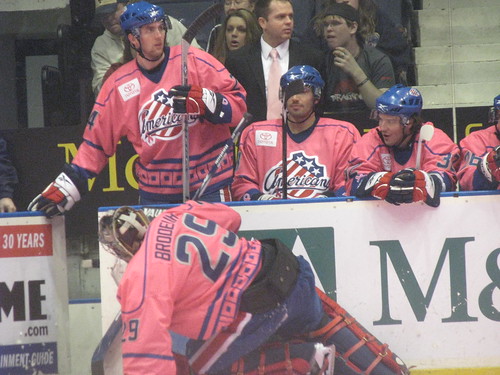 1 thought on “Updates on Brodeur, Plante, and Glass”