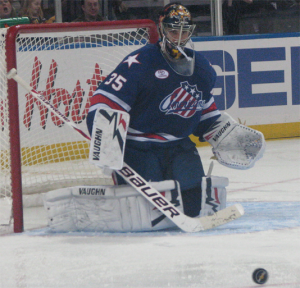 Tyler Plante has been playing at his best in net for the Amerks over the past month and it’s paying off for him not only in wins but also awards from the AHL.Â  He was named goalie of the month for March and is now named player of the week for last week when he was undefeated.

Heading into the playoffs Plante is familiar with this time of year.Â  In his final season playing for the Brandon Wheat Kings in the WHL he led them to the finals.

SPRINGFIELD, Mass… The American Hockey League announced today that Rochester Americans goaltender Tyler Plante has been named the Reebok/AHL Player of the Week for the period ending Apr. 4, 2010. Plante was 3-0-0 with a 1.30 goals-against average and a .961 save percentage, including wins over the top two teams in the entire league.

Plante began the week with a 37-save performance at Grand Rapids on Wednesday, leading the Americans to a 3-0 victory and clinching a berth in the 2010 Calder Cup Playoffs. Plante then stopped 32 of 33 shots on Friday in a 3-1 win over the league-leading Hershey Bears, and made 30 saves on Saturday as Rochester defeated the Western Conference pacesetters, the Hamilton Bulldogs, 4-3 in a shootout. Plante, who was also named the Reebok/AHL Goaltender of the Month for March on Thursday, finished with 99 saves on 103 shots for the week.

In recognition of his achievement, Plante will be presented with an etched crystal award prior to an upcoming Americans home game.

A second-round draft pick (32nd overall) by the Florida Panthers in 2005, Plante is 4-0-1 in his last five decisions and has a record of 12-11-1 in 26 contests and leads Rochester with a 2.57 GAA, a .916 save percentage and three shutouts. Plante, a 22-year-old native of Milwaukee, Wis., is in his third professional season and has established career highs for wins and shutouts.