The Rochester Americans are about to face off against the Lake Erie Monsters, you can listen to the game live on WHTK 1280AM 107.3FM or whtk.com. Â Both teams have lost their first two games and are looking for their first win of the season. Â In two losses the Amerks have have tallied an amazing 10 goals against and only scoring three. Â The Monsters have had three goals scored against and only one for.

If you’re watching on AHLLive or listening here’s the roster sheet for tonight.

We do know that scratches for the Amerks due to injuries will be Paul Szczechura, Drew Schiestel, Jacob Lagace,Â Maxime Legault and possibly Dennis Persson. Â The starting goalie will be up in the air, both Drew MacIntyre and David Leggio will want to make up for their losses.

The key to winning this game is going to be to score some goals. Â It’s that simple. Â To win you have to score. Â The defense will also need to play much better to prevent quality chances from the Monsters.

The Buffalo Sabres have their home opener tonight so it’s doubtful too many eyes will really be on this game which could be good for the Amerks based on the last two performances. Â The Amerks need a strong victory on their backs to ride some momentum into two upcoming home games. 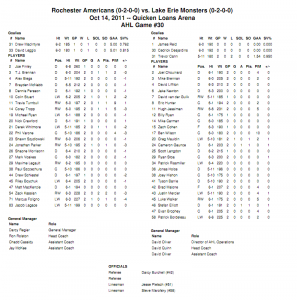