The 2012 American Hockey League is holding it’s All-Star festivities this Sunday and Monday in Atlantic City and I’ll be travelling down there to cover the event. Â I’ll have news on everything from the skills competition, the All-Star game itself, the state of the league address and also the Hall of Fame induction ceremony. Â I’ll also talk to Zack Kassian who is representing the Rochester Americans.

Keep lga585.com bookmarked, follow me on Twitter @LetsGoAmerks, on Facebook.com/LetsGoAmerks and also through my Android and iPhone applications.

One of the highlights will be Joe Crozier being inducted into the AHL Hall of Fame on Monday morning. Â The Rochester Americans have won six Calder Cups in the history of the team and out of those six Joe Crozier has won three. Â Crozier coached the Amerks to Championships in the 1964/1965, 1965/1966 and 1967/1968 seasons. Â He also returned to coach the Amerks during the 1983/1984 season and coached that team to the finals. Â Ask a long time Amerks fan and Joe Crozier is one of the first names they’ll mention.

More on Joe Crozier from The AHL:

One of the most identifiable figures in the annals of the Rochester Americans, Joe Crozier helped lay the foundation for what would become a flagship franchise through a dominating run of achievements.

A native of Winnipeg, Crozier played 12 professional seasons as a defenseman, making AHL stops with the Springfield Indians and Providence Reds before he first joined the Rochester Americans in 1959-60. Crozier helped Rochester reach the Calder Cup Finals that season, and then closed out his playing career with the Amerks the following year. 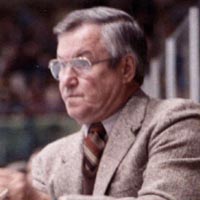 In 1963, Crozier returned to Rochester to become the young franchiseâ€™s ninth head coach in eight seasons, and in 1964-65, after he added the duties of general manager, Crozierâ€™s club was the class of the American Hockey League. They went 48-21-3, setting a team record for wins that would stand for 34 years, then dispatched Quebec and Hershey to capture the franchiseâ€™s first Calder Cup.

Crozier kept his Amerks on top of the league in 1965-66, winning a second consecutive Calder Cup after another dominating regular season. And following a loss to Pittsburgh in the 1967 Finals, he became the third head coach in AHL history to win three Calder Cups when Rochester reclaimed the title in 1968.

Crozier left Rochester in 1968 and found success in other coaching stops, including the Cincinnati Swords and New Brunswick Hawks in the AHL. He returned to the Amerks for one last season in 1983-84, and guided the club to yet another Calder Cup Finals appearance before retiring from coaching.

During his six full seasons as an AHL head coach, Crozier reached five Finals and won three league championships. Two other seasons in the AHL were cut short when he was promoted to coaching positions in the National Hockey League.

With a career record of 305-199-46, Crozierâ€™s .596 lifetime winning percentage ranks second among the 16 members of the AHLâ€™s 300-win fraternity, and his Rochester Americans of the late 60â€™s remain the only team in league history to reach four consecutive Calder Cup Finals.

If anyone has any questions they’d like asked let me know!