I think it’s safe to say that just about every hockey player, fan and anyone in the media has HockeyDB set as one of their bookmarks or can type the name of the site faster than just about any other site. Â A few professional hockey players are trying to take a piece of that pie by developing an app for our smartphones with an expected release date before the season starts.

(Side note: If you don’t have it installed Â already, download the lga585.com app on to your iPhone, Android or Blackberry phone immediately by visiting the apps page here!)

The project involves former Rochester Americans defensemen Kyle Hagel (a whopping 3 games), Dustin Sprout and Cam MacIntyre. Â Kyle Hagel reached out to me over the weekend to help spread the word and ask for feedback from others.

Here’s the description given about the application:

Shnarped is an iPhone application – created by three players that have recently played in the AHL – that will aggregate information (stats, news/blogs, videos, twitter) about all professional hockey players onto a player page. Players will have access to these profiles and will be able to customize them with unique content. It is about a month from release so here’s your chance to get in on the ground floor. We want know what hockey fans want most so that we can tweak it and make it better. Thanks for your help!

One of the interesting features about the app will be the interactive portion of it. Â It’s described as:

The “pound” button (like a fist-bump) is a way for users to send a player a virtual tap on the shin pads for a job well done on the ice, a cool tweet, community involvement, etc. The player will be able to “pound back all” fans who sent him a pound, via push-notification, therefore making interaction with fans quick, easy, personal and non-intrusive.

Sounds like the poke button on Facebook. Â Hockey players have a lot of free time between games and are online more than you may think and more than they may let on so this would be an additional way other than Twitter that they can interact with fans.

Take a couple of minutes and fill out the survey link! Â Here’s a couple of additional screenshots (also see the one above): 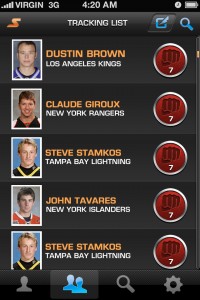 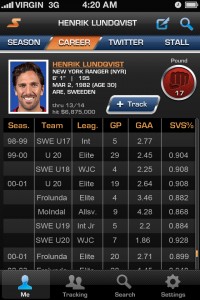 The players have been working on the app during the off season with a development team and hoping to launch it for the preseason. Do these guys a favor and fill out the survey and stay tuned. I know I’m not the only one with my phone in my hand during the season and constantly looking up stats and info.

In case anyone is wondering,Â I have no business interest in this in any way. Â I am just helping to spread the word!