This past week some devastating fires in Fort McMurray, Alberta forced an evacuation of the city and leveled entire neighborhoods. Thankfully there weren’t any casualties but sadly a lot of homes and personal belongings were lost in what is expectedÂ be the largest insurance event in Canadian history atÂ over $9 billion.

One family that has been impacted is a name that Amerks fans will remember from the 2008/2009 season. Mike Brodeur was signed to a PTO in December 2008 when goaltending was a train wreck and I remember writing at the time, “he could be our only hope.” His stellar play delivered on thatÂ hopeÂ and helped turn the season around. Mike also played in The AHL All-Star Game that season. After that Amerks season he went on to play for the Binghamton Senators before injuries ultimately ended his career early.

Click through and help them out if you can through this GoFundMe page -Â https://www.gofundme.com/22qv93g

Along with his wife Melissa they also have two sons, Beckam (4yrs old) and Ryan (4 months old). They left their home with only some clothes in a suitcase as the city was quickly evacuated. Their home and everything else was wiped out by the fires. Insurance will be of assistance but in the meantime Melissa is out on maternity leave and Mike’s work was lost to the fire as well so any help for the family is greatly appreciated.

Also if anyone has anything related to Mike from his playing time with the Amerks or Senators that you’dÂ be willing to part with as well that would be appreciated. All of their hockey memories were lost as well in the fire. There isn’t an address where anything can be sent right now but if you have anything reach out to me at [email protected] and when the time comes we can make sure to get it to him.

Click through and help them out if you can through this GoFundMe page -Â https://www.gofundme.com/22qv93g

Here’s other ways that you can help the thousands that have beenÂ impacted by the fires -Â http://www.macleans.ca/news/canada/want-to-help-those-fleeing-fort-mcmurray-heres-how/ 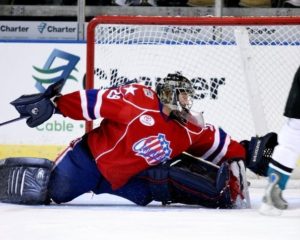