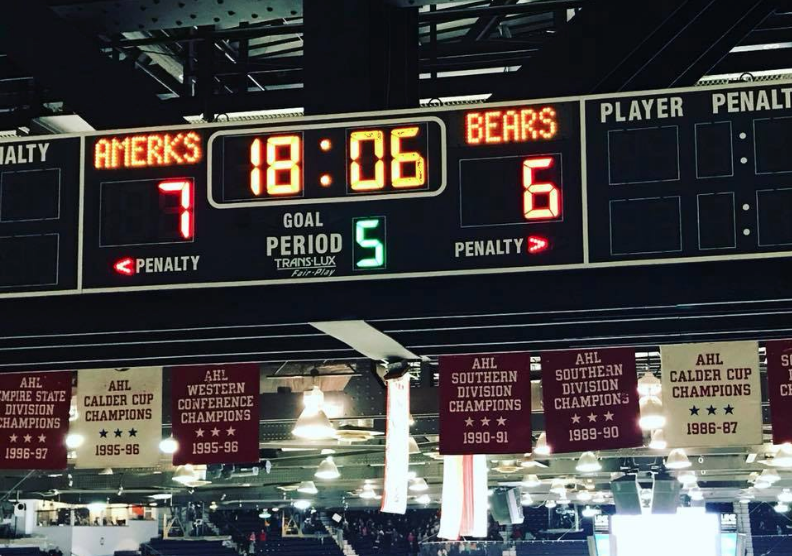 Chris Taylor walked into the post game press conference and jokingly said, “that all went according to the game plan.” The team is resilient and it paid off. Eric Cornel for the second game in a row scored in the shootout to give the Amerks their fourth win out of the last five games.

“Thatâ€™s not how we drew it up,” Kevin Porter started off like a captain should. “We canâ€™t be giving teams three goal leads in the first period at home, thatâ€™s unacceptable. Came back and battled back in the second and gave it away in the third.”

Asked about being consistent at being resilient Eric Cornel said, “It’s huge when you can believe in each other.”

Hershey had scored 44 seconds into the game and then tallied two more goals within the first seven minutes of the first period before Chris Taylor called a timeout to settle things down.

No one was happy with the first three goals against. The team knows they haven’t played well at home and it was talked about leading up to the game but here they were yet again. A bigger than usual Friday night crowd was noticeable by the players in the warmup and they were excited to play.

Kyle Criscuolo was asked what was said during the time out, “We have a lot of fans in the stands for one the first times on a Friday night and you can hear them. When the scoreboard says make some noise you can actually hear them. We want to win for them. Just start building one shift after another.”

“This is family TV right right?Â I can’t really tell you,” was the response with a smile when Chris Taylor was asked what was said in the first intermission. There’s a tremendous amount of respect for the coaching staff and it’s showing by the way players react.

The coaching staff and players have connected early in the season in a way that we haven’t seen in a long time here in Rochester and it’s paying off. It’s been a roller coaster ride only ten games into the season but this is a team that can be built upon as the season progresses.

Chris Taylor is very familiar with previous seasons here when players would drop their heads and think here we go again and that was the end of a game. He added, “It doesnâ€™t matter if they (the other team) score on their first shift, doesnâ€™t matter. Itâ€™s how weâ€™re going to respond to that and thatâ€™s a process.”

The team bounced back big time scoring six goals within a nine minute span of the 2nd period. The last time the Amerks scored six goals in a period was December 16, 2006 against the Binghamton Senators.

Garret Ross, Kevin Porter, Brendan Guhle, Kyle Criscuolo, Eric Cornel and Hudson Fasching all scored in order and a combined 11 players tallied assists. To look at it a different way, only four skaters on the roster didn’t register a point tonight.

Criscuolo said, “We were scoring goals in different ways which is good to see.”

When asked about everyone contributing Kevin Porter replied with, “Third, fourth line chipped in, everyone I thought played pretty well for majority of the game but the big thing is we have to play 60 minutes. We do that and weâ€™re going to be a scary team.”

Brendan Guhle earned a lot of praise after the game. He’s had an up and down start to the season but he’s learning and making progress by being receptive to feedback and watching a lot of video of his play. In the overtime he had brought the puck back behind Ullmark and went end to end creating a scoring chance. He was beat earlier in the game on a goal against but he bounced back. Chris Taylor commented on that saying, “He had a tough start and rebounded and thatâ€™s what we want out of these guys. We donâ€™t want heads down thinking here we go again the whole game and waiting for the next game. No its next shift, start improving.”

Taylor added, “He wants to make the NHL and that’s big for me. His drive is much more than points here, he wants to be an everyday NHL player.”

A very humble Eric Cornel was happy to be moved up in the shootout lineup, “I didn’t have to wait, it was nice for the coach to have confidence to send me over the boards again.”

Ullmark allowed one goal in the shootout when Wayne Simpson pumped the breaks and wrapped the puck around the pads. CJ Smith scored for the Amerks glove side on Pheonix Copley before Cornel scored on the same side for the win.

Cornell added, “It was a big character win, we’ve come from behind a couple of times so far this year, it’s a good feeling when you do that, obviously you don’t want to spot them a three goal lead but it’s good for our character and confidence.”

Kyle Criscuolo, “Weâ€™re a group that hasnâ€™t been together for too long and weâ€™re still finding our groove as a team and finding ways.”

The Amerks are back on the road Saturday night in Utica, the same team that they beat this past Wednesday in a shootout where Cornel had also scored the winner.

Here’s highlights from the game (parts with no audio is normal):