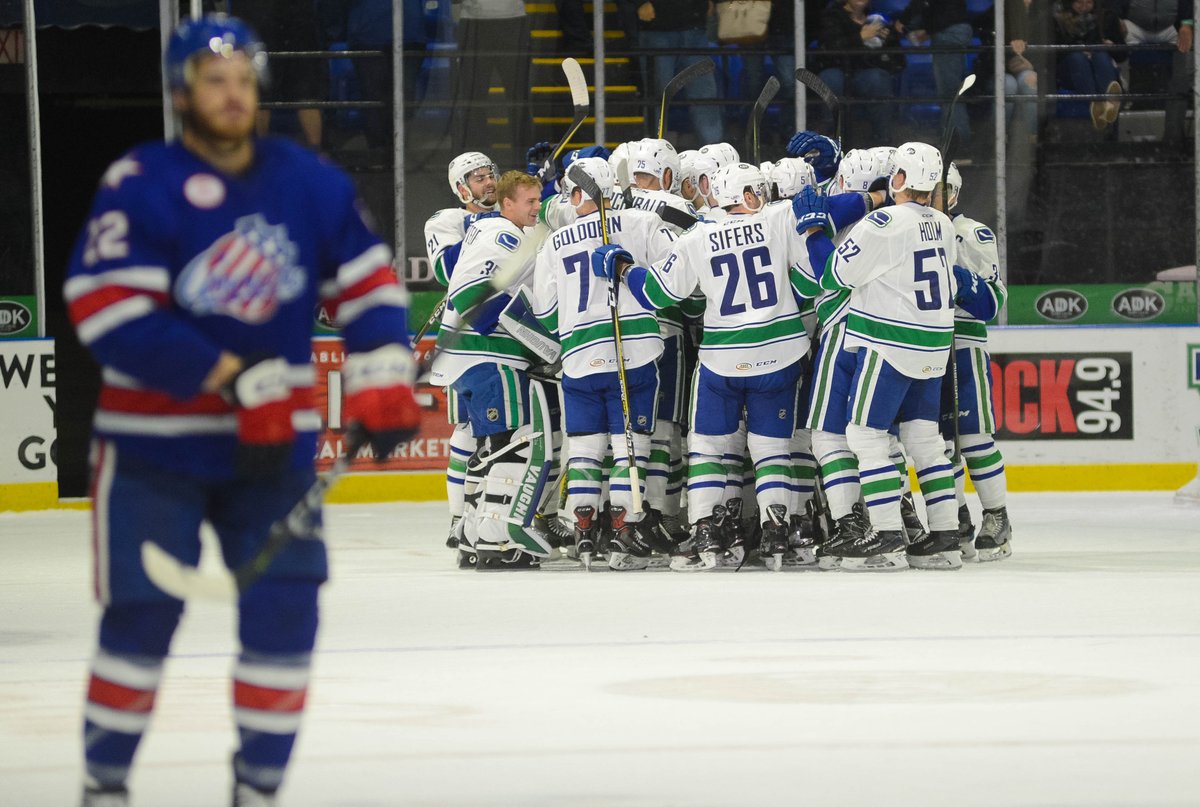 The odds were stacked against the Amerks on Saturday night down by two goals off of a couple of bad bounces and they were having penalty problems all night but they did what they’ve become good at, keeping their heads up and finding a way to come back shift by shift.

The first period was a pretty steady back and forth game which was surprising since they had to kill off five penalties including one five on three. The period ended with the Comets gaining momentum and it carried over to the second period.

Two goals were scored by the Comets in the second off of some odd bounces but the star of the period was Adam Wilcox with 18 saves.

Anton Rodin scored when he attempted a cross ice pass but as Barry Goers went down to block it the puck went in off his skate and in the net.

Rodin gets his first of the year from MacEwen! #RCHvsUTI pic.twitter.com/77kkDNxQ7E

The second goal against was a dump in that took a bounce off the glass as Wilcox went to play it.

In previous seasons heading into the third period we could have expected the team to just hang there heads and go through the motions but for the second time in two nights the Amerks bounced back shift by shift. At no point were they completely out of the game.

Sahir Gill lead the charge at 2:35 of the third period with an assist from Brendan Guhle and Zach Redmond. Guhle took the initial shot and Gill redirected it over Comets goaltender Richard Bachman.

1st goal for the #Amerks vs Utica on Saturday: @guhles_ carried it in and @SahirGill28 with the redirect! pic.twitter.com/M8yRa1ZPAe

Not too long after at 4:59 the Amerks tied the game when Brendan Guhle fired a rocket over the right shoulder of Bachman with assists to CJ Smith and Steve Moses.

Amerks goal highlights will be available on Sunday.

Very little happened the rest of the period as both teams played some smarter hockey staying out of the penalty box and being conservative with the puck.

In the three on three overtime the best scoring chance went to CJ Smith after Zach Redmond forced a turnover but Bachman made the save.

After two straight shootout wins off of goals from Eric Cornel it was obvious he’d get the shoulder tap but he wasn’t able to pull it off. Bachman stopped Cornel, CJ Smith and Kevin Porter in the shootout.

Nikolay Goldobin scored the lone goal in the shootout and the Comets won. Credit where it’s due, he’s a sniper.

The Amerks finished with the week with two wins in three straight shootout games. Five out of six points with two multiple goal comebacks and two road games in there is yet another positive building block for this team.

There’s work to do in the week ahead but at least the team continues to be resilient and that says a lot about the character of the team.