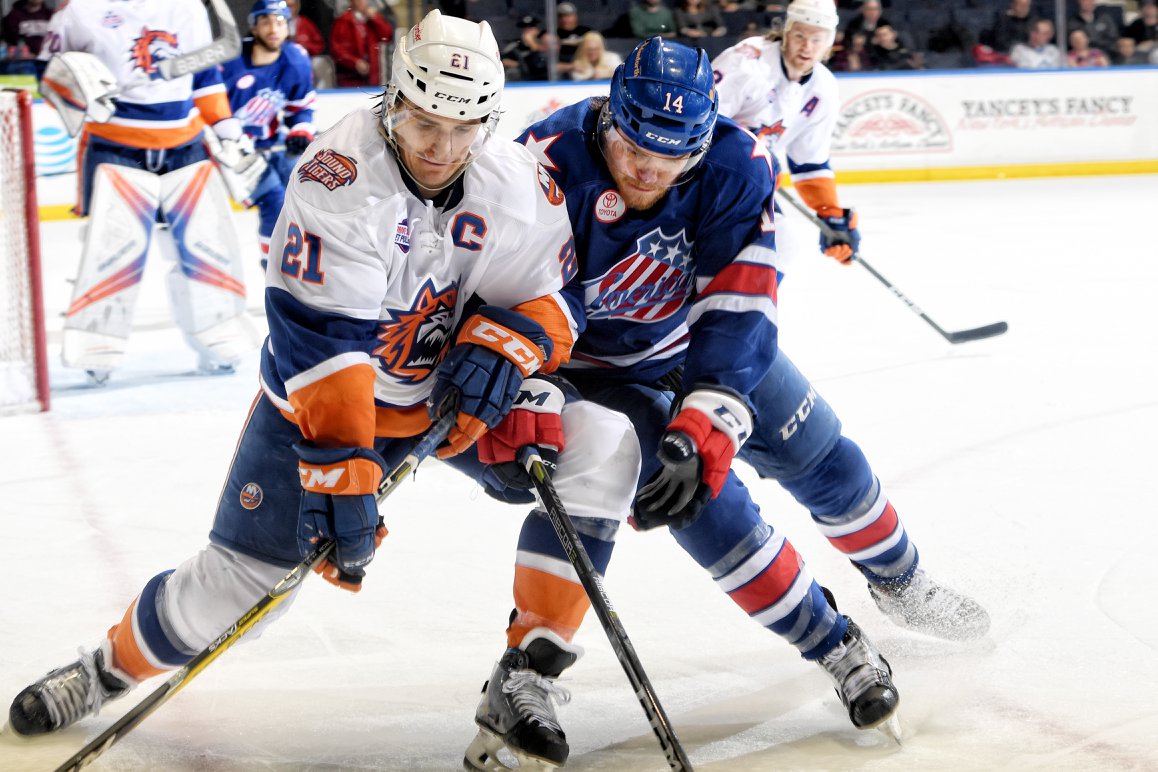 The story repeats itself: Team doesn’t show up for a majority of a game and then a mistake results in an overtime loss.

Travis St. Denis scored the easiest goal of the night 93 seconds into overtime standing all alone in front of Linus Ullmark and the Sound Tigers departed town with the win.

The Amerks ended the third quarter of the season and it was bad. The 19 game third quarter stretch they were 3-7-5-3. They haven’t strung together back to back wins since January 5 and 6.

Through 57 games the Amerks have a 27-30 record. The message from the start of the season was that they wanted players to learn how to win and even though they’re in a guaranteed playoff spot they aren’t winning games, they’re gathering points.

42.1% of Amerks games this season have gone into overtime. In overtimes and shootouts they’re 9-15. That’s a lot of points to give up.

Linus Ullmark was asked if he was happy getting a point and he simply answered, “No.”

Michael Dal Colle scored the first goal of the game by simply cruising to the front of the net and picking up the rebound. Credit to Kyle Criscuolo for following the play down the ice and attempting to break it up. Matt Tennyson stood by poking his stick at the play.

Sean Malone scored the only goal of the game for the Amerks on Wednesday by crashing the net and poking in a loose puck. Alexander Nylander made his only play of the game getting the puck down low and taking the initial shot.

Credit Andrew MacWilliam as well for a blocked shot and winning a battle for the puck that sent the play out of the Amerks zone.

The game started well in the first period, was ok in the second and it was just bad in the third.

Justin Bailey took a bad penalty early in the third period. Justin Danforth took two different penalties, both questionable, but it was still time on the penalty kill. The other 14 minutes of the third period were just downright boring.

Rochester only managed three shots against Bridgeport in the third.

New guy Danny O’Regan saw a lot of playing time in his first game on the top line with Kevin Porter and Sahir Gill. Power play, penalty kill and took a face off but finished the game without any shots on net.

All eyes were on him to see what he could bring to the team and fans left the building knowing his number. A mistake in overtime resulted in the game winning goal.

A no look pass next to the Sound Tigers net resulted in a turnover, the play took off into the Rochester zone, O’Regan blocked a pass attempt, attacked the puck on the boards along with Taylor Fedun, Josh Ho-Sang chipped out a perfect pass to St. Denis and game over.

He took ownership for the mistake saying, “I kind of wish I could redo that one, tough to leave Ullmark in that situation because he played great all game.”

O’Regan he left the ice during practice on Monday afternoon to find out he was traded, packed up what he could, flew across the country, joined the game day skate Wednesday morning and jumped right into top line minutes on Wednesday night.

After the game he said he didn’t have his “A game” and was out of energy. Easy to see why. We’ll give him a couple of games to get settled in.

Linus Ullmark was asked what the team needs to do and he said, “For me to go out there and say what we need to be doing better is kind of hypocritical. I’m out there saving pucks, people are out there blocking shots every night so that’s all I can ask for my players to do and help me out back there.”

The first half of the season showed a lot of promise and excitement, the second half isn’t looking so good.

There’s 19 games left in the season to figure out how to play a 60 minute game, something that teams shouldn’t continually struggle with after 57 games.

Will they suddenly turn into contenders in the playoffs? That’s the only hope or it’ll be an early first round exit from the playoffs and no one will be satisfied with that.