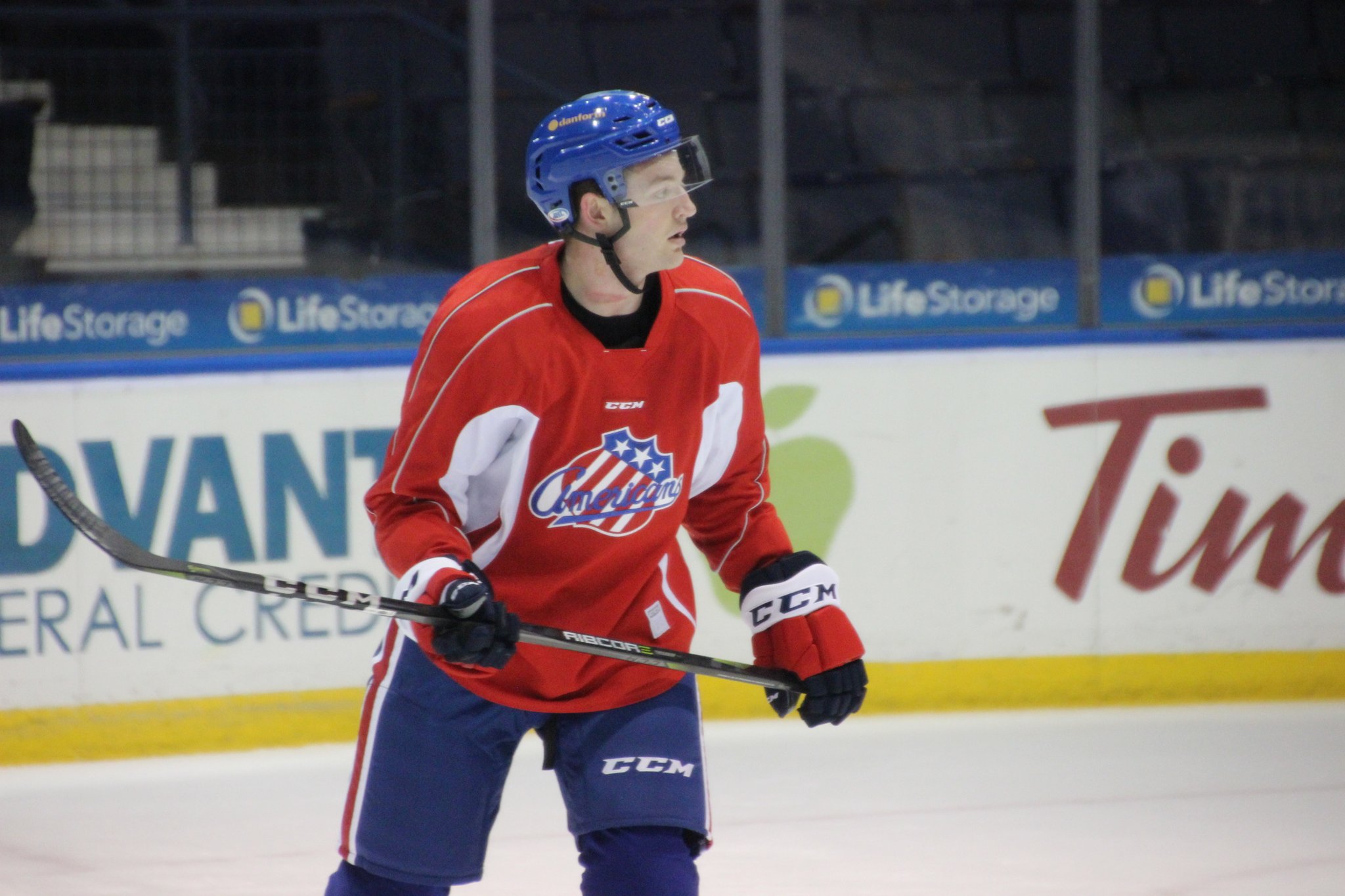 Will Borgen made his debut at Amerks practice on Tuesday morning fresh off his season ending at St Cloud State and starting his pro hockey career. The contract was finalized over the weekend, he flew out on Monday, started practicing on Tuesday.

In his first pro practice he was paired up with veteran defenseman Nathan Paetsch to take him through the first practice.

Borgen was asked to describe his play and said, “I’m a physical defenseman. I like to just play my role, play defense and get the pucks to the forwards and let them do the offense.”

Buffalo Sabres GM Jason Botterill was on WGR550 with Howard and Jeremy and when asked about Borgen he said, “We love his footwork. We think he’s an excellent skater on the back end. He’s extremely strong and physically down low. He’s made a huge jump over the last couple of years at St Cloud. He’s had the opportunity to go over to the Olympics. Just goes to show how much respect USA Hockey has. There were four college players named to that team and Will was one of them.”

“Coming into college I came in right away as a true freshman. I had a couple of 24/25yr olds on my team when I was 18yrs old so I adjusted there. At the Olympics I was practicing against some older guys,” when asked about turning pro and playing against bigger players. “I’ve been kind of used to it for most of my life.”

Jumping right into his pro career is taking away the disappointment of his college season ending early. He said, “Helps a little bit because I get to play hockey again. The seasons not completely over for me now, I’m excited to be here but it sucked for my season to end early at St. Cloud.”

As a player, he’s had a big season. A member of the 2018 Olympic team, turning pro and he said the highlight of the season was winning the Penrose Cup with his St Cloud State team.

He was on the roster for Team USA at the 2018 Winter Olympics but didn’t get any playing time. He did get the chance to practice with Brian Gionta and also talked to him about Rochester. Borgen said, “Brian said it was awesome, came here before the Olympics and scored a goal.”

College teammate Judd Peterson joined the Amerks on Monday and they reunited as roommates at the hotel before practice today. [ Read more about Judd Peterson here ]

“It’s awesome, nice to have a familiar face,” on being here with Peterson. “Someone I know personally around when I’m meeting all these new guys.”

Two college teammates, both draft by the Buffalo Sabres, both on the same pro team in The AHL with the Rochester Americans but two different phone calls to join the team. Borgen made a call, Peterson received a call.

On deciding to leave college early and turn pro Borgen said, “I was thinking about it a little bit during my college season. I was focused on school and my team there but after the season I talked to my advisor and I just felt like I was personally ready to move on from college and take the next step in my career.”

Called his advisor, his advisor worked out the deal with Buffalo and here he is. He still has some online classes to finish the semester, said he didn’t just throw out all of his college work the moment he signed the contract.

The option exists for a draftedÂ  college player to stay in school and become a free agent. Asked about that Borgen said, “Every once in a while I get tweeted by a fan or something thinking I wasn’t for some reason. Buffalo is the team that believed in me and drafted me so I wanted to stick with them, that was my plan all along.”

Judd Peterson was on the bus ride back and got a call that Rochester wanted to bring him in to play. He had been talking to his agent prior and they weren’t really sure if there’d be a spot for him in Rochester with the number of players on the roster.

Borgen already has his entry level contract for the 2018/2019 season, Peterson is going to be playing to prove that he deserves a contract as well.

Taylor on whether Borgen or Peterson will be playing,Â “Today I haven’t made a decision on who’s playing tomorrow and what our lineups going to be. I have to see how they feel, how they look. I have a lot of respect for the guys that have been here all year and what they’ve done all year for us.”

“Everybody is fighting for positions and jobs so we’ll what happens, we have a lot of guys in our room right now.”

“Judd Peterson has a lot of speed up on the wing,” Taylor on what could influence the decision for them to play. “Will Borgen is a big defenseman and we can use some grit sometimes back there. I’m intrigued by both of them.”

There’s nine games left in the Rochester Americans season and they’ll both play at some point.