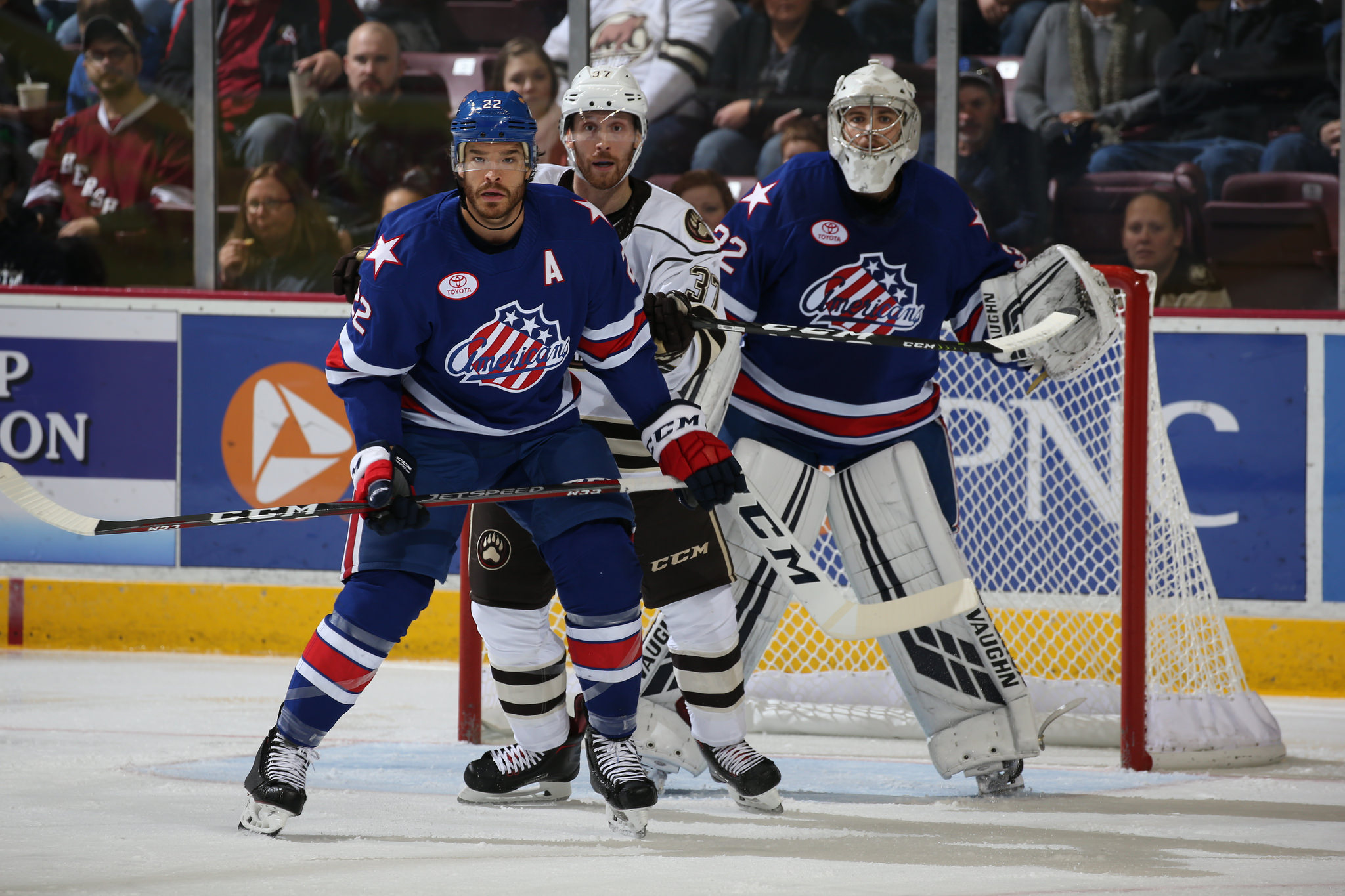 The first period started off slow again for Rochester but at least it lasted less than four minutes, not the full 20. They team bounced back after being down early in the first and finished the game with a pretty solid 4-1 win.

The penalty kill was perfect with a short handed goal from Kevin Porter and also stopped Hershey on three chances.Â The power play came up short for the third straight game and 16th power play chance in a row. That isn’t as much of an issue when you’re winning by scoring five on five goals.

Zach Redmond scored twice, including the game winner, and tied Victor Olofsson for the league lead in points. At this pace we’ll see a 50 goal season from Zach Redmond. The Amerks all time record for goals by a defenseman in a season is 18 by Rick Pagnutti in 1972-73.

Adam Wilcox earned the win and is now 3-0-1 this season. It wasn’t an easy game for him, he had to bail the defense out often, mostly from Brendan Guhle turnovers.

Why couldn’t they have played this way last night and won on home ice? Hopefully it was a lesson learned because they responded tonight and earned two points in the standings. Rochester now has 17 points out of a possible 20 in the last 10 games.

After starting the season looking like an improved hockey player we’re back to wondering about Alex Nylander. He was benched in the third period on Friday night and was back to coasting again tonight. He didn’t have a shot on goal tonight.

Here’s a recap of the scoring in the game:

Derek Hulak put Hershey up 1-0 at 3:35 of the first period redirecting a shot from the point by Connor Hobbs.

Hershey takes an early lead for the 2nd night in a row. Long shot by Hobbs redirected in by Derek Hulak. pic.twitter.com/5sW92ZL4lZ

That seemed to wake the team up because after that goal was scored the Amerks took control of the game.

Zack Redmond scored an unassisted goal with 61 seconds left in the first period after creating a turnover along the boards. He took the puck, went below the goal line and snuck it past Samsanov.

Redmond scores his 7th of the season and tied the game 1-1 slipping the puck past Samsanov. pic.twitter.com/5UrqUHioUP

Rochester finished the first period with a 15-7 advantage in shots and it was clear that they were in control of the game at this point.

The second period continued where the first period left off controlling the pace of play.

Zach Redmond scored again for his eighth of the season with assists from Wayne Simpson and Lawrence Pilut. Simpson sent the puck from the goal line and Redmond unleashed his rocket of a shot from the point.

Redmond scored his 8th of the season with a rocket! #Amerks are up 2-1. pic.twitter.com/11dNKcjnnM

Kevin Porter scored a short handed goal at 16:24 of the second period for his third goal of the season. CJ Smith took the initial shot, the rebound went to the side of the net where Porter was in position to put it in the net.

CJ Smith takes the initial shot, Kevin Porter scores off the rebound for a shorty. #Amerks are up 3-1. pic.twitter.com/iCBDHn01Qo

Dalton Smith is another player that has improved from last season and over the last few games has been all over the ice hitting bodies and creating scoring chances. It paid off at 7:19 of the third period when he scored his first goal of the season. Assists to Will Borgen and Eric Cornel.

Dalton Smith scores his first of the season! #Amerks are up 4-1. pic.twitter.com/ZqCl31iCYp

Danny O’Regan was awarded a penalty shot with 1:12 remaining in regulation but was stopped by Samsonov.

Samsonov with the save. pic.twitter.com/YOAWwut8au

Rochester will head home from Hershey and prepare for a big game in Buffalo on Wednesday vs Cleveland. It’s still early in the season but so far it’s Rochester and Cleveland at the top of the North Division standings. This could be an early preview of the top of the division.