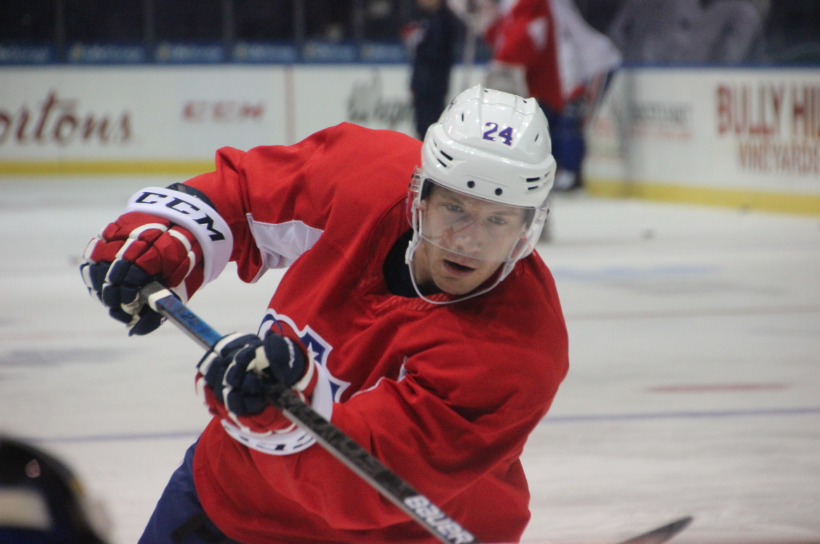 The Rochester Americans will have a new face on the blue line tonight when Matt Hunwick joins the team on a conditioning stint. The veteran defenseman has been out of the Buffalo Sabres lineup all season as he recovered from an off season neck injury that occurred during a workout.

“It’s been a long summer/start to the season here. It’s been a patient process, trying to be patient at least with it,” Hunwick said after the Amerks morning skate. “I thought I was ready for training camp but it’s not middle of December and finally getting on the ice.”

Talking about recovering from the neck injury Hunwick said, “There were a couple of minor setbacks that were a little frustrating but it’s one of those things that takes time and unfortunately you can’t rush it, wish we could’ve. Sometimes you just have to try and be patient and then when you get the clear and go ahead you kind of go all out and that’s what I’ve been doing the last few weeks.”

He said he hasn’t been frustrated at all having to sit back and watch the start of the Buffalo Sabres season. “I was excited, the team is doing great and a lot of fun to watch,” he said. “Obviously you want to be a part but at the same time there’s only so much you can do with an injury so it just makes you that much more excited to heal up and get back into the lineup.”

He’s going to be in a lineup for the first time this season against the Binghamton Devils. Both Phil Housley and Chris Taylor talked about him being available for more than a game but no commitments have been made yet for the Amerks home game on Friday night against Cleveland.

Chris Taylor talked about Hunwick saying, “We want him to just get comfortable right off the bat. It’s not easy coming into the middle of the season here and on a conditioning stint and the injury he’s gone through. We’re just going to get him out there and make him feel comfortable and get him into the game. His skill will take care of itself.”

The Amerks roll three lines of defense playing consistently throughout the game and tonight isn’t expected to be any different. Taylor said Hunwick is going to get a lot of minutes between regular shifts along with special teams – power play and penalty kill.

Asked what he’ll bring to the team Hunwick said, “Hopefully I come out and play well. Try and get my decision making and thinking on my feet back after such a long layoff, I just need to get back to moving the puck and seeing the ice. Those things you try and replicate in practice but the speed and intensity of the game is where you really find out how ready you are.”

“Just excited to get out there and get going.”

It’s rare to find a hockey roster where players haven’t crossed paths at some point. Matt Hunwick knows Zach Redmond from skating with him over recent summers and had trained together a few years ago in Michigan. He’s also close friends with Kevin Porter, both went to the University of Michigan together.