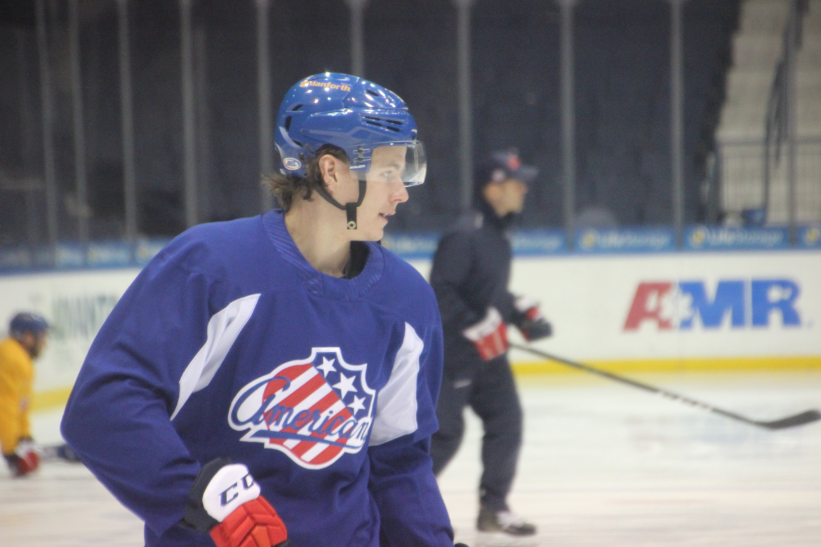 Victor Olofsson returned to Rochester this week after getting a taste of the National Hockey League, the place he’ll likely play for the rest of his career when this season is completed. In six games with the Buffalo Sabres he scored two goals, had two assists, and fit right in with the level of play.

“It was awesome. A great experience for me to get the feeling of the NHL level,” Olofsson said after Amerks practice when asked about his time in Buffalo. “It was a lot of fun for sure and I’m really excited to be back and finish the year off here.”

At practice this morning he was reunited on in his line with Rasmus Asplund and Danny O’Regan, a line that has played together for the bulk of the season. The talent the three of them show on the ice speaks for itself. I asked Olofsson about being reunited and he said with a smile, “It’s only been two weeks but it feels longer for sure, good seeing them again.” Danny O’Regan missed the last three games with a day to day injury. The three of them were all smiles before practice as they warmed up.

Asked about what he learned in Buffalo he said, “Just get the feeling of what it’s like and what to expect. Obviously that’s where I want to play in the long run so it’s nice to know what to expect coming into next year.”

Everyone can agree that he can expect a roster spot with the Buffalo Sabres next season.

What if he didn’t get the chance to be called up? Would it have hurt his confidence or development? Unlikely.

“I would have been happy with my development either way,” Olofsson said when asked those questions. “I think I’ve been taking some huge steps in my overall work ethic and especially my defensive work ethic has improved a lot since the beginning of the year. It feels a little bit better to have been up there and get to compare yourself to world class players. I don’t know if I feel like I developed more because I went up there but it was really nice to just get a feel of the game.”

Chris Taylor talked about the confidence level of Olofsson after the call up saying, “I think it gave him confidence with scoring a couple goals up there. Anybody who scores in the NHL will have confidence coming down here. He’s a great kid, works hard, and is determined about what he wants in his career. He knows he has to play well down here to make sure they’re looking for him for next year. He wants to be a guy that’s recognized that ‘hey, he can play. Maybe we should keep a spot for him for camp next year.’ Every individual on the team has to be good for the Sabres to notice.”

When Olofsson started his North American career in Rochester the question wasn’t if he would adapt to the North American game but how long would it take. The answer was less than two weeks. In the first six games of the season he tallied 12 points (5G+7A). He quickly adapted to the American League game, learned the ropes, and then stepped into the National Hockey League and showed that he belonged.

Olofsson talked about nerves before his first Sabres game and said, “I was nervous before the first game. I think every guy when they make their NHL debut is a little bit nervous. After a few shifts it felt like I got into it pretty quick, played my game more, and felt more confident for every game. At the end I felt really comfortable and confident so it was a great feeling.”

Put AHL where NHL is in the above quote and that could’ve been from the first two weeks of the season in Rochester.

I asked Olofsson if there’s still unfinished business in Rochester he said, “Every guy in this locker room wants to win something here together. I think we have a great team and we have a good chance to make a deep playoff run. I’m looking forward to it and super excited to get into the playoffs.”

A few other practice updates:

Lawrence Pilut is also back with the Amerks and just like his previous return is just as confident.

Remi Elie and Andrew MacWilliam had maintenance days and did not practice.

Alex Nylander didn’t skate either. He had missed the last two games in Buffalo after having to get stitches on his leg.

With three games left in the regular season the team still has one goal – keep winning and work for that division title. They were in first place for majority of the season and that’s where they want to finish.