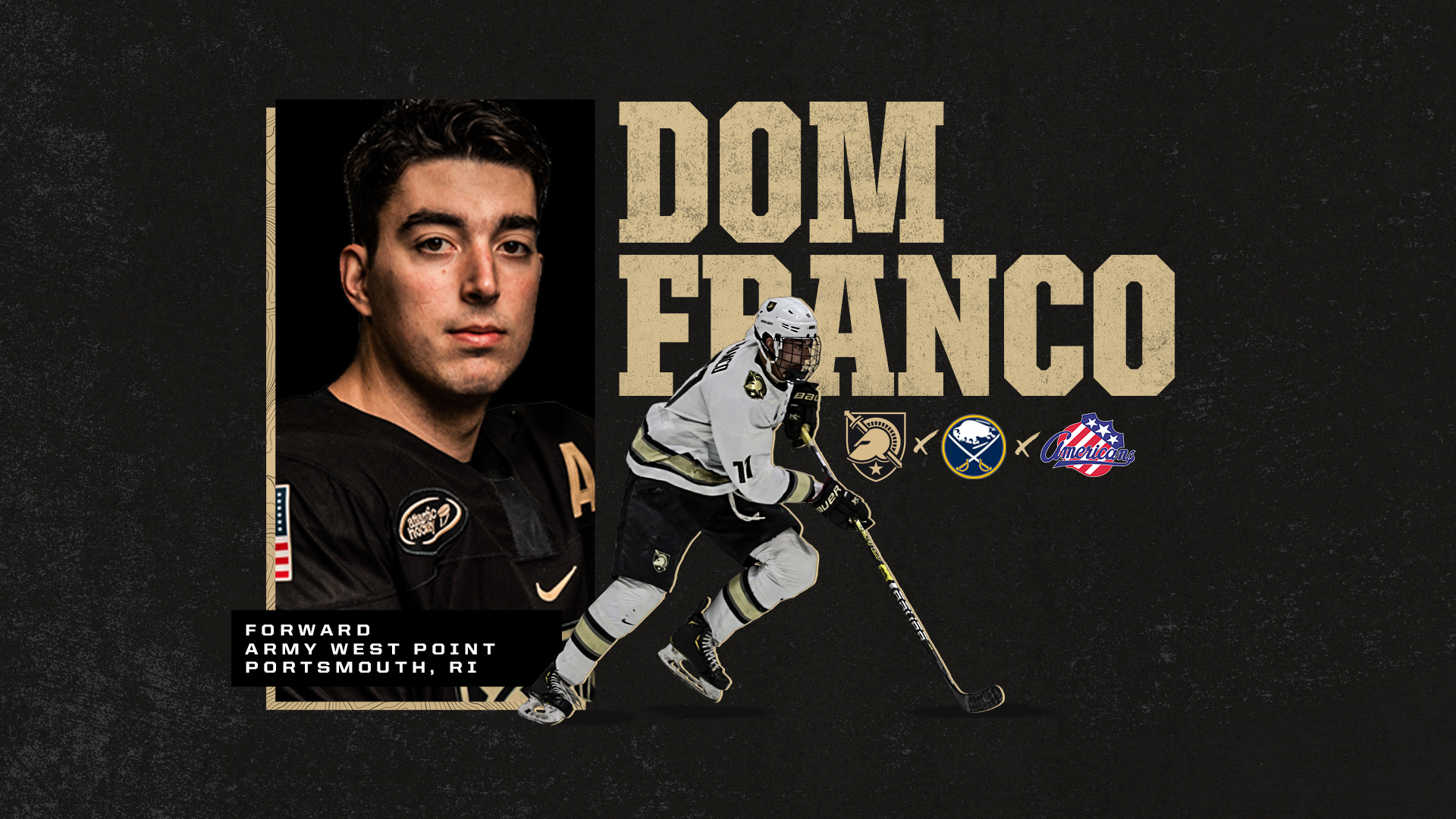 There’s always a first signing in the off-season and Dominic Franco is that player and he’s also the first player to sign a professional contract following a rule change. Franco signed an American Hockey League contract with the Rochester Americans for the 2020-2021 season (whenever that will be). The rule change is a memorandum that was signed by the US Defense Secretary that allows athletes to delay their mandatory five years of active duty service to play professional sports after they graduate.

Franco is a 6 foot 5 inch scoring forward that can’t be missed in the offensive zone and he also has a scoring touch.

For more about him click through to The Buffalo News article along with the press release from Army West Point.

Dominic Franco planned to spend part of his summer at Fort Sill in Oklahoma. Instead, the former Army forward is preparing for his first season with the Sabres' organization.

More on the rule change that allowed Franco to pursue his dream:https://t.co/Q9ozG8p8OX

He is the first hockey player to receive a professionalÂ offer inÂ the sport of hockey since the secretary of defense endorsed aÂ policyÂ in November making it possible for exceptionally talented athletes who have graduated from a military service academy to pursue employment as professional sports athletes following graduation.Â  Once approved, he will be permitted to delay his commissioning and subsequent service obligation to pursue employment as a professional sports athlete.

“We are extremely proud of Dom,” saidÂ Mike Buddie, Director of Athletics, Army West Point. “He has earned this opportunity through his hard work and determination while representing the Corps of Cadets on the ice. After spending 47 months training to serve our country, I am thrilled for Dom to have this opportunity to continue his hockey career, and am convinced this will only make him a better officer when that time comes.”

A 2019-20 alternate captain, Franco recently completed his senior season for Army as the leading scorer for the third-straight year. A four-year starter, Franco garnered Atlantic Hockey All-Conference Second Team honors this past season and was named to the All-Rookie Team in his first season. The Portsmouth, R.I., native has posted a team-leading 22 multi-point games including seven multi-assist performances and four multi-goal contests. Franco has recorded double-digit goals in the last three seasons.

“We are very excited about the opportunity the Buffalo Sabres Organization has given Dom,” said head coachÂ Brian Riley. “He has had a great four years here at West Point and there is no doubt that we are going to miss him. On the ice Dom is one of those players that has the ability to take over a game because of his skill and size. Most importantly he has represented this program and this Academy in a way that has made all of us proud. We look forward to watching him play at the professional level and we wish him much success.”

The graduates of each of the military service academies are obligated to serve in the armed forces for a minimum five years as commissioned officers immediately following graduation.Â The provisionÂ signed into policyÂ in November allows the secretary to offer select athletes the opportunity to serve as enlisted members in the individual ready reserve of the armed forces while employed as professional athletes until such a time as the secretary tenders their appointment as commissioned officers in a military service.

The mission of the Army West Point Athletic Association is to provide an extraordinary Division I athletic experience that develops leaders of character committed to the values of duty, honor and country.

From the Rochester Americans press release:

Rochester Americans General ManagerÂ Randy SextonÂ announced today that the team has agreed to terms with Army forwardÂ Dominic FrancoÂ on a one-year American Hockey League contract for the 2020-21 season.

Franco, 24, recently completed his senior season at West Point, leading the Black Knights in scoring for the third straight year with 23 points (10+23) in 33 games while serving as an assistant captain. His best season came during the 2017-18 campaign when he paced all Army skaters with a career-high 30 points as a sophomore while also leading the team with six multi-point games.

A native of Portsmouth, R.I., Franco enjoyed a breakout season a freshman in 2016-17, ranking third on the team with 22 points (9+13) in 34 games, earning him a selection to the Atlantic Hockey Association All-Rookie Team.