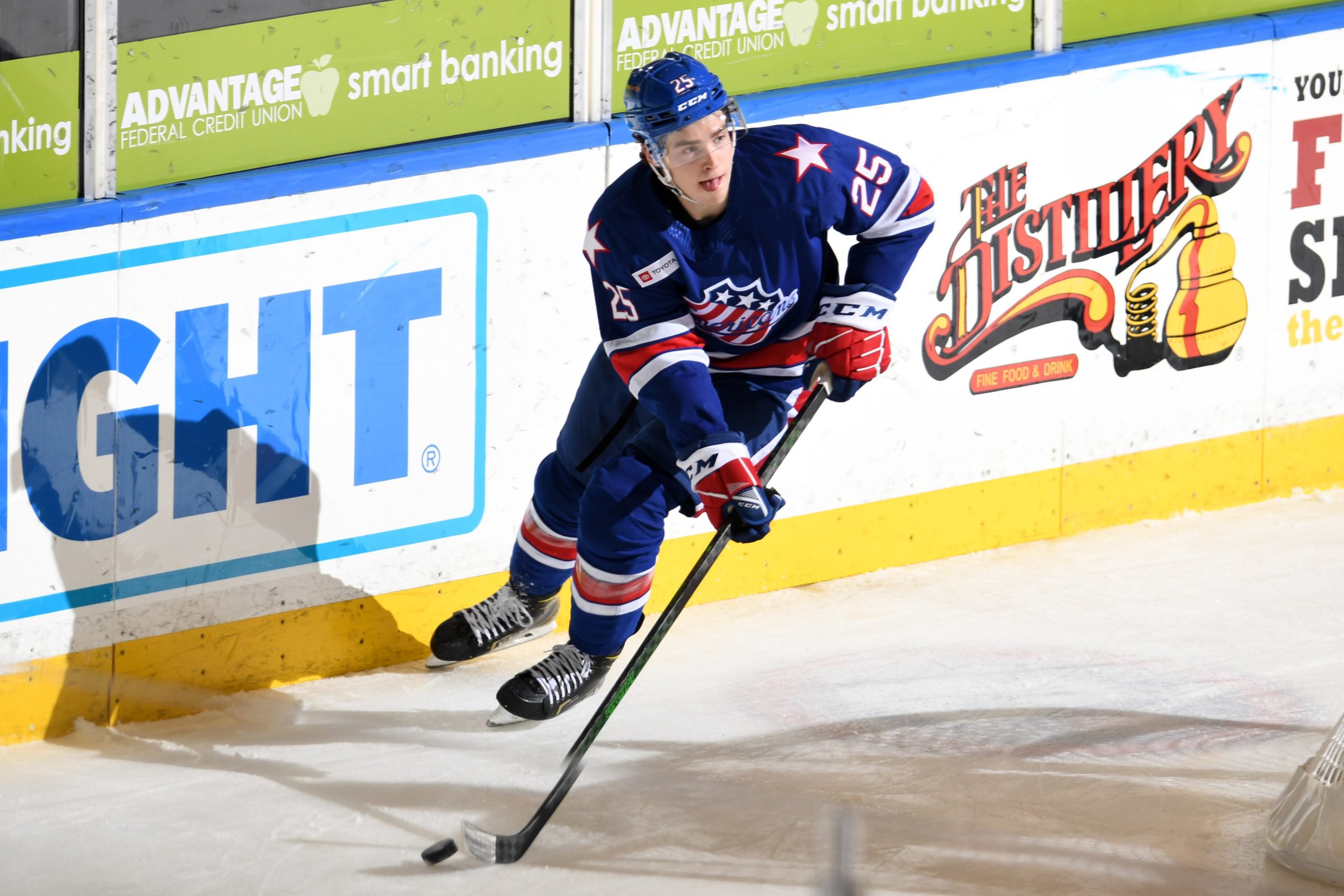 The Rochester Americans played their first home game on a Thursday night in almost 10 years and the spotlight of the night goes to Jack Quinn who played in his first professional game. He was on the ice for opening face off paired with veteran forwards JS Dea and Remi Elie. He had an assist on the game tying goal, saw the ice in overtime, and scored a shootout goal to help extend the Amerks winning streak to three games with a 4-3 win over the Utica Comets. An impressive debut for the Buffalo Sabres most recent first round pick.

After the Thursday morning pre-game skate Quinn had said he wasn’t sure what to expect and added, “It’s my first pro game. I think I’m ready to play in this league and prove it.”

Seth Appert said after the game, “Jack did a good job. That wasn’t an easy job, that was a game for men.”

What he meant by it being a game for men was that it was nasty and physical. The refs were letting the teams play hockey and no one was taking it easy out there. An environment where other 19 year olds have struggled but that wasn’t the story tonight.

Quinn said that his comfort level grew throughout the game. “That kind of sums up my game,” he said. “I was pretty shaky the first period. Kind of a wake up call not playing a bit. There’s some big guys out there and I thougth I got a lot better as it went on in the second and third. I definitely feel a lot more confident now with one game under the belt.”

He found his way after the first period saying, “I think some time in the second our line had a good shift and I got a shot on net and kind of settled in from there.”

First shot on net for Jack Quinn. The only real offensive highlight so far. pic.twitter.com/8DWGUqW2iW

The line had another great shift not too much longer when JS Dea created a turnover that resulted in another shot by Quinn and Remi Elie was in position for the rebound and the second chance.

Dea created the turnover, picked up by Quinn with a shot, Elie had a second chance. pic.twitter.com/P37cuxOX8M

Those were the only real offensive highlights for the first 39 minutes of the game until JS Dea scored a power play goal with 56.7 seconds left in the second period.

(scroll down for all of the scoring replays)

Rochester was down 3-2 late in the third period when Steven Fogarty tied the game with a power play goal by tipping a shot from the point by Oskari Laaksonen. Quinn earned a secondary assist on the goal.

Talking about the play Quinn said, “Laaksy moved it over to me, I went down the wall a bit, and the forward pressuered me from the top. I knew Laaksy would be open since the forward pressured me so I just kind of threw it back there knowing he’d be open and good tip by Fogarty.”

A well executed play between two rookies and then the redirect by the veteran captain of the team.

Each team only had one shot on net in overtime before going to the shootout.

Utica scored once in the shootout but the Amerks were victorious with goals by CJ Smith, Jack Quinn, and JS Dea.

Seth Appert talked about his choices for the shootout and said,Â “We don’t have alot of guys with alot of numbers in shootouts historically when you look at it analytically. Whether that’s a lot of attempts or a lot of success. It’s not as much based on well these are our three or four guys because history says it. It’s probably more this year based on gut feel by our staff. My gut feel with how he played in the second half of the game and then making the play to help tie it up.Â Well, first of all, CJ was going to go. I’ve thought that CJ has just been so terrific for us. I had a lot of confidence in him starting us out and I didn’t really waiver that Jack was going to go next.”

On being selected for the shootout Quinn said, “I wasn’t expecting to be selected but I was also ready. I think a shootout could be one of my stronger suits. I think goal scoring is something I’m good at so I was ready to go if called upon and was lucky enough to go.”

“With the shootout you just have to go out here and try to make a move,” Quinn said. “I made a move, the goalie bit and I was able to put one in. I just try to focus on the task at hand.”

When asked Thursday morning what Appert liked about Quinn he had said,Â “His approach and his attitude everyday. If you look into his background. At 15yrs old no body knew who he was more or less thought he was going to be a first rounder. Sometimes guys are groomed to be top five, top ten picks. Jack earned it. He was given nothing. He wasn’t given early entry to the OHL. He wasn’t a first round OHL pick. Was never expected to make Team Canada. He just keeps earning things from his work ethic and humble attitude.”

It was only one game of many more to come for Quinn but he earned the opportunities as the game went on and was successful. He wasn’t gifted the playing time or shootout chance because it was his first game, he earned it. In his first professional game we saw more in Quinn as a rookie forward at a young age than many others that have come through the American Hockey League.

Rochester has now won three straight games after losing the season opener. The next game is Saturday night in Syracuse.

Here’s the additional highlights and scoring from the game:

Lukas Jasek PP goal puts the Comets up 1-0. Must have gotten the redirect. pic.twitter.com/Zbtjkequ69

Matej Pekar gets his first roughing penalty before a face off. Wasn't much but the ref thought different. pic.twitter.com/xbGzou7tMW

Remi Elie puts the #Amerks up 2-1 just 16 seconds into the 3rd. Assists to Dea and Bryson. pic.twitter.com/pfbFan0d8X