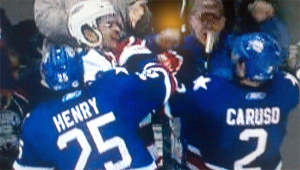 The Amerks had a 5-0 lead through 24 minutes of play and what seemed like a game that should go on and end as another big win against the Crunch but it almost turned into the opposite.Â  The Crunch battled back and scored two goals half way through the third period but it wasn’t enough.

Rochester has now won all nine games this season against the Crunch.Â  A big difference from the last few years when the Crunch were dominating the games.Â  As with most Amerks games this team gets you excited and on the edge of your seat and by the end of the game you’re biting your nails.

They found a way to score early big goals but keeping that up throughout the game was yet again an issue.

Jimmy Bonneau gave the Amerks an early 1-0 lead at 6:23 of the first period when he tipped in a shot/pass from the side boards to the front of the net from Jordan Henry.

It only 65 seconds for the Amerks to take a 2-0 lead thanks to Evgeny Dadonov for tipping in a pass from Daniel Steiner.Â  Chris Taylor had been chasing down the puck and he over skated it along with the Crunch defender following him.Â  The puck was just sitting there for Steiner to make the pass to Dadonov.

Clay Wilson closed out the scoring of the first period with a goal at 19:27 to put the Amerks up 3-0 after one period.Â  Chris Taylor and Max Gratchev fought for the puck and were able to clear it to Clay Wilson who skated in and beat Kevin Lalande.Â  Graham Mink did not get a point on the play but he did a great job screening Lalande just prior to Wilsons shot.

At 17:07 the Amerks took a 4-0 lead off another goal by Jimmy Bonneau tipping in a John de Gray slap shot from the blue line.Â  In less than 20 minutes Bonneau has doubled his total goals for the season.

Victor Oreskovich and Mike Duco did an excellent job setting up Scott Hotham who scored at 3:54 of the second to put the Amerks up 5-0.Â  Oreskovich crossed the blue line, spun around and tapped the puck over to Mike Duco.Â  Just after Duco got the puck he passed it to Hotham crossing the blue line and then Oreskovich and Duco went separate ways and the defenders followed them creating an opening for Hotham.

Interesting to note that half way through the second period the only players without a +1 or higher were Jamie Johnson, Mike York, and Graham Mink.Â  A great team effort with production from just about everyone.

Brendan Bell got the Crunch within three goals at 9:29 of the third period with a shot from the side boards looking for a tip in from Jordan LaVallee-Smotherman but instead Rory Fitzpatrick tipped it in past Salak.

The Crunch were on the power play after Steve MacIntyre was called for a Match – Attempt/Deliberate injury penalty for what sounded like a cross check to the throat of Kevin Harvey.Â  That penalty comes with an automatic $200 fine and will be investigated by the league.Â  MacIntyre could see a suspension of some sort for that move.

That seemed to turn the momentum a little bit.Â  Evan McGrath scored two minutes later to make it a 5-3 game with less than nine minutes remaining.

The Crunch continued to lay it on late in the game but the Amerks managed to hold on and win 5-3.

Once the final buzzer sounded Alexander Salak took a moment to try and celebrate as Tom Sestito was skating by and ran into Salak.Â  Jordan Henry and Michael Caruso were there and stepped in.Â  That started a big pushing and shoving match.Â  As both of the benches emptied and the players were headed to the locker rooms Kevin Harvey went after Jimmy Bonneau and the two of them started throwing punches.Â  As Harvey was being led to the locker he went to kick his helmet and fell to the ice and then he turned around and pushed linesman Justin Prusak.

As expected the game ended with Salak taunting the crowd by pumping his fists and setting the tone for the final game of the season between these two teams on April 10th.Â  If the game does not mean anything to either team in the standings I imagine it’s going to be an ugly game.