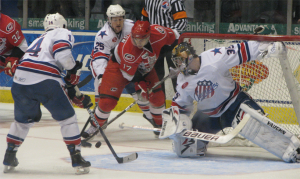 The Amerks did something they have not been able to do for a while, play an entertaining home game.Â  Unfortunately the game went downhill as it went on and they ended up losing.Â  Albany scored a power play goal at 7:04 of the third period to take a 4-3 lead and from that point on they controlled the game.

Tyler Plante talked about that fourth goal after the game and said that he went to raise his blocker and it got caught on the pants of a player to the side of him.

Rewinding a bit, the Amerks got on the scoreboard at 5:39 of first when Chris Taylor scored his 13th goal of the season.Â  Evgeny Dadonov fed a great pass to the front of the net where Taylor put it in with a slap shot.

Mike Duco went in the penalty box for throwing a punch and on that power play Drayson Bowman scored for the Rats to tie the game 1-1.

Jordan Henry put the Amerks back in the lead scoring a power play goal of his own at 17:28 in the first.Â  Mike York made a great pass through the middle of the ice to Henry who had a lot of time to pick his shot and that he did.

And then Bryan Rodney scored the game winning goal at 7:04 on the power play in the third period.

I think the biggest factor missing in this game was Jeff Taffe.Â  Taffe was called up and hopped on a flight across the country to San Jose where the Panthers play the Sharks on Saturday afternoon.Â  As we saw last Sunday he made the big play late in the game to score the game winning goal.Â  Put Taffe on a line with Jamie Johnson and Mike York and your chances are pretty high of something happening.

It also would have helped to have the speed and skill of Michal Repik.

It would also be nice to see Evgeny Dadonov have a breakout game.Â  He makes a lot of great passes and a lot of great attempts at breaking through opposing players but all too often the puck is knocked off his stick.

It’s taken a while but this seemed to be a game where Steve MacIntyre led the charge and led it hard.Â  He had a couple of huge hits.Â  He practically took on the entire River Rats bench.Â  He got into a great fight and led the game with 19 penalty minutes.Â  Unfortunately he did not scare the Rats in any way and the Rats did not back down.

The four game winning streak leading up to Friday nights game was impressive and the team has made some great progress working together as a team.Â  The one area of weakness now showing is the goaltending.Â  Alexander Salak and Tyler Plante have been good for most of the season but when it’s come time for that big save they have not come through.

If the team could play a hard hitting physical game for 60 minutes I’m pretty confident they would win and possibly even dominate games.Â  Unfortunately as the game goes on they seem to lose some steam.Â  It was a disappointing loss but not at the same level as many other Friday night games.

The Amerks have won the previous eight games this season but the Syracuse team they’ll be facing on Saturday is a different team.Â  They’ve played better hockey over the course of the season and are fighting to try and reach the playoffs.Â  Salak will get the start on Saturday in Syracuse.