In a rare post these days on the site, I thought I’d follow in the steps of George Richards showing off the new lid of Tomas Vokoun and post pics of the new lid being worked on by Dan Lessard of rembrantsbrush.com for Amerks goalie Tyler Plante.Â  The lid is (obviously) inspired by the 1993 movie Tombstone. On one side is a big picture of Doc Holliday who was played by Val Kilmer and on the other side is Wyatt Earp who was played by Kurt Russell.Â  The chin of the mask has a badge that says Tyler Plante with the #35 in it.Â  The one thing that needs to be changed though is the removal of the six shooters.Â  Apparently people higher up don’t want an image of guns. Lame. 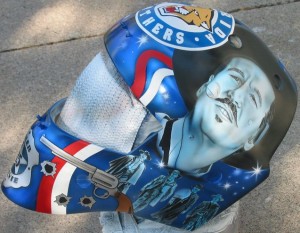 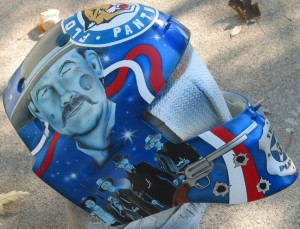 Go back in time three years and it’s when we first posted pics of the current helmet featuring Ricky Bobby and Chazz Michael Michaels.