As of writing this there’s about 8,700 tickets sold for tonights game and everyone is aware of the excitement and anticipation for the game tonight. Â The players are even aware that it’s their time to shine and prove to fans there’s a reason for them to keep coming back for more after the home opener.

“It’s real important for us to go out and showcase ourselves and showcase that we have a good team and a team worth cheering for,” Derek Whitmore said. Â “Rochester loves a winning hockey teams and they’ll support you, it’s almost like an audition for us to showcase what we have.”

As expected, Drew MacIntyre will be the starting goalie for the Amerks in tonights game. Â Once the Penguins finish their morning skate will try and post an update with their goalie as well.

The latest short term injury for the Amerks is defenseman Dennis Persson. Â He has a lower body injury from earlier this week in practice and is day to day.

With Persson and Drew Schiestel out of the lineup it gives Joe Finley and Nick Crawford a chance to step in and show they’re just as deserving to be in the lineup. Â Matt MacKenzie is the extra defenseman.

Ron Rolston mentioned that the initial thought process on the injury to Schiestel was believed to have been 4-6 weeks but the next day they found out it’s not anything close to that. Â No timetable was given on his return.

Paul Szczechura is still out of the lineup and has not been cleared for full practice. Â Szczechura was injured at the end of last season in the playoffs with the Norfolk Admirals and it has been a lingering injury. Â No timeframe has been given on his return.

With everything going on tonight from the red carpet to number of fans in the building it’s something that the players and coaching staff are aware of also hoping to keep from being a distraction.

He also talked about how the players need to be channeling the energy and passion in the right direction once it’s time to play.

“Us as players have to fuel off of everything and be excited and ready to go when the puck drops,” Whitmore said. Â “Once 7:05 hits and it’s puck drop time I think all the other stuff kind of gets put on the back burner and it’s time to get down to business and play hockey.”

Also, there’s been talk of the scoreboard and it has been upgraded and is ready to go. Â It will have the score, time, penalties and shots along with better video! 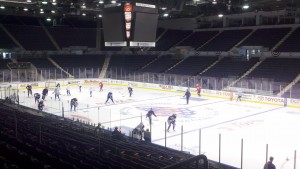