The 2012 version of the American Hockey League All-Star festivities ended on Monday night and for the most part I’d say it was another successful event. Â The skills competition was “so so” and the game itself didn’t get exciting until the last half of the third period when the West realized it needed to make a comeback. Â One of the real highlights was the mascots game during the first intermission and the Hall of Fame induction ceremony featuring Joe Crozier.

One complaint I heard from people who weren’t there was that they didn’t like the fact that the game wasn’t in a league city. Â If you weren’t planning on going anyways does it really matter? Â Atlantic City was an excellent host city with a lot to do at all times. Â The fact is that cities haven’t been banging down the door trying to host the game so when the opportunity was there for AC the league accepted.

Rob Sanderson (Drop the Puck Radio) and I arrived in Atlantic City a little later than expected on Sunday morning and met up with Bob Howard (Power Play Post Show) at the Boardwalk Hall for Rob’s weekly show on WHTK 1280AM. Â The three of us talked hockey for an hour and you can hear the archive here: Listen to DTP #55 at Boardwalk Hall

The skills competition was Sunday afternoon and for the most part wasn’t very exciting. Â I think part of that was that the crowd had a tough time hearing the PA announcer which made it hard to really understand what was going on down on the ice and hearing results which in turn didn’t get much of a reaction from the crowd. Â I spent much of it taking pictures from ice level and you can see those pictures here on Facebook. Â Feel free to share and use them, just give me credit please! Â For a quick recap with results on the skills competition you can read it from The AHL here.

Hopefully in future years The AHL will get away from the “Breakway Relay” and go to a straight shootout contest. Â The breakaway relay is timed so it doesn’t give the players as much time to get creative and have fun. Â I think it’d also be awesome to get the mascots involved as well. Â Have a few mascots from each conference selected to a team (voted on by fans?) and then participate in the skills competition. Â It’d add another level of amusement and it wouldn’t take away from the players. Â That’s my opinion at least. Â Take it a step further, have the ref’s and linesmen participate in a fastest skating competition! Â Maybe even compete against the players?

After the skills competition there was a post skills party inside of TheÂ PalladiumÂ Ballroom atÂ CaesarsÂ that featured music, drinks, food, air hockey tables and a lot of hockey fans hanging out! Â These events are as much about meeting new people and then hanging out again year after year.

The morning of the All-Star game itself features the annual state of the league address with David Andrews, President of the League. Â Things are going pretty well in the AHL right now so no one was expecting anything ground breaking and there really aren’t any pressing issues we all hoped to get answers too. Â Teams are doing well. Â “Staged fighting” has all but disappeared. Â Cities are secure. Â You can read my recap here and also check outÂ Jonathan Bombulie’s recap here (he covers the WBS Penguins) and Tim Leone’s recap here (he covers the Hershey Bears).

Once the state of the league address was over everyone headed over to Circus Maximus for the AHL Hall of Fame Induction. Â This years class featured Joe Crozier, John Stevens, Jack Gordon and Zellio Toppazzini. Â My main focus of course was Rochester Americans legend Joe Crozier. Â You can watch the video here and also read my recap of his part of the ceremony. Â Tim Leone has a great writeup on John Stevens, former Hershey Bears defenseman. 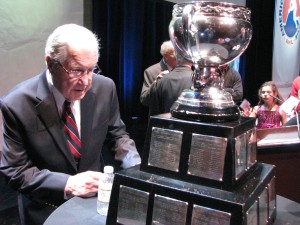 As for the game itself, like I said above it wasn’t all that exciting until late in the third period when the West decided it was time to make a comeback. Â Check out TheAHL.com’s recap here. Â Zack Kassian represented the Amerks for the West and was a -2 with three shots on net. Â He had a couple of decent chances, this picture being one of them: 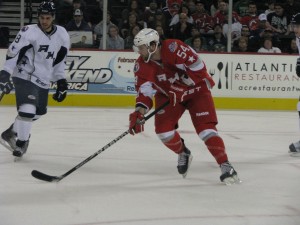 Want to see more pictures from the All-Star game? Â You can see those on Facebook here.

My good friend’s from Binghamton Bob Howard and Jason Wilcox also recorded a lot of audio and have started publishing it to the Power Play Post Show web site at http://pppshow.net. Â If you aren’t a regular to that site you need to be, the best place to hear interviews from players around the league!

The real highlight of the game was the mascots game during the first period intermission. Â I counted about 20 mascots from around the league there to have a good time. Â The mascots were there from start to finish for both days and could be seen greeting fans inside of the arena as well as on the boardwalk outside.

Here’s a full album of all of the mascots on my LetsGoAmerks Facebook page. Â Rochester Americans mascot The Moose was one of the goaltenders and he did an excellent job. Â PS… Tux from the WBS Penguins is the best mascot in the world.

During the game the Bulldogs mascot was given a penalty shot and after he scored all of the mascots did the Tebow, check it out:

If I had a say I would vote on the AHL All-Star game being in Atlantic City every year. Â The crowd of 6,113 was decent even though in some area’s it looked empty. Â There was a lot to do before and after the events. Â The hotel rooms were affordable and the travel was easy. Â All of us who live in AHL cities love where we live for many reasons but we all know giving a lot of visitors something to do can be a challenge depending on the weather in late January. Â The weather in Atlantic City was amazing so it made things even easier. Â The league is set to announce what city will host the event next year and the planning will start again!

Anyone who was there or watched on TV probably has this song stuck in their head. Â A group of us had fun singing this loudly while winning at the slot machines after the game.

If you follow myself on Twitter @LetsGoAmerks or Rob Sanderson @DTPRobSanderson & @DropThePuckWHTK you probably saw that we also made a stop at Seaside Heights to visit the Jersey Shore house. Â Don’t judge us. Â You probably watch the show too. Â It was surprising to get into a discussion about hockey with the guy working at the Shore Store while we bought some shirts. 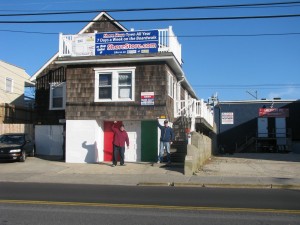 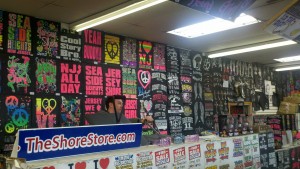 Great trip to Atlantic City to see some hockey.. Ted Black has said that he’d like to see the All-Star games in Buffalo and Rochester again but neither will happen in 2012. Â Thanks for reading!