I’ll always find goalie helmets in hockey fascinating because of the stories some of them have behind them. Â David Leggio is debuting his new helmet this week which again has a split theme between the Rochester Americans and Buffalo Sabres. Â The new paint job is because he has a new helmet from Bauer that they believe will be safer and fit his head better. Â He’s been using the new style helmet in practice for a while now getting used to it while still using the previous style in games. Â He’s finally comfortable with the style so he sent one off to DaveArt to get painted. Â This helmet isn’t as colorful as the last one but it again has some great things involved.

The left side of the helmet has the word Americans across the top along with a portrait ofÂ Terrence K. Crow who was killed in action over in Iraq in 2005. Â Terrence K. Crow was the father of one of Leggio’s friends. Â He was also on the first helmet Leggio wore. Â There’s also a charging buffalo coming from the cage. Â For more on Terrence K. Crow click the link above, more was written on the article about his old helmet.

The right side of the helmet has Rick Jeanneret. Â Every hockey fan growing up in Buffalo or anywhere as a Sabres fan knows Jeanneret and it’s someone you immediately think of as part of the Sabres franchise, that’s why Leggio has him on the helmet. Â There areÂ also coins for teams that Leggio played for growing up: The Amherst Knights and St. Joseph’s Collegiate Institute. Â There’s also a coin of the US Treasury and a Buffalo Nickel.

The front chin has the red and white stripes, the center of the helmet has stars and there’s also the Presidential Seal logo on the forehead.

Leggio said that he gave DaveArt the groundwork and rough draft for what he wanted on the helmet and it was all put together after that. Â It was a collaboration of ideas and DaveArt did an amazing job splitting it between Rochester and Buffalo. 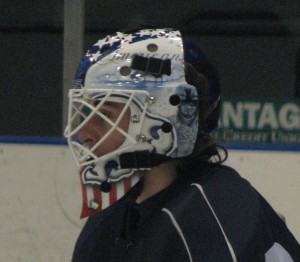 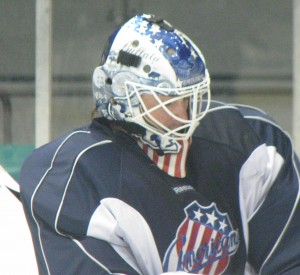 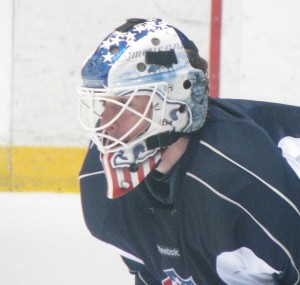