It was only one game but it was an enjoyable game. Â Out of 18 skaters on the ice only five ended the game without a point for the Rochester Americans, a pretty impressive accomplishment. Â There were seven different players who scored goals and 11 different players tallied assists. Â The last time the Amerks had a high scoring effort like that was December 16, 2006 when they had a 10-4 win over the Binghamton Senators. Â In that gameÂ Stefan Meyer (3), Drew Stafford (2), Marek Zagrapan (2), Dylan Hunter, Kamil Kreps, and Clarke MacArthur scored.

The Stars took an early control of the game chasing the Amerks all over the ice and creating numerous turnovers but by the end of the period the Amerks were up 2-0. Â Kassian opened the scoring at 11:13 of the first period with a wrist shot from the top of the left face off circle past Texas Stores goalie Andrew Raycroft. Â Maxime Leagult scored the second goal tipping in a Shaone Morrisonn shot from the blue line.

And then something similar happened in the second period, the Stars scored two goals and the thought of the 2nd period collapse back in December was on the minds of many. Â Matt Fraser scored at 2:05 of the second on the power play and then Mike Hedden put a slap shot through a wide open five hole of Drew MacIntyre just under a minute later at 3:04 of the second. 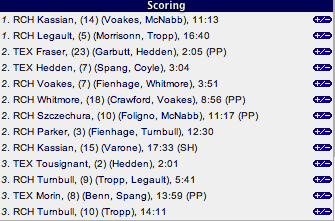 And then less a minute after the Stars scored their second goal, Mark Voakes followed up for the Amerks to regain the lead. Â Corey Fienhage took the initial shot from the top of the right face off circle and the rebound went to the left where Voakes was able to put it in.

Derek Whitmore scored his 18th goal of the season on the power play with a one timer into an open net. Â Nick Crawford had great vision with a cross ice pass to Whitmore who was patiently waiting not being hassled by any defenders. Â As soon as Whitmore received the puck he buried it past Raycroft.

Paul Szczechura scored what turned out to be the game winning goal less than three minutes later at 11:17 of the second on the power play. Â Marcus Foligno brought the puck to the Stars net and put a shot on Raycroft and the rebound went again to the right where Szczechura was there to score. Â Zack Kassian and Phil Varone were also around the net and close but Szczechura got there first.

And then 73 seconds later Jonathan Parker took a huge weight off of his shoulders scoring his first non shootout goal since October 16. Â It was a fluke kind of play but a goal is a goal. Â Corey Fienhage had brought the puck across the blue line but fanned on his shot and as he did that he spun around to try and back hand it towards the net. Â The puck went off of Jordie Benn of Â the Stars and Parker was trailing the play and able to grab the puck and shoot it between the legs of Benn and past Raycroft.

Andrew Raycroft was pulled from the game at that point.

Zack Kassian closed out the scoring for the second period with a short handed goal at 17:33 in the period. Â Kassian took the puck down the side boards and to the bottom of the face off circle where he picked his shot and beatÂ Tyler Beskorowany who was in to replace Raycroft.

Mike Hedden lead the way for Mathieu Tousignant to score to make it a 7-3 game. Â Hedden skated to the net and just put the puck at the pads of MacIntyre and the puck bounced high into the air. Â MacIntyre, Schiestel and Fienhage all lost site of the puck and Tousignant was able to tap it in.

For the Amerks eight goal of the game Corey Tropp circled the back of the Stars net and tried to go for the wrap around. Â Maxime Legault was in front of the net and tried to score on the rebound but Travis Turnbull went to the net as well and was able to get his stick on the puck.

Travis Morin scored the fourth and final goal of the game for the Stars at 13:59 of the third period on the power play. Â Joking around I said that MacIntyre allowed the goal on the purpose just to keep his goals against average consistent.

Travis Turnbull closed out the scoring at 14:11 of the third period. Â He was able to score off of his own rebound for his second goal of the game and 10th of the season.

It was a rare high scoring game for the Amerks and entertaining. Â Everything finally seemed to be going right for them with passes, goals, blocked shots and the power play. Â They’re back on the ice at 7:35 against the San Antonio Rampage and will need a similar performance tonight. Â The Rampage beat Toronto with a 5-4 overtime win on Friday night.