It’s a perfect time to write a familiar name, Michal Repik scored the game winning goal on Saturday night at the War Memorial in downtown Rochester. Â Repik scored two goals leading the San Antonio Rampage to a 4-1 win over the Rochester Americans. Â As for the Amerks, they were present in uniforms but not in any other way. Â There was very little effort compared to the 9-4 rout over the Stars the night before. Â The game on Friday night gave a glimpse into what this team is capable of playing on all cylinders and on Saturday the team showed one of the reasons it could miss the playoffs completely.

The Amerks played back to back home games and had the chance to sleep in their own beds and to be well rested for the game. Â The Rampage arrived in Southern Ontario last Monday and have been living out of hotels and riding a bus, they were the team that should be starting to wear down but that wasn’t the case at all.

Luke Adam was sent to Rochester on Saturday afternoon and the expectations were high to see what he’d be capable of and by the end of the game he just looked like another member of the team. Â Adam was called for two penalties, both of which gave the Rampage the chance to score power play goals and they did just that. 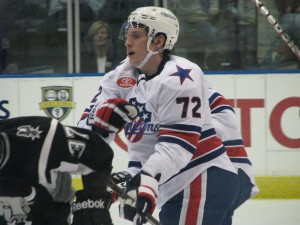 The scoring opened at 14:19 of the first period with the Rampage on the power play. Â Mark Cullen put a simple shot on net but David Leggio couldn’t keep a hold on the puck and James Wright was able to tap the puck into the net.

Luke Adam was in the penalty box at the time for tripping, a call that had upset the Amerks bench. Â There’s no doubt it was a penalty but referee Geno Bindo didn’t raise his arm to cal the penalty until after the Rampage players made a motion wondering where the call was.

The only Amerks goal was scored at 8:02 of the second period when TJ Brennan blasted a shot from the blue line past Rampage goaltender Dov Grumet-Morris. Â Paul Szczechura had the puck about ten feet from Brennan and simply slid the puck over to Brennan who let the puck fly.

Amerks defensemen Brayden McNabb and TJ Brennan were beat pretty good by Evan Barlow and Michal Repik to put the Rampage up 2-1 for what turned out to be the game winning goal. Â Barlow brought the puck across the blue line beating McNabb and with Brennan all alone on the two on one a cross ice pass from Barlow to Repik beat Leggio.

Mark Voakes had an excellent chance shortly after that but was hesitant on the one timer and Grumet-Morris had more than enough time to get in position to stop the puck with his mask. Â The Rampage immediately brought the puck out of their zone and with all five Amerks players on the ice drifting to the right side it left Bill Thomas wide open to bury a pass from Mike Vernace.

The game was well over at that point. Â The Amerks weren’t showing their usual go at it grit in trying to come back. Â The passes weren’t connecting and no pressure was being mounted against the Rampage. Â There wasn’t a physical game in any way. Â The Rampage were playing the game they wanted to at that point. 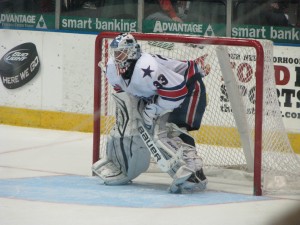 Michal Repik scored his second goal of the game of the game with Luke Adam in the penalty box again, this time for slashing. Â The Rampage took the puck to the net and continued to hack away at it in front of David Leggio until it went in.

The Rampage had a 4-1 lead heading into the third period, still enough time for a come back but also doubtful based on the way the game had progressed. Â Rochester had two power play opportunities in the third period but they weren’t able to produce anything. Â A lot more was expected with a power play unit of Paul Szczechura, Luke Adam, Marcus Foligno, Brayden McNabb and Shaone Morrisonn. Â They weren’t able to create any scoring opportunities but instead chased the puck back into their end and back trying to set something up.

Inconsistency is the downfall of any professional and Saturday night was the definition of that. Â Every time the Amerks make some sort of progress in the standings they take a step back with a game like this. Â The Rampage moved up in the standings and the Amerks fell back down. Â They’re still tied forÂ eighthÂ place at this point and only five points away from fifth in the division but this wasn’t the type of game you want following up an offensive 9-4 rout the night before.

The Amerks will have the week to practice before their next game on Friday February 17th against the Lake Erie Monsters.