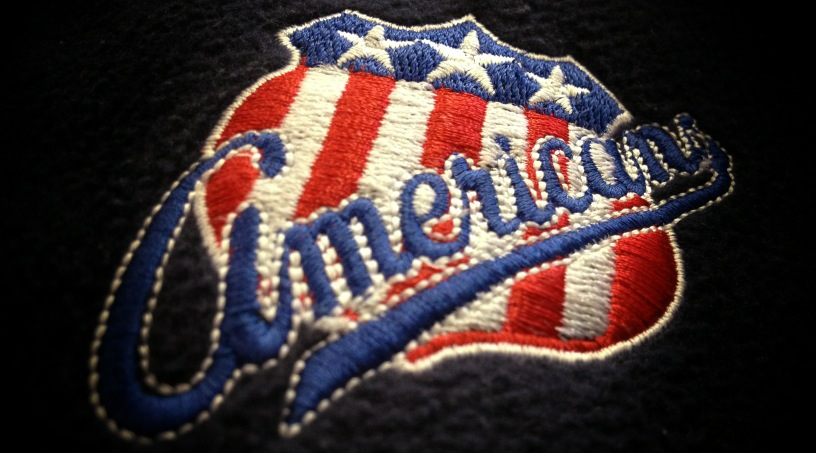 Unlike Eric I’m a relatively green Amerks fan. While Eric has admirably supported the team for more than 3 decades I’ve spent less than a decade as a fan. I discovered the Amerks after moving to Rochester for college and I only became a season ticket holder in 2011. My interest in the team coincided with the discovery of accounting discrepancies involving then team owner Steve Donner. Countless changes resulted. An awkward dual affiliation with the Florida Panthers was signed along side the existing Buffalo Sabres affiliation. This dual affiliation coupled with continued financial woes resulted in the loss of the Buffalo Sabres affiliation. The Amerks were sold. The new owner, Curt Styres, bailed the team out of its financial situation and negotiated with the city of Rochester to keep the team in Rochester. The future looked brighter…for a moment. The lack of a local affiliation and the turmoil in ownership eroded the fan base. Moral among everyone–fans, players, and staff–was at an all time low. Even for a newer fan like myself the change in attitude was evident everywhere…from the parking garage to the arena. The eroding fan base led to an increase in promotions. So many promotions that the game being played on the ice became a sideshow to what was happening elsewhere in the arena. Curt Styres gave it his all and Rochester owes him a debt of gratitude for saving the Amerks, but the fact is that the quality of product had diminished under his watch. The era without an affiliation with the Buffalo Sabres was the Amerks darkest. Fast forward to 2011. The Amerks were bought by the Buffalo Sabres and a singular affiliation with the Sabres was reestablished.

My apologies for bringing you to such a dark place, but I had to take you back to make my case. Why? Think about the 2013-14 season. Does it feel dark? Was it filled with resentment? Low morale? For the majority of fans the answer to these questions is no. Was there team spirit and local pride? Yes! Sure we had our moments. The endless string of injuries up at the Sabres didn’t help our team, but on a whole the season was a positive one. This season the Amerks managed to accomplish something they haven’t done in a long time. They earned the support and respect of the fans. The past three seasons have been one of transformation but it was this last season that had that special feeling. We had the outdoor winter classicâ€”Frozen Frontier. A dramatic push into the playoffs. In the arena fans started to connect with each other. Thousands of seats were filled in the midst of a white-out blizzard and thousands more in the final weeks of play. The Amerks made the front page of the D&C. They were the subject of every prime-time news cast when they clinched a playoff spot. For me, the importance of this season really hit home when I made the Wednesday night trip to Utica with the hope that the Amerks would clinch a playoff spot (they did!) and I was greeted by dozens of Amerks fans. People took time off from work to see the Amerks play on another team’s home turf. That says a lot about the fans but it says even more about the transformation that’s started in Rochester. Rochester residents take pride in their hockey team again. Ok, so we were not victorious against our first round rivals in Chicago. But we did stretch the series to game 5 and for a while there it even looked like we would emerge victorious. That’s a whole hell of a lot more than they’ve accomplished in recent history. We didn’t win. So what? Passionate hockey is back in Rochester. The wins will follow. That’s why I think 2013-14 was a success.