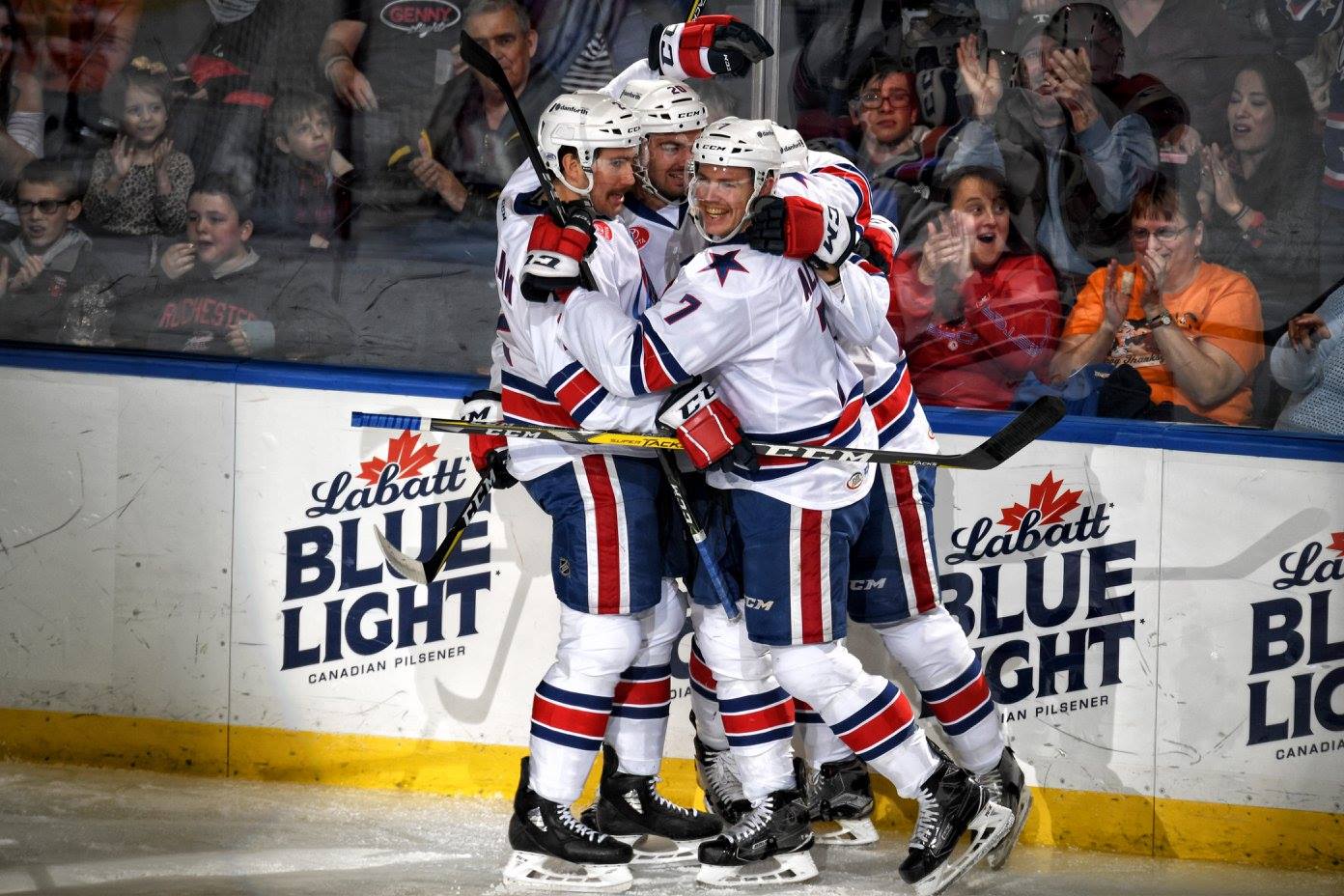 The Amerks are on the road this weekend for their first set of three games over three days. Well, technically three games in less than three days since they play on Sunday afternoon at 3pm. The team is traveling to Springfield, Hartford and Bridgeport. A long bus ride there but cities within close proximity to each other.

When asked about the first long weekend of the season Matt Tennyson said, “It’s a grind for sure. I’ve been through it before. That afternoon game is definitely a grind but that’s the American League. No real way to sugar coat. It’s not fun but find a way to battle through it.”

“It’s time to kind of get into the meat and potatoes of the season, time to get used to it I guess,” Steve Moses said about heading the three upcoming games.

One thing (of many) that the Amerks have going for them on the trip is their road record at 6-1-3-1. One regulation loss on the road in 11 games is pretty good early in the season.

“I think we’ve had some success on the road and now just have to keep it up, be consistent and play 60 minutes all three nights,” CJ Smith commented on the road record.

Chris Taylor said, “We’ve been good on the road all year so I don’t expect anything different. The guys are getting close and it’s nice to get on the road.”

Steve Moses talked about the team saying, “I think guys work hard. We have a lot of fun. A lot of good players, a lot of competition within the team. That breeds success and the atmosphere has been great around the rink.”

Matt Tennyson has only played in two games for the Amerks since the Sabres sent him to the team but he’s already made an impact especially on the penalty kill and he has noticed the key to success.

“Just buying into the system. I think everyones playing the way they need to be playing,” Matt Tennyson said. “I think we’ve just been gelling, been a lot of fun, I think guys can be relaxed, play relaxed and just have a lot of fun.”

“I think he’s very happy,” Chris Taylor said about Tennyson. “Coming down here, not wanting to be down in the American League but when he came down here just seeing the culture, what we’re doing, how we’re doing it and we’re winning so he’s very happy to be here.”

Players being happy to be in Rochester is something that has been missing. Over the course of the off season there was a lot of talk by Jason Botterill and Chris Taylor about the need to win, develop and also change the culture. They were confident that it would be done. They wanted the team to be a family and it’s happened quicker than they expected.

“We had ideas of what we thought and we’re very excited where we’re at this early in the year especially with the injuries we’ve gone through. We thought it was going to be a lot harder actually because we felt a lot of changes needed to be made,” Taylor said. “We’re extremely happy right now but we’re still a long ways away from the end of the season.”

When you look at NHL teams like Toronto, Tampa, Columbus and Pittsburgh you’ll see that their success has been built off of what they’ve accomplished with their AHL teams. Success works its way up.

The three letter word fun has been mentioned more this season than I’ve heard in the last 10 years I’ve been writing about this team.

Moses has spent the bulk of his last five seasons oversea’s playing and joined the Amerks as a new face in the organization. This may be new to anyone who’s been around but it’s normal for him. He said, “I’m new here so this is all I’ve known. I think that there’s a lot of winning players that have come over to the team that have helped, obviously Porter has been a great captain and a lot of great leaders on the team. That culture has kind of been there from game one so for me so its what I’m accustomed too.”

CJ Smith is a rookie and has recognized the leadership around the team saying, “I think a lot has to do with the leadership in the locker room. I think we have some older guys who do a pretty good job in there just keep everybody as a team, keeping everyone pretty close. I think that’s been a big part of our success so far.” He added, “I don’t think theres been a clique of vets vs rookies so to speak. I think they’ve done a good job. Everybody feels welcome in the locker room. If a younger guy does speak up it’s listened to and heard by the vets too. We have a good mix of people talking.”

One could say that there’s a lot of cliche words when it comes to team building. Words like character, leadership, family and culture. They aren’t though. They’re the requirements of a successful team. The resumes of Chris Taylor, Gord Dineen and Toby Petersen show that they’ve been around a variety of teams to know what it would take.

As they were getting ready to depart on the five hour bus ride the team shared that it’s up to the younger guys to head to the store and buy some movies. Who gets to decide what to watch? The leadership. No one knew what the choices would be but so far this season the choices have received positive feedback compared to previous years (no movie titles have been shared yet).

Chris Taylor talked about the atmosphere on the bus saying, “You want them talking on the bus. You don’t want to see them putting on headphones and doing their own conversations and watching their own movies. Everyones watching together, laughing together, playing cards together and enjoying each others company.”

“When you care about each other you play harder for each other,” Taylor said about continuing the success as the season goes on.

Quick updates on the injuries:

Barry Goers has cleared the injury report and expected back in the lineup this weekend. He’s been out since November 13.

Arvin Atwal has also cleared the injury report and is headed back to the Cincinnati Cyclones. Atwal had been hurt when he was hit along the boards early in the second period on November 18.

Nathan Paetsch (week to week), Justin Bailey (day to day) and Kevin Porter (expected back next week) are the remaining players on the injury report.