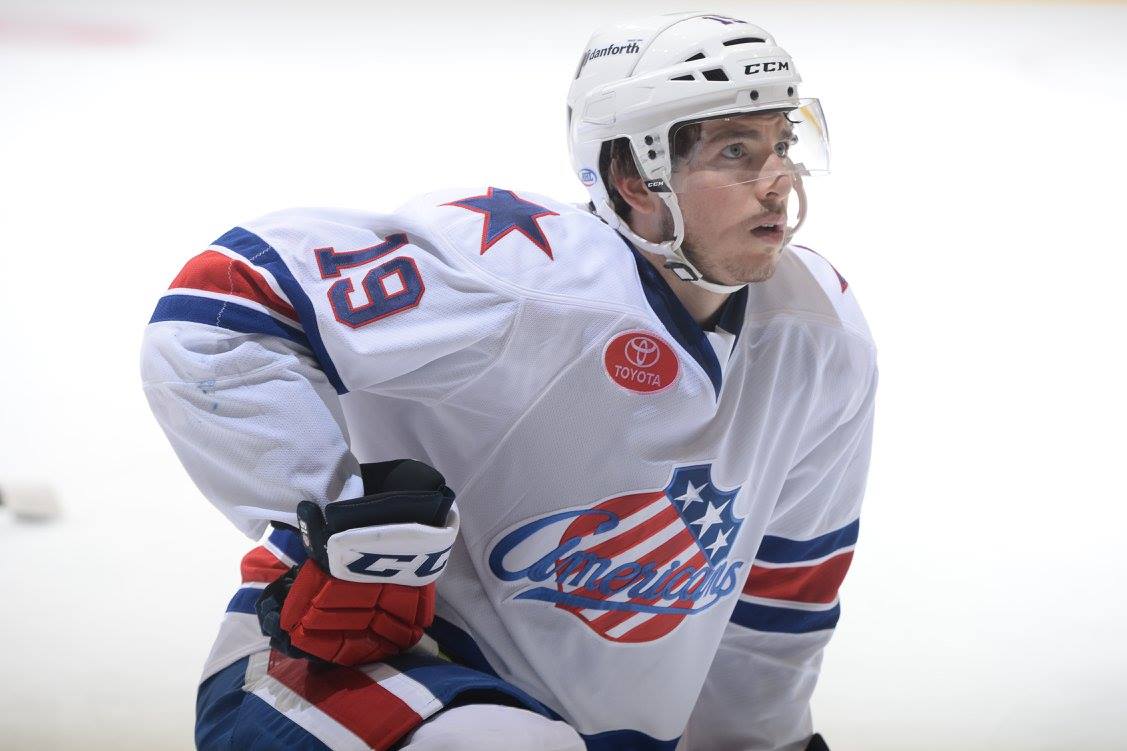 Last March when the college hockey season came to an end the Buffalo Sabres went out and signed CJ Smith, the leading scorer for UMass-Lowell. A player that was on the radar of a number of teams.

Earlier this week he played in his 26th game as a Rochester American and moved into the lead as the leagues top scoring rookie with 9G+18A and moved into 5th overall.

The point totals are impressive but wasn’t a focus at the start of the season.

“I wasn’t too worried about points coming in just to start,” CJ Smith said after Wednesday nights win. “Just trying to develop. In this league sometimes its really not about points, its learning about being consistent every night. Sometimes you play better when you don’t get a point.”

That’s the mind set of a mature player. Credit to the coaching staff as well that has been around long enough to help keep the focus on the main goal, playing in the NHL.

Chris Taylor talked about focus saying, “I think our leadership group in the room has helped him out. We didn’t have to count on him at the start of the year and he’s just kind of filled in to that role. He’s played with good players and I think he’s benefited from that. He’s also taking care of himself and what he needs to do and how he’s doing it and it’s snowballing from there. He’s getting a lot of confidence and the team has a lot of confidence right now.”

Teammate Linus Ullmark has noticed his confidence saying, “If you look at guys like Sidney Crosby and Tavares and those guys they’re not slowing down at all when they’re coming down the wing. The same thing as CJ, he’s looking more and more confident every night. If he can keep this up he’ll have a shot at the show.”

“He’s not scared to go touch the puck first in the corners. There’s a big difference. Skill, vision, smarts.. you actually have to go in there and be dirty, be one of those guys that’s not afraid to get hit. Take a big hit to make a play,” Chris Taylor said talking about his game after Wednesdays win. “He’ll go get in front of the net and he’ll go touch the puck first even though he knows he’s going to get hit hard and that’s why he’s getting more ice time.”

At 5’11” vision is something that CJ said he has always had playing hockey. “I was always a smaller player growing up. I kind of had to see my way through the game. When I grew up I played up a couple years so they were always a lot bigger. Just learned have to see the ice a lot better as a kid.”

The next step is for the coaching staff to help him keep this pace up, keep going and be an every day player. Averaging a point per game is a good start. He’s a smart hockey player which allows him to make quick decisions to be quick enough to be that player.

“Some guys just have that little extra hockey IQ as we say. He has great skill. Great hands. It’s not like he’s only using his hands and his skill. He’s also a hard working guy. He can do all those things in high speed,” is what Ullmark had to say about the skill that CJ brings.

Every hockey player has a goal of playing in the NHL. Some expect they’ll be there the moment they’re drafted. Others know they’ll have to put in some more work to get there. In The AHL players come and go that expect an NHL roster spot simply based on the depth chart. The ones who have NHL success are the ones that know they’re in the minors to be prepared for the big jump.

CJ Smith arrived with the expectations of playing here saying, “I knew I’d probably have to spend a season down in The AHL. Get a little stronger, play wth some bigger bodies, pro guys. I knew I’d be here in Rochester, just wanted to get better working out in the gym and getting better every day.”

He’s been getter better every game, is always on the ice well after practice has ended and is showing all of the signs of someone putting in the work to have a long hockey career.

Notes and Quotes for Tonights Amerks vs Marlies Game