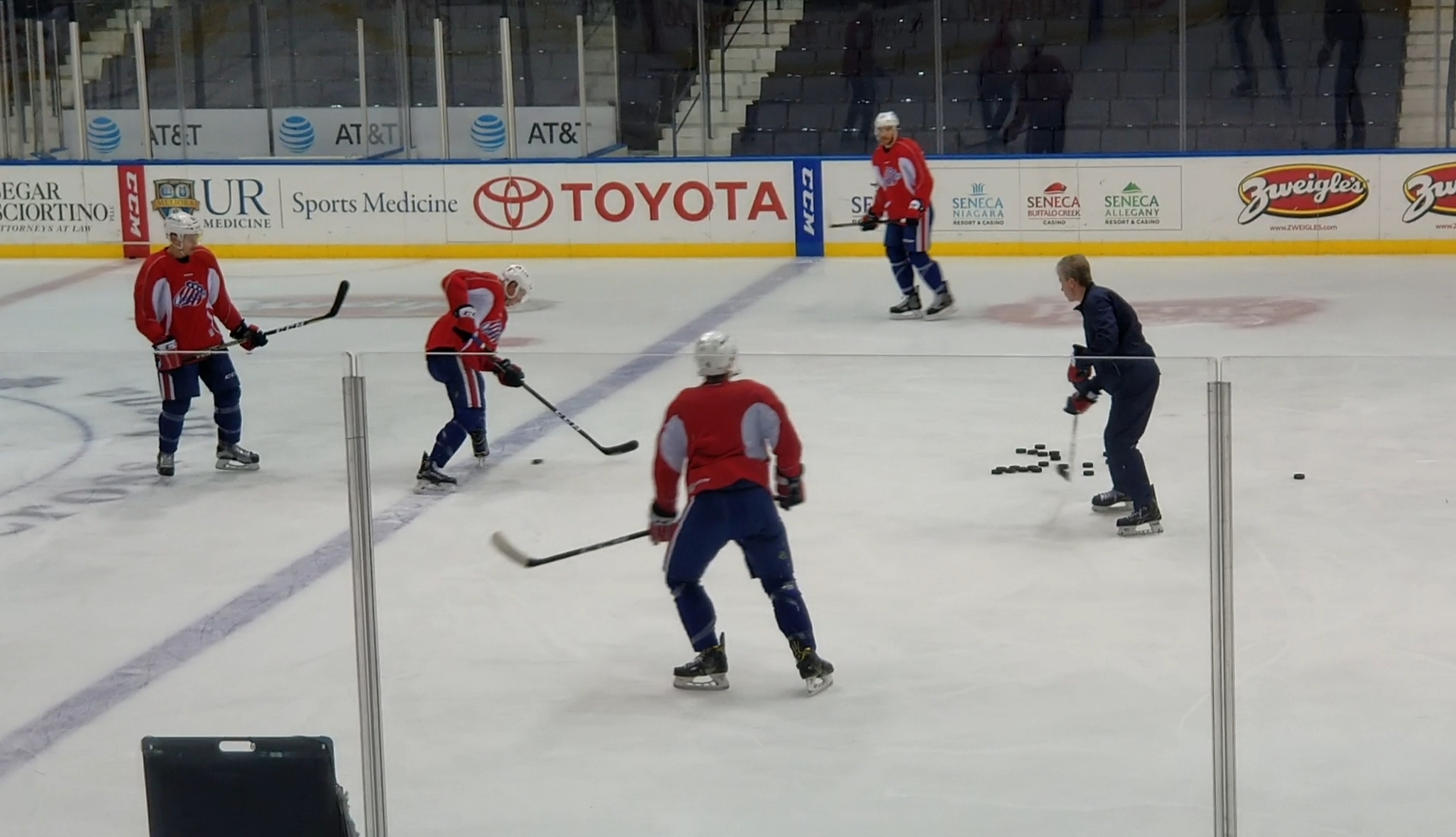 The Amerks are heading into their 29th game of the season tonight at home against the Belleville Senators. Now that he team is past the first third of the season they’veÂ gained confidence, put expectations on themselves and are having no problems staying motivated.

The Amerks and Senators have played twice this season in early November. The Amerks won the first game 4-2 and the Senators won the second game in overtime 5-4.

Belleville is 13 points behind Rochester in the standings but there’s one certain thing in The AHL, every team can be competitive.

Chris Taylor talked about the standings saying, “The standings don’t really matter where they’re at. We have to take every team like they’re the top team and come out and play the way we want to play.”

It’s repeated often by coaches and players that every game can be tough and it’s not an easy league. As confident as they are with themselves they go into every game knowing that it isn’t going to be easy.

Who is the starting goalie? That’s one of the first questions hockey fans (and reporters) have on game day. Linus Ullmark will get the start tonight for Rochester but even if it was Adam Wilcox it wouldn’t change the game at all.

Teams have been known to play different depending on who is in net whether you’re a professional hockey player or playing a youth game whether players admit it or not. Wilcox hinted at that with the last line. That isn’t the case here.

Ullmark and Wilcox were both drafted in the 6th round, only a year apart. Wilcox in 2011 by the Lightning, Ullmark in 2012 by the Sabres. Those are things we write about but don’t make a difference to the team on the ice. They’ve all bought into the idea of supporting each other and making each other better. That’s cliche to write about but actions speak for themselves and it’s seen at every practice and in every game with how everyone interacts.

Talking about the come from behind win in Utica this past Saturday night Chris Taylor said, “The guys wanted to win as much for him (Wilcox) as much as they wanted to win for themselves.”

“He’s a perfect guy,” Taylor said talking about the Ullmark/Wilcox duo. “They put internal pressure on each other. If one plays well, puts the pressure on the next guy to play well. We ask the same thing for our forwards and our defense. It’s the same as goaltending, we want them to put pressure one each other and make them accountable and make them better.”

It’s obvious that the season is going well when words are written about how well the goalies are getting along. That isn’t to say there’s been friction in years past between goalies but more about an inside look at the friendships of this current team.

With a third of the season already over the question becomes how do players stay motivated? How do you keep from falling into a slump and staying motivated?

Stuart Percy answered that saying, “It’s easier to come to work when it’s an upbeat environment. I think the holiday season helps brings that out on the ice as well.”

I also asked if we’re into the part of the season yet where it moves on from learning and on to higher goals. Percy answered saying,Â “We’re kind of into it now, we’re learning our structure well. We’re learning our teammates. I think when the calendar turns into January and late January it’s when our structure should be pretty solid and continuing to build on that. When you get into February and March that’s before playoff hockey so you have to be able to be organized to know the ins and outs of your teammates and what the coaches are trying to preach as well.”

Chris Taylor talked about keeping players motivated saying, “They’re motivation is that they should want to keep winning. To get even better every day as individuals and as a team and that’s what we’re trying to build off of. We don’t want to take any steps back.”

“It’s a little bit of a tribute to kind of our team and our culture we created here this season,” is what Hudson Fasching had to say about staying motivated. “It’s fun to be at the rink. That makes it easy to be able to come here and just hang out here with the guys whether we’re going through the same routine but we enjoy each others company. We all work hard and we all have fun which makes it easier for sure.”

Speaking of Hudson Fasching, with his return it’ll bump someone else out of the lineup. The depth is written about over and over. This team was built to be able to with stand any call ups and injuries and they already have. Depth also plays a role in forcing players to work hard, pressure each other and not expect anything.

“It’s not about competing against the other team, it’s internal competition. If you want ice team, you want to keep playing you have to play well,” is what Chris Taylor had to say about the lineup changes. “That’s pushing each other and helping each other but also making guys compete for their own jobs.”

Nathan Paetsch was in full practice this morning which is a great sign he’s even closer to a return. Justin Bailey (week to week) and Barry Goers (indefinite) are the other two injured players out.

As a first round draft pick Alexander Nylander is always a topic of conversation. When asked this week about how he’s been playing Taylor said,Â “He’s 19 years old, he’s feeling his way. It’s tough. It’s a tough league. If it was easy we wouldn’t be coaches and we wouldn’t have players down here.”

Taylor went on to say, “He’s doing a lot of good things and he’s improving every game. He’s getting back from injury. He’s been off for two months so there’s no question that he’s working hard to get back to where he wants to be and where we want him to be and continue to develop.”

A decision still hasn’t been made (or at least announced) about whether or not he’ll join Sweden at the World Junior Championships in Buffalo that start next week. The Sabres made a decision on December 20th last year but that was likely because the Amerks didn’t have any games after that. After tonight the team hits the road to play Friday and Saturday in Laval.

Had to chance to ask Percy about signing a contract and he said, “Just knowing I’ll get to spend the rest of the year here is great for me, I’ve really enjoyed my time so far here. I’ve done well on the ice and it’s been great off the ice as well.”

“I’ve been fortunate this year that the points have just kind of gone in I guess,” is what Percy said about being a leading scorer on the team. “When you’re passing to quality players it’s just a bonus.”

Chris Taylor talked about Percy saying, “We thought that his time was given up too quickly in Toronto. That’s why we grabbed him in Wilkes-Barre last year and why we grabbed him this year. We have the upmost respect him and his talent. He just needed to get confidence in his game and he got confidence in his game here and it’s great to see and well deserved for him to get a contract.”

When Percy was in the Toronto organization he also worked with assistant coach Gord Dineen bringing more familiarity to the situation here.

Buy One, Get One:Â The Amerks are offering buy one, get one tickets for every Wednedsday home game this season! Stop by the Amerks office, The Blue Cross Arena Box Office or call 1-855-GO-AMERKS to take advantage of the special offer!

Distillery Eats & Seats:Â This popular package returns for another year as fans can purchase a Best-Available ticket and $10 gift card to The Distillery for just $25.

Kids Tickets:Â New this year, the Amerks are offering a special Kids Ticket price of just $10 per seat for kids age 2-6 with the purchase of an adult ticket at the Box Office for all home games.