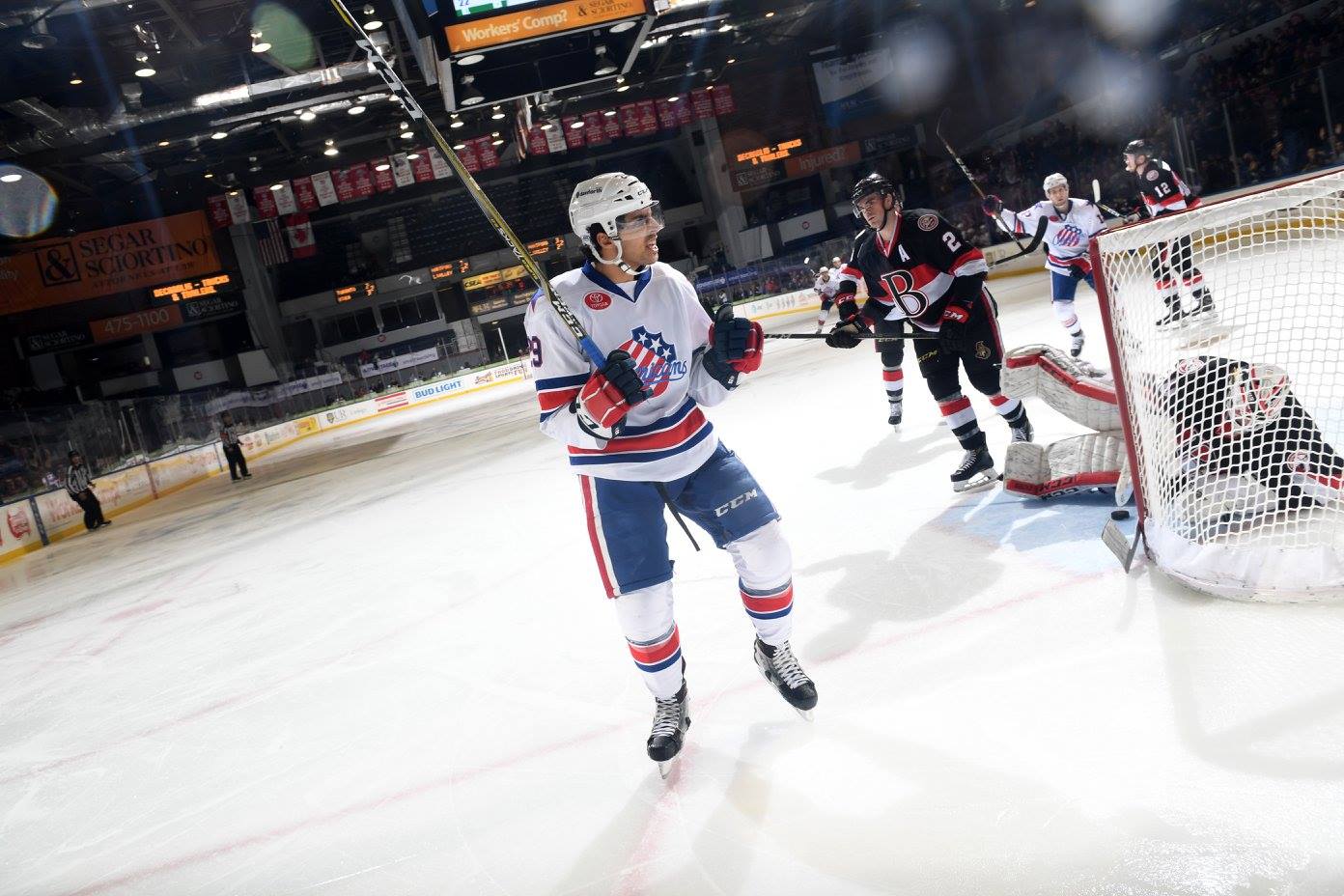 After two pretty boring periods of hockey the Amerks came out flying in the third period to score three goals and beat the Belleville Senators putting them within two points of first place. This team doesn’t quit.

Earning his league leading 13th win of the season Linus Ullmark said,Â “What I like is that we stuck with it all the way.”

Through two periods the Senators were leading 20-12 in shots. Linus Ullmark was keeping the Amerks in the game. On the other end of the ice the Amerks did have a few scoring chances that Danny Taylor robbed them of.

Talking about reliable goaltending Chris Taylor said this after the game, “It covers up a lot of mistakes but it doesn’t really cover it up on the video so we have a lot of video to show.” Taylor has also talked about how Ullmark is not only a leader on the ice but as well as in the locker room.

Zach Redmond gave praise to Ullmark as well saying, “He’s our best player almost every time he touches the ice.”

The third period was a new hockey game. Sahir Gill scored two goals within 62 seconds and the Amerk were in control from that point.

With just over seven minutes left in the game Zach Redmond scored his seventh of the season to make it a 3-0 game.

“For the most part that was not a good game,” Zach Redmond said afterwards. “We definitely need to clean up our game as a whole.”

The Senators were able to spoil the shutout for Ullmark by scoring a goal with 60 seconds left in the third period.

Chris Taylor talked about Redmond putting more points on the board saying, “He wants back in the NHL. Obviously he doesn’t want to stay down here. He wants to get back to the NHL and he’s trying it prove it to everybody that sent him down here.”

It wasn’t a pretty win. Before the third period it was a pretty boring game as well. Great teams don’t quit and find a way to make the adjustments they need to make and that’s what Rochester did in the second intermission. This team has high expectations on themselves now and they knew they weren’t playing the game they know they’re capable of.

They also know they aren’t a perfect team and take what they did wrong and learn from it. Chris Taylor said, “We know what we have to improve and we have to put in the hard work tomorrow morning at practice.”

Speaking of expectations, this team being lead by Taylor has a lot of them. It’s easy for fans and media to expect a lot out of their teams but now they’re starting to talk about it themselves.

Taylor talked about watching teams in different sports that do well and seeing what they do and how they do it and said, “We want everyone to watch our team. We want NHL teams to watch the Rochester Americans. We want all the AHL teams to watch us.”

After the game the Sabres announced that Alexander Nylander would be joining Sweden in the World Junior Championships.