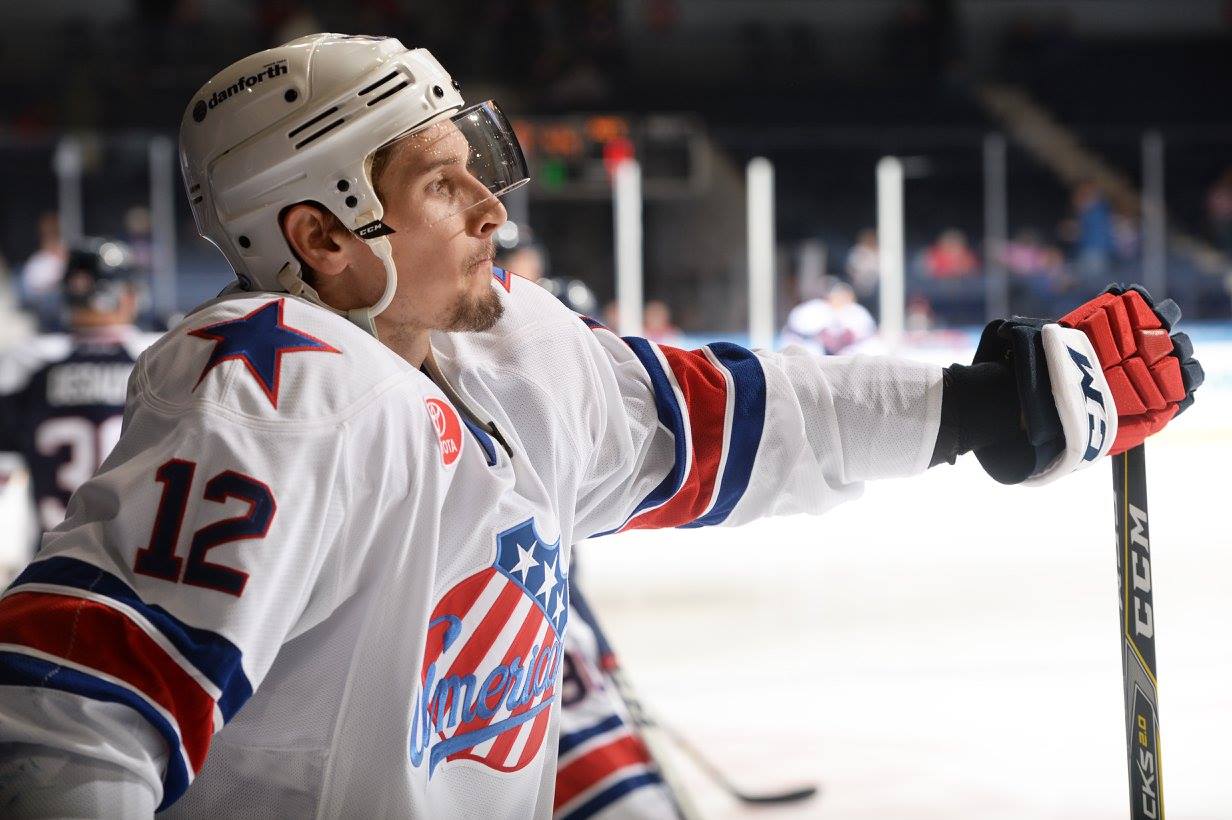 The Amerks announced on Friday evening December 22, 2017 just moments before the game was about to start in Laval that they had suspended Steve Moses indefinitely for “breach of contract.”

It has been confirmed that Steve Moses signed a two year contract with Helsingin Jokerit. This explains why the Amerks suspended him, he took off overseas.

(Story has been updated December 27, 2017 with more info and some quotes)

Moses has 7G+9A in 29 games for the Amerks this season. Prior to Friday night he was one of only four players to play in every game so far. The other three players to continue the streak are CJ Smith, Sahir Gill and Colin Blackwell.

Moses had played three seasons with Jokerit where he was one of the leading scorers in the league and a reason that Nashville had invited him to training camp for the 2015/2016 season.

The move apparently came as a big surprise to everyone. He was at practice last Thursday morning, had participated in hospital visits the days before, he was a part of the team. Until the bus departed for Laval and he wasn’t going on the trip. It was an unexpected turn of events. Was it because he was playing on the 4th line at times? He wasn’t going to get an upgraded contract and a shot with Buffalo? Wasn’t going to make Team USA Olympic team? Questions we still don’t have answers to. He was well liked by the team and always appeared to enjoy coming to the rink.

After practice on Wednesday morning (December 27) Kevin Porter talked about the situation saying, “We’re going to miss him but that’s what’s great about this team is we have a lot of depth, a lot of great players in that room and guys have stepped up and played really well. We try not to think about that stuff. We wish him the best but now worry about the guys in the locker room, guys that are here and we’re going to keep battling.”

When asked if he saw this coming at all Chris Taylor said, “I did not see anything coming and I still don’t really know too much about it, I just focus on the guys who walk into our dressing room each day and worry about those guys.”

“We’ll worry about the guys that are here right now,” Taylor added on. “Our depth has been awesome, we can put anybody in our lineup and fit in just well and we have all year.”

A player walking away didn’t phase Taylor because of the environment they’ve created. He said, “Internally we’re doing a good job putting pressure on each other. When Bailey gets back he’s going to have to push someone out of the lineup, that’s part of it, internal competition, that’s what we want and what we’re creating around here, its not just given you have to earn it.”

That leaves a potential for more ice time for guys like Eric Cornel, Adam Krause and Dalton Smith that have been trading places in and out of the lineup. There are no plans to find a player outside the organization to come in and replace the spot vacated by Moses.

Now some previous history on Moses…

He signed with the Nashville Predators ahead of the 2015/2016 season but was unable to make the NHL roster out of training camp so he was sent to theÂ Milwaukee Admirals. Moses missed one game for Milwaukee for a violation of team rules, he showed up late to a team meeting. He went on to play nine for games before he was released and he went back to the KHL withÂ St. Petersburg SKA to finish out the season and again in 2016/2017.

Moses signed with the Amerks in mid July 2017 looking for another chance in North America after seeing Nashville play for the Stanley Cup. Now he’s back overseas. Again.