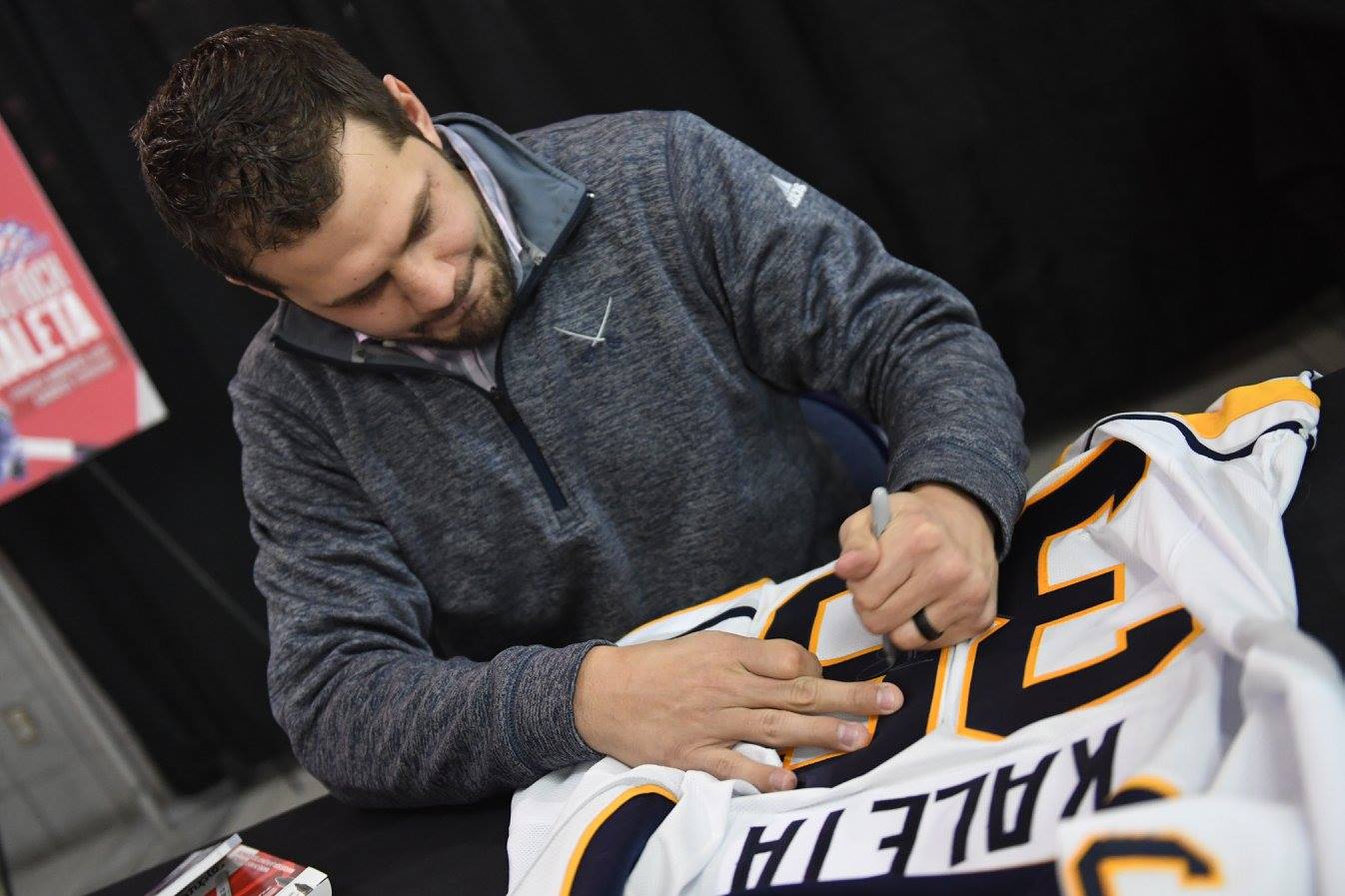 Patrick Kaleta played in 120 games over the course of four separate seasons with the Rochester Americans so why is he part of a Rochester Americans Legends Night? He gave everything he had every night, played with pride for the logo and continues to give back to the community.

Kaleta was a part of the Legends Night before the Rochester Americans game on December 30th and while many joked about not being able to find a better legend it’s clear that Kaleta has paved his way to the honor.

“I always take heavy pride into what I do,” Kaleta said before the game. “Whether its playing hockey or helping out the community. Iâ€™m not going to lie, I could have tried somewhere else especially at the end but Buffalo and Rochester are so close to my heart. Iâ€™m just happy to be a Sabre and an Amerk.”

When the Sabres didn’t extend an NHL contract to him for the 2015/2016 season he chose to sign a one year deal with the Amerks. He played in 26 games and was named theÂ Rochester Americans 2015/2016 Man of the Year in recognition of his contributions to the community and local charities. That would turn out to be his last season on the ice as a player but he quickly found a new role within the organization.

He was hired in November 2016 by the Buffalo Sabres as the teams youth hockey ambassador with a task of managing the Learn to Play program in the region. Learn to Play was established throughout the NHL to help kids ages 5 to 9 love the game of hockey. This is on top of hisÂ HITS Foundation (Helping Individuals to Smile) that he started in 2010.

Through his playing career and now to his off ice career he’s set the foundation to spend the rest of his life in Buffalo.

“You see a lot of athletes play for the Bills, Sabres, whatever and when theyâ€™re here they help out the community but then they go back home and forget about Buffalo a little bit and the cool part about me is that I will never forget about Buffalo and I intend on spending my whole life in Buffalo. One of the things you guys have seen through my career is that I enjoy getting out in the community and sharing my story. Getting in front of kids, inspiring them and basically living proof of being able to accomplish your dreams and I think itâ€™s a huge part of who I am and I intend on doing it until nobody wants to wheel me around anymore.”

He grew up in the Buffalo area with the dream of playing for the Buffalo Sabres and he accomplished that. 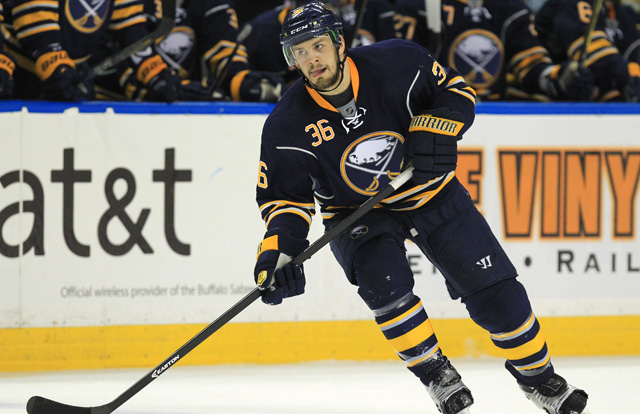 When asked about a memory from his playing career he said, “My first call up, my first game for the Sabres but overall everything Iâ€™ve ever done on the ice and off the ice. I gave you guys everything I had. If you guys would ever see my list of injuries and that sort of thing, I enjoyed being a teammate that would give up my body. I would be the person that did all the stuff that no one else would like to do and I had a lot of fun doing it. I loved to hit. The energetic style of play, the fighting once in a while.”

“I was always taught if I could look in the mirror at the end of the day and be happy with what I saw than I think I did a pretty good job.”

Patrick Kaleta’s first professional season of hockey with the Rochester Americans was only one of two teams over the last decade that has felt like it could make a real push in the playoffs. The Amerks finished the regular season with 98 points, good enough for 2nd place in the division. An Amerks team has finished that high since then. The team was lead by Clarke MacArthur, Michael Ryan, Mark Mancari, Drew Stafford and Craig Anderson in net. Yes, that Craig Anderson that has lead the Ottawa Senators since the 2010-2011 season.

It was the second of three seasons when the Amerks had a dual affiliation with the Buffalo Sabres and Florida Panthers. In the first round of the playoffs the Amerks faced a hot Carey Price with the Hamilton Bulldogs. The Amerks lost in six games with one of those games going into two overtimes. The Bulldogs went on to win the Calder Cup.

Kaleta agitated opponents the whole season (and throughout his career) playing hard hitting hockey (with some misses).

“We split with Florida half and half and I believe I sat my first 10 games so my pro career I was like I donâ€™t know whatâ€™s going on here and then as the year progressed I ended up getting called up and playing games with the Sabres. You get into the playoffs, I think your first year itâ€™s kind of like holy crap like Iâ€™m here playing pro hockey and for me being here in Rochester itâ€™s something that you look back on now and think thatâ€™s pretty sweet.”

“If you build a good organization the elite players in the NHL come through the AHL so itâ€™s pretty cool to look back and you see the players that you played against on AHL rosters, even NHL rosters. People nowadays are like you played against Mike Modano? Iâ€™m like yea I did, I’m telling you it’s just a cool experience overall.”

When asked if he’s seen the changes going on in Rochester he said, “I still have a little trouble sitting down and watching a full game. I still have the emotion, the fire of playing but I think one of the big success points is for Rochester is that they have experience and what that experience allows the young guys to work on their game. To develop at the right speed rather than pushing them into situations that theyâ€™re not ready for. So with that experience you get development from the younger guys and all of a sudden your team becomes an elite team in the AHL and I believe that Rochester is seeing it.”

Kaleta sacrificed himself on the ice, continues to give back to the community and is also mentoring those that have the same dream that he had as a hockey player.

The Buffalo Sabres draftedÂ Austin Osmanski in the 7th round of the 2016 NHL Draft, someone with a similar path as Kaleta. Osmanski has also said that Kaleta was one of his favorite players for the Sabres.

Kaleta talked about that saying, “It was really cool because he’s from Buffalo, is playing in the OHL and got drafted by the Sabres. We work out in the summer time so I think he was a little nervous but I think once we got to know each other we hugged it out and he was all good. Another cool part is that he was traded to Peterborough Petes, which I played for in the OHL. It’s kind of weird how it’s working out with Peterborough, being drafted by the Sabres and being from Buffalo. I look at a person like that and say hey I’ve been in the same position you were at that age and I’m going to do everything I can help.”

Another position for Kaleta is an assistant coach on the 16U Junior Buffalo Sabres team. I asked him what he says to players and he said, “We have a jacket, has the Sabres logo right over the heart so the main message I give to those guys is you play for the logo and you play with your heart. I think if you do both of those things and you can do no wrong.”

Talking about giving back now that he’s finished playing he said,Â “I did a lot when I played too just a matter of having more time to do more things now. If I could go to a hospital visit, if I could see a young hockey player in learn to play and wherever and I can make their day, make a positive experience in their life and I feel obligated to do that.”

“I’m a normal person like everyone else, I had a dream to play for the Sabres and I did that. I want to be the person that makes that available to any person especially surrounding the Buffalo and Rochester area.”