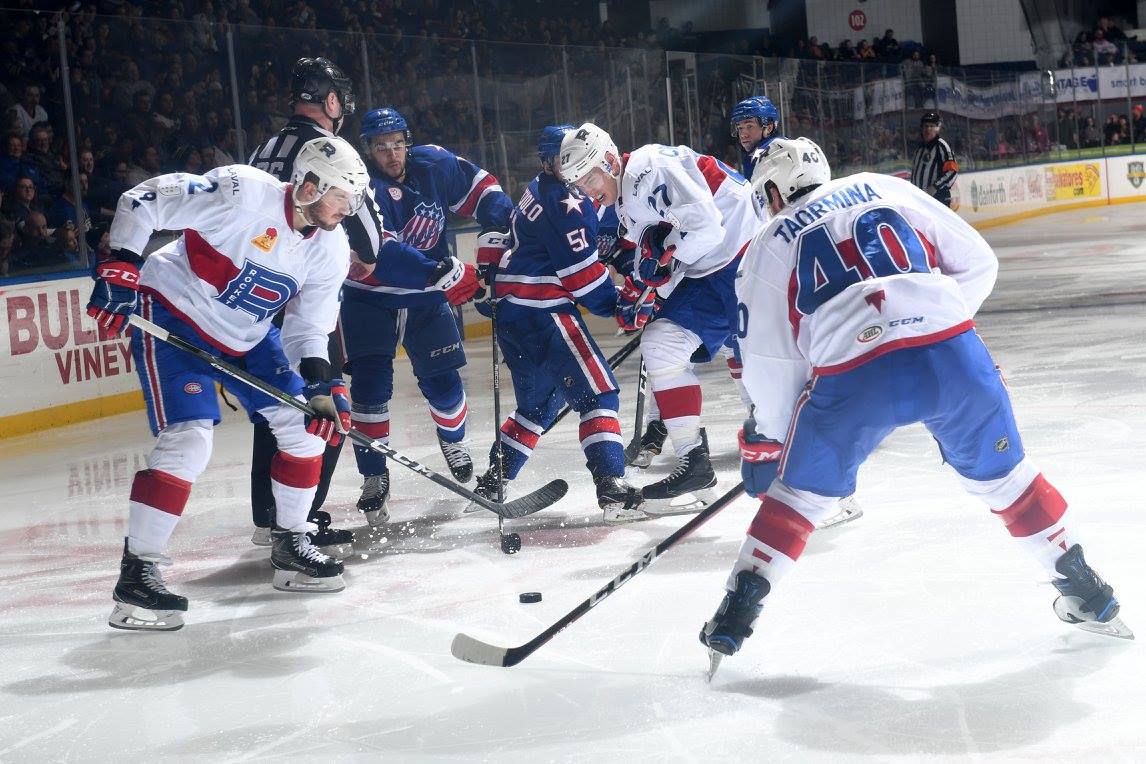 Rochester joined the ranks of rough days for first place teams on Saturday losing 4-2 vs Laval Rocket. Manitoba and Providence also lost. The fourth team, Stockton Heat was fortunate to have the day off.

The good news is that the Amerks are still in first place. The bad news is that they aren’t doing too well at home. The team now has an 8-7-0-1 record at home vs 12-1-3-2 on the road.Â They are 9-3-0-1 in their last 13 games and defeated the team that was in first place to move into first. Those nine wins have also had nine different game winning goal scorers. Unfortunately those three regulation losses have all been at home.Â The record at home was a focus of post game interviews.

Zach Redmond talked about it saying, “I think we’re aware of it and that’s the important thing. Still a ton of season to figure that part out. You want to win in front of your fans and I guess we’ll just have to put an extra emphasis on that.”

Stuart Percy said, “I’m not sure. I know we’re 8-7-1 now at home. We have to be better here. We keep it simple, we play to our strengths on the road and we just have to bring that mentality home. We took two games there right before Christmas. We know they were motivated. We have to play a full 60 minutes when it comes to playing on the road or at home.”

CJ Smith said, “We’re doing so well on the road we want to show the fans we are a first place team and are capable of winning games and we haven’t been able to close games out lately. Winning at home is just as important as winning on the road so I think we really have to bear down and get out to a better start.”

Speaking of CJ Smith, he’s been on a rookie slump. After shooting to the top of scoring leaders in the league he’s been without a point in the last six games. He’s still only one point behind the league leading rookie and tied for 10th overall in the league but his previous drought was only two games which were the third and fourth games of the season.

Asked about it after the game he said, “Slumps happen, it is what it is. Just have to work through it. Can’t get frustrated. All the best players in the world go through slumps so I think just sticking with it, stay positive and keep doing what I was doing earlier and not trying to change my game, not trying to force anything.”

“We have to stick with him and that’s the biggest point in giving him his confidence,” Chris Taylor said talking about CJ Smith. “He’s had a lot of good chances, he had four shots on net tonight. I thought he played ok like everybody but he just didn’t have that extra kick, extra jump. He’s usually first in the fore check and he’s slippery. He looked a little tired tonight and they didn’t. Again they’re a heavy team, they have big forwards, big defense and we’re not as big as them. We have to try and give a little extra and that takes a lot out of us.”

This is why players will stay in Rochester longer in the Jason Botterill era. It’s learning to score like he was but now learning how to get out of a slump, two things that are easier at this level than they are in the NHL.

It feels strange writing about slumps while the team is in first place. The expectations are high though, can’t sit back at this point.

Laval scored first at 10:24 of the first period when Chris Terry had the puck in the corner, spotted Adam Cracknell skating into the slot on his own, quick pass and it was past Wilcox.

At 10:40 of the second Jordan Boucher found the rebound off the initial save by Wilcox and buried it in an empty net.

“They have some skilled players and they find a way to get behind us and take advantage of just little mistakes we’ve been making, we just need to be a little cleaner,” was a comment by Zach Redmond after the game. Both goals were Rocket forwards finding their way to the net off of Amerks mistakes.

Seth Griffith had some patience on the far side, sent a saucer pass to Redmond on the opposite side, quick shot and it was a 2-1 game with 3:03 left in the second period.

The game started getting a little feisty in the third period which was bound to happen with this being the fourth game between these two teams in eight days.

Taylor talked about that saying, “I think it was just frustration on our part. Guys tried really hard tonight and I respect that. Our guys in our dressing room give everything they got every night. We just didn’t have it. Couldn’t connect on plays, attention to details, turnovers. We tried a little too hard, too much and we just didn’t have it tonight.”

“With the way that the league is setup when you’re playing teams 8 to 12 times especially so close together you’re going to start to get a little bad blood tonight between individuals,” is what Redmond had to say about it.

“We just went through our whole team just now and everybody we just said was alright, no one like stood out and no one was like really bad,” Taylor said after the game. “It was one of those games that was kind of blah and we didn’t get anything going.”

Chris Terry and Adam Cracknell were lethal for the Rocket. Terry had 1G+2A and Cracknell had 2G+1A on the same line together. Terry scored with 5:05 left in the third to go up 3-1.

Wilcox left the net for an extra attacker with 3:28 left in the game but it wasn’t meant to be. Laval scored an empty net goal with 2:40 left on the clock. This was the first time the Amerks had been down by more than two goals since a November 18th loss in Binghamton.

A penalty shot was awarded to CJ Smith with 1:23 left in regulation but he was stopped by Lindgren.

With 16 seconds left on the clock Sahir Gill scored off a pass from Brendan Guhle who was behind the net and the final score was 4-2.

Rochester had 38 shots on net but similar to the last time these two teams played a majority of them were just initial shots. CJ Smith talked about that saying, “Even though we got quite a few shots, we just have need to make it harder on their goalie. Take his eyes and get those second opportunities.”

Rochester has two days off to change the calendar before getting back to work on Tuesday morning.