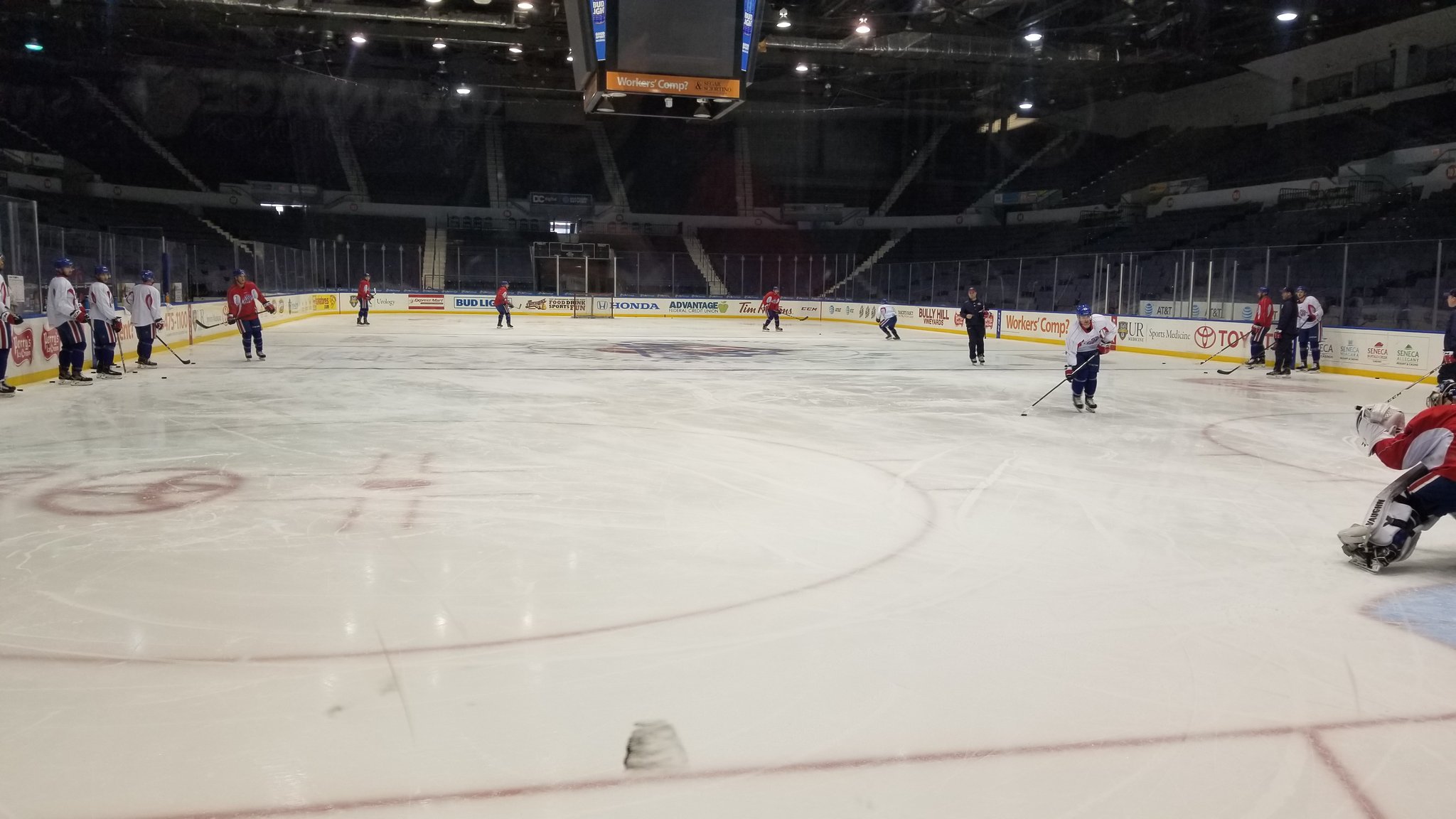 The second place Amerks start the new year with back to back home games with the intent of turning their home record around. They play Friday night vs Bridgeport Sound Tigers and Saturday vs Lehigh Valley Phantoms.

This will be the second meeting between the Amerks and Sound Tigers, the first was December 10 in Bridgeport when the Amerks finished a three game weekend winning 4-1.

“We played a very simple game and that’s why we won,” is what Chris Taylor said this morning about that game. “Capitalized on their turnovers and have to do the same tonight.”

Playing on home ice hasn’t produced the best results for the Amerks this season and they’re aware of it. The finished the month of December with a 2-3-0-1 record compared to being 7-0-0-1 on the road.

Chris Taylor talked about last weekend when the team lost 2 of 3 saying, “The process is just how we respond the next day. We had a long week, was a tough week.”

“We did a lot of video, a lot of hard practicing so we know whats at stake this weekend especially especially with two weekends at home.”

Keeping it simple CJ Smith said, “We just have to get out to a good start.”

CJ Smith has been in a slump of sorts going six games without a point. Between that, still being a leading rookie scorer making the AHL All-Star team he said he isn’t feeling any pressure saying, “I’ve always had pretty high expectations of myself, trying to challenge myself so I don’t think there’s too much pressure building.”

While talking about recent slumps and the home record it’s also worth noting that the Amerks have earned points in 21 of the last 25 games and the team has 38 points going back to November 1st.

The last nine games were all against division teams including four of the last five against Laval. Every player knows that’s how the scheduling works out in the AHL so when a different opponent you don’t normally play comes along it’s a positive.

“We weren’t happy with our last few games so a little bit of a restart for us,” Hudson Fasching said.

On what they need to do Fasching said, “For us it’s more about creating scoring chances. I think we did create a lot but we didn’t capitalize. We need to move for with those scoring chances, get a greasy goal, something that isn’t necessarily a tic tac toe play.”

“We haven’t gotten the results that we wanted to at home so far so we have to make sure we have a good weekend, we know that.”

Taylor Fedun was sent back to Rochester from the Sabres this morning and will be playing. Conor Allen and Nathan Paetsch will be the healthy scratches on defense.

Bailey is back to skating with the team.

MacWilliam blocked a shot off of his wrist last weekend against Toronto.

If you don’t have tickets for the game yet you can get $17 best available seats thanks to the Buffalo Bills breaking their 17 year playoff drought. Click the link in the tweet below:

Congrats to the @buffalobills on making the playoffs!

We are offering $17 best available tickets for Fridayâ€™s game (Jan.5th) vs. the #SoundTigers to all #GoBills and #Amerks fans!
Tickets>> https://t.co/8wxR996x0A pic.twitter.com/8WRIC4DMCG

One last tip, the line to park in the Civic Center garage will likely be longer than usual with the cold. Arrive early to get right into the arena!

Other promotions for tonight:

Zweigleâ€™s Family Four Packs: Zweigle’s Family Packs are available for every Amerks Friday and Sunday home game during the 2017-18 Season. For just $79, fans will receive four Lower Level tickets (some restrictions may apply), four hot dogs and four sodas. A minimum of four tickets is required in order to purchase the Zweigleâ€™s Family Pack.