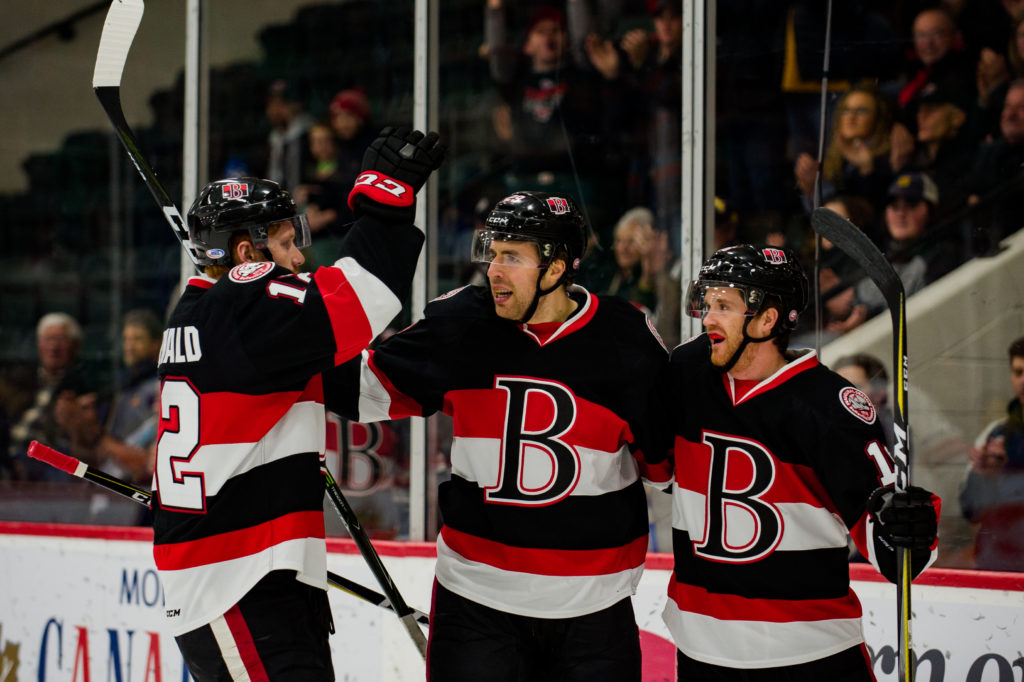 The Amerks were less than 15 seconds away from winning in regulation but a late goal allowed the Senators to tie it up and eventually win in overtime. A bright spot is that Rochester continues to lead the league with their road record and is still the only team halfway through the season to only lose one game in regulation.

(Featured photo from the Belleville Senators)

Adam Wilcox was named the third star of the game and was a difference maker for the Amerks with 33 saves. The team considers him a second goalie on the team, not just the backup to Linus Ullmark and played an excellent game. The Amerks were able to score two goals and have a lead right until the near end but the scoring chances were few throughout the game compared to those by Belleville.

Belleville outplayed the Amerks in the first period and showed that by scoring at 6:40 when Ethan Werek was able to sneak behind everyone, deke Wilcox out of position and buried the puck.

They also out shot the Amerks by 16-6 in the first period with only one of those Amerks shots coming close to being a scoring chance off of a tip.

As the second period began Belleville was still in control of the game but as it went on Rochester began to lead the action.

Taylod Fedun scored late in the second with 85 seconds left in the period off a two on one rush with Colin Blackwell. Give Hudson Fasching credit for the quick pass on the breakout to start the play down the ice.

Rochester turned things around in the second and had a 10-9 advantage in shots.

Into the third period the Amerks penalty kill continued it’s dominance and killed off it’s 43rd straight penalty when Colin Blackwell was sent to the box for a delay of game call.

Nearly halfway through the third period Hudson Fasching gave the Amerks their only lead of the game by redirecting a shot from the top of the face off circle by Colin Blackwell.

Rochester began to control the play of the game, was limiting the chances on the ice for Belleville but it wasn’t enough. The game was looking like a win until 14.7 seconds left with an extra attacker on the ice Max Reinhart scored to tie the game 2-2.

Heading into overtime the penalty killing streak that spanned a total of 13 games would come to an end. Zach Redmond was called for slashing as a Senators player rushed towards the net. With a 4 on 3 advantage the Senators stretched the Amerks across the ice and Jordan Murray scored the game winner.

Throughout the whole game the Amerks number one star was Adam Wilcox. He was able to make the saves needed throughout the game to keep the team in the game but unfortunately it wasn’t enough to get him the win.

Matt Tennyson left the game about six minutes into the third period with an apparent knee injury. He didn’t return to the game. This was the play it happened on:

Colin Blackwell was added to the injury report as upper body and listed as week to week. He left the game with 1:14 left in the third period after what looked like a normal shift, no big hits or anything. After a puck was deflected over the glass he had gone down to the ice and was slow getting up and didn’t return.

Absent from the game was Alexander Nylander. He hasn’t played since being returned to the Amerks roster at the end of the World Juniors tournament. We’ll know more on Friday morning about his status.

Before the power play goal against was scored in overtime the Amerks had killed off 43 straight penalties dating back to December 10th. The team is currently ranked 4th in the league for the penalty kill at 87.3% and with the top three teams leading by less than 1%. Toronto Marlies leads the league on the penalty kill at 88.2% followed by Manitoba Moose 87.9% and Iowa Wild at 87.7%.

Nathan Paetsch (cleared from the injury report) and Justin Bailey (considered day to day) did go on the road trip with the team. Whether that was in case they were needed or because there were extra seats on the bus is unknown but they did go with the team. As of the end of last week it was expected that Paetsch was about a week away and Bailey was 7 to 10 days. With the injury to Tennyson it sounds like Paetsch will likely play this weekend.

Some recent slumps on the team:

CJ Smith only has one point (a goal on January 6) in the last nine games.

Kyle Criscuolo only one point (an assist on CJ Smith’s goal on January 6) in his last seven games.

Sean Malone appeared to break his early slump with 2G+1A in a five games but since then has gone 16 games without a point.

Eric Cornel has gone 12 games without a point after some early season shootout heroics.

The Amerks are back at home on Friday night when they host the Binghamton Devils.