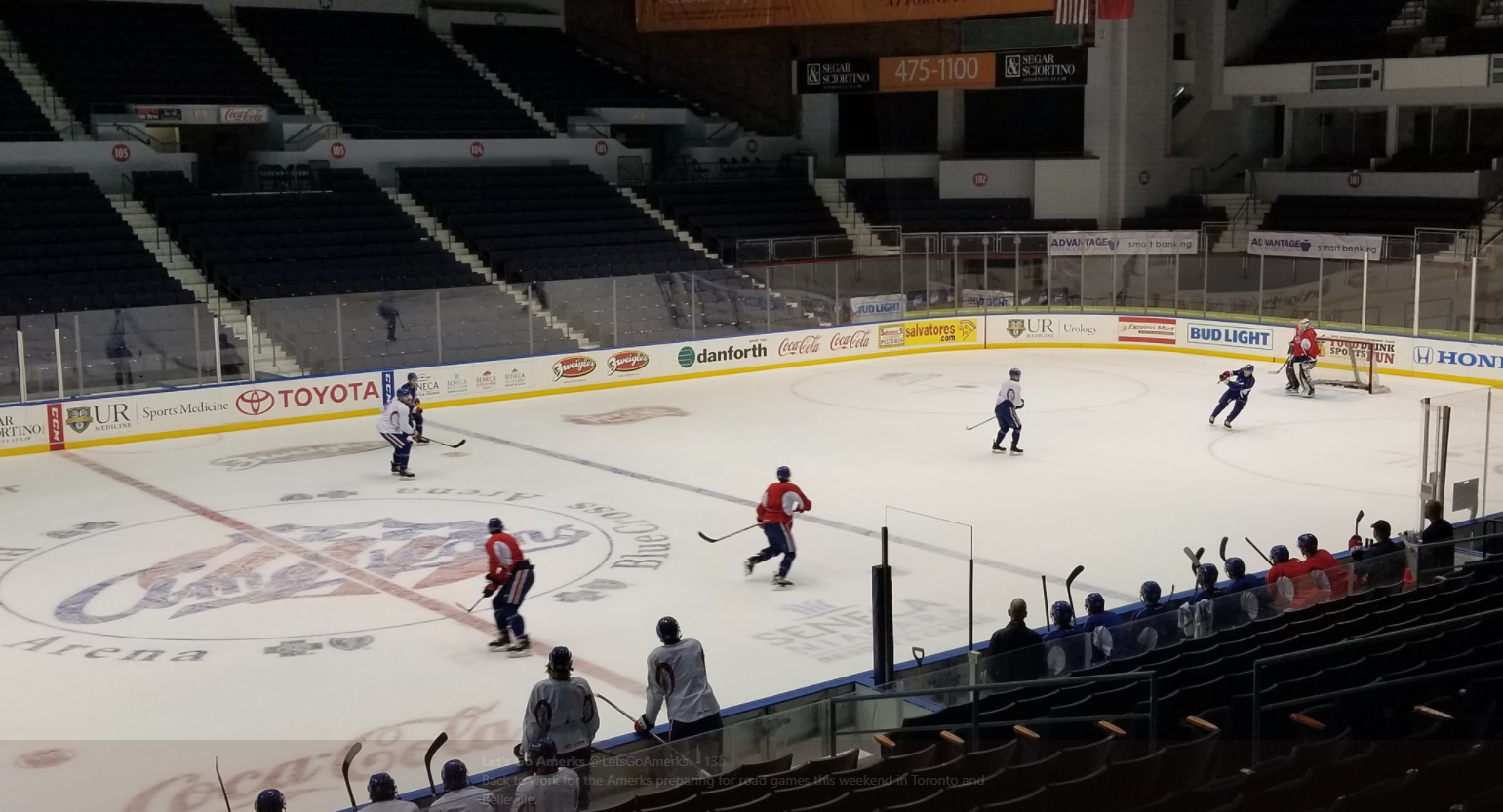 After a great weekend in Charlotte the Amerks returned home to practice for road games ahead vs Toronto and Belleville before the All-Star break. They had won 4-1 and then were down 4-1 and scored three goals before losing in overtime.

Seth Griffith talked about the win on Saturday saying, “We came out hot. We had two big goals from Cornel and Malone so for them to get us out to a 2-0 lead in the first ten minutes of the game was huge and it was smooth sailing there on out. We didn’t give them a whole lot and we had a lot of chances. I felt like with the opportunities we had we could’ve got a few more than four.”

Linus Ullmark is always great for his positive attitude, outlook on life and moving forward. He’s also looking towards spring hockey for the first time in North America.

He’s played in 30 games for the Amerks this season and is tied for second in the AHL with 17 wins. He’ll also be headed to the AHL All-Star Game in Utica this coming weekend.

With those stats he’s still asked about his one game with the Sabres and gives a simple reply, “A game is a game and a win is a win so it’s always nice to have that in the back seat but I’m just trying to prepare for the next practice and next game.”

As the wins start adding up he still knows how important it is to have unwind and keep life balanced.

“I think it’s important for everybody doesn’t matter what you do, if you’re a pro hockey player or if you work in a bakery or something like that. You have to have a safe zone or whatever when you can come home and relax and do whatever you want to do. For me, there’s 76 games in a season and then there’s post season so there’s a lot of hockey games. If you only focus about hockey it’s going to bring you down quite fast. For me I like to go back to my wife, relax, whatever is in store for that day and come back tomorrow.”

Mr and Mrs Ullmark have March 20th circled on their calendar as the due date for their first child. Talking about that Linus had the new dad smile on his face with the excitement of what’s to come and he also joked about how he’ll need to be well rested.

He’s played in the NHL, he’s an AHL All-Star, he’s leading the Amerks so what else does he have to accomplish? A playoff run.

“You play for the cup, you play for nothing else. You don’t play for 76 games in the regular season and then go home. You can’t be satisfied with that. Playing on the senior level like this, I haven’t been able to go on a long run yet. I really want to go there, I just want to have the first taste of playoff hockey in North America and I think it’s going to be awesome. It’s completely different playing a playoff hockey game than regular season hockey game.”

CJ Smith went through his first slump as a pro at the end of December going seven games without a point. In the last eight games he’s had 4G+3A.

He talked about it saying, “I had that dip but fought my way back through it and got back to my game and have been better over the last three or four games.”

“My time and space got taken away even more and it was something I had to learn to fight through. I was just trying to be consistent with everything I was doing and I found a way to battle through it.”

When asked if he prefers goals or assists he smiled and said, “They both feel pretty good either way. I like being on the ice for a goal and I like helping the team win so whatever I can do to help the team win brings a good feeling.”

Defenseman Matt Tennyson was called up to the Sabres due to an injury to Nathan Beaulieu on Monday night. Beaulieu was hit early in the game on Monday and left with an apparent concussion and has since been placed on injured reserve.

Brendan Guhle was missing from Amerks practice on Tuesday morning. No update on his absence. He had left practice early last Tuesday and missed a game on Sunday in Charlotte.

With two defenseman out of the lineup the Amerks have called up Arvin Atwal from the Cincinnati Cyclones.