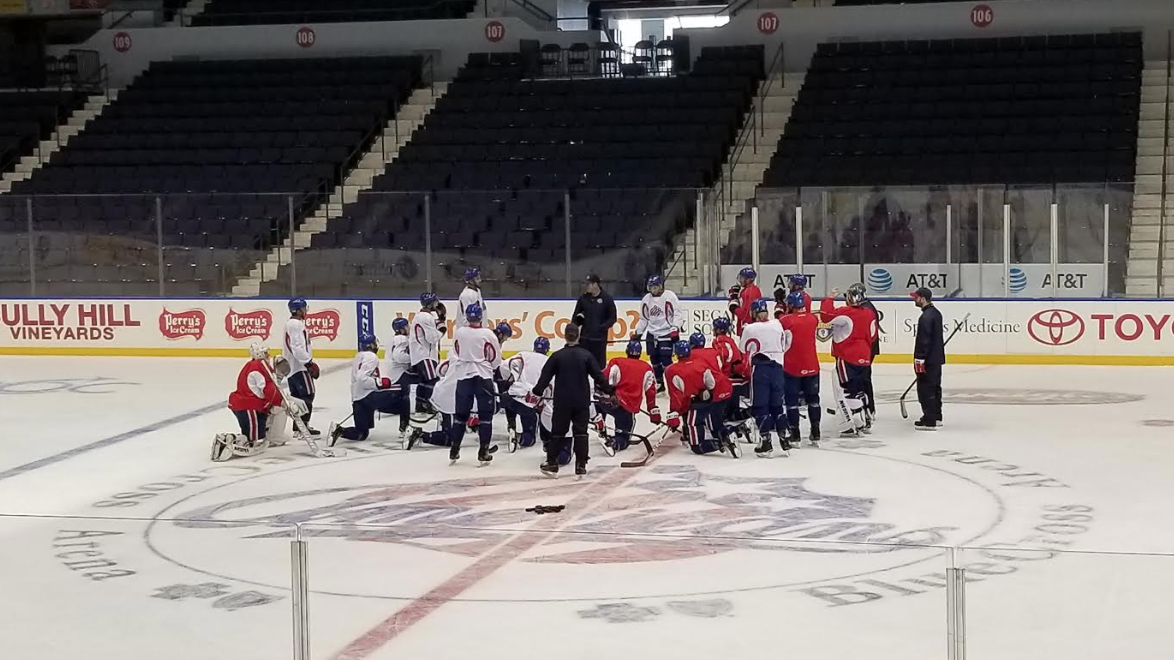 The long stretch away from home ice advantage is finally over and the Amerks are back in Rochester to play against the first place Toronto Marlies for Hometown Heroes night.

So far this season the Marlies are 2-1 against the Amerks.

The games are close. The game last week was 1-0 until the Marlies scored an empty goal with 30 seconds left.

“It’s a big two points especially here at home. We always talk having a good start so we really need to focus on that,” CJ Smith said after practice.

Chris Taylor said this game is a big deal. “We’ve been chasing Toronto all year and they’re one of our biggest rivals right now and second for me is the first responders. What they do is tremendous for the community. Third is obviously Brian getting ready for the Olympics.”

“We didn’t do a very good job in the neutral zone the last game in Toronto. We allowed them to come up with speed. They had a lot of shots from the outside,” Chris Taylor said talking about the Marlies. “For us, we have to liit their speed coming up and we didn’t do a very good job of that the last game. We did out chance them. We have to get the second, third opportunities. We had some first good opportunities.”

Unless you’ve been unplugged from the internet for the last week you’ll know the big story line tonight is Brian Gionta suiting up for the Amerks for the first time in his professional career. He’s using this as a one game tune up before heading to the Olympics in South Korea.

“They have a great team, obviously being in first place and us chasing them it’s a big game,” Brian Gionta said talking about the Marlies. “Head to head those points are huge.”

As he was talking it was natural for him to say “us chasing them.” Tonight will be his first game but he’s a part of this team as much as anyone else the locker room.

I asked him about saying “us” and he replied with, “The guys have been great, they’ve accepted me as part of the group and this is just one more step along the way and it’s fun to be part of it with them. They’ve been great with the process. I’ll go out there and battle with the guys tonight.”

Based on practices we can expect to see Gionta skating on a line along with Kevin Porter and Sahir Gill.

“It’s weird seeing his name up on the board on the lineup today but it’ll be pretty exciting,” CJ Smith said talking about Gionta. “He brings leadership, positive attitude and experience. He brings honestly, the guy is well rounded.”

Devante Stephens and Arvin Atwal were called up from Cincinnati this week and will be in the lineup paired up together. Nathan Paetsch and Conor Allen appear to be the scratches on defense. Looks like Dalton Smith will be the forward sitting out tonight.

Linus Ullmark wasn’t on the ice for the gameday skate but was in the building. Taylor said with a smile when I tried to ask about Ullmark, “We’ll have to wait and see, I don’t want them to know.”

Could be Wilcox, could be Ullmark. We’ll have to wait until shortly after 6:30pm tonight to find out. Either way, this team plays with confidence in front of both goalies.

In case you missed it, Linus Ullmark and CJ Smith had great performances at the 2018 AHL All-Star game helping lead the North Division to the win. CJ Smith skated away with the 2018 MVP honors with 3G+2A in the round robin three on three tournament.

Ullmark, Smith hope to be on cusp of joining Sabres – [ Read more on NHL.com ]

A crowd Â pushing 10,000 is expected tonight so if you’re coming to the game buy tickets ahead of time to avoid long walk up lines. On busy nights there’s often a long line of cars to get into the Civic Center garage as well so if that’s your parking preference plan ahead!