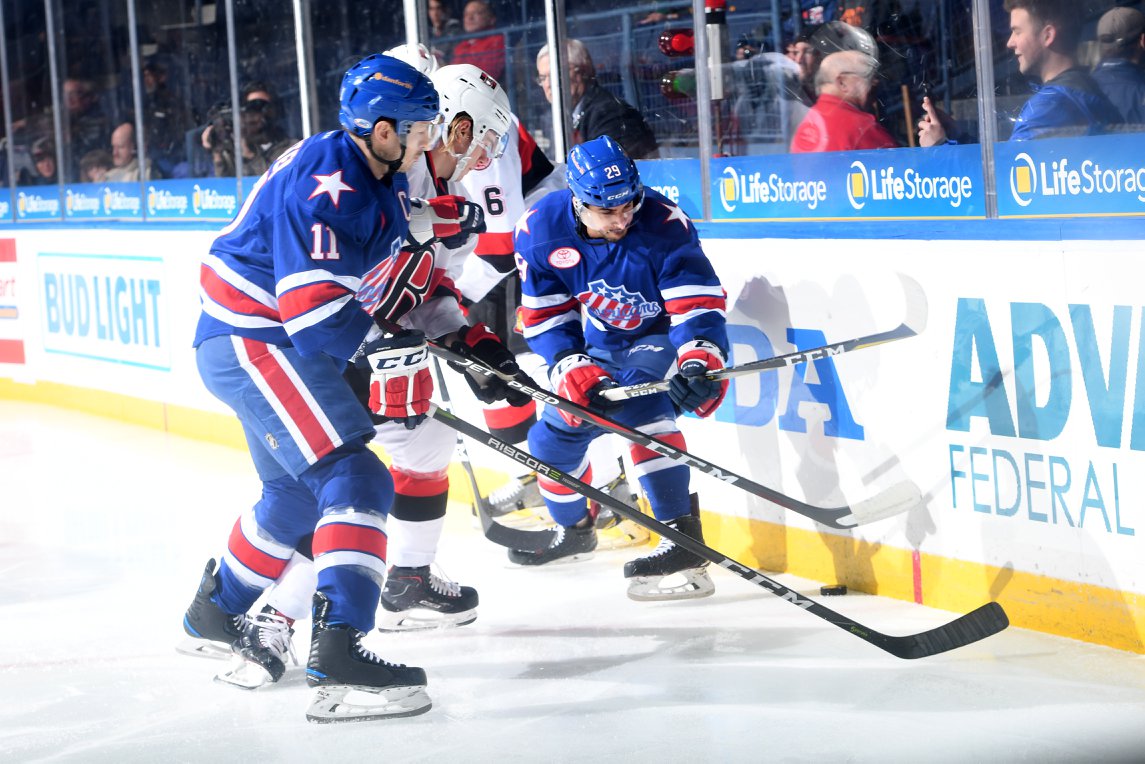 The article here earlier in the day was that the Amerks were looking to start winning games. That didn’t happen on Wednesday night. The Belleville Senators controlled the game from start to finish and won their first game by a shutout of the season.

Over the last 10 games the Amerks only have two wins, it’s a nose dive from the top. It’s easy to look at the standings and see them still near the top but that isn’t going to last much longer at this pace. They’ve gone from being a fun team that was finding ways to score goals and win games to a team that’s barely treading above water. The good news is that they have time to turn it around but that window won’t last forever.

“It was a terrible game. Right from the start, right to the finish,” Chris Taylor said after the game. “We didn’t win a battle. I didn’t like anything about our game. Actually, I liked Wilcox. I thought he played well for us.”

“I think we came out a little bit sloppy in the first period,” Taylor Fedun said after the game. “Overall our compete could have been a little better and it got us behind the eight ball there.”

Belleville controlled the pace of play in the first period including a span of over three straight minutes in the Rochester zone. Kyle Flannigan set himself up for his first goal of the season winning a battle along the boards. Flannigan poked the puck behind along the boards, rushed to the net and was able to chip in a pass from Tyler Randell.

Kyle Flanagan scored the game winner at 7:06 of the first period. pic.twitter.com/xwjgbxotlr

A breakdown in the defensive zone was costly. Something that has been a common occurrence in this stretch of games.

“I don’t ask for a lot, you don’t have to go running a guy through the wall,” Taylor said. “Hands, bumping guys, get them off the puck, get good body position and win your battle. Win your battle. We didn’t compete tonight.”

The battle was first lost along the side boards, then the back wall and then the front of the net. In that whole sequence the only Amerks player around was Arvin Atwal. He could have used a little bit of help in there.

The Amerks had a 8-7 advantage in shots with two of those really standing out as scoring chances, both attributed to Sean Malone. He took one shot from the face off circle and the rebound came out the opposite side but Alexander Nylander wasn’t in the zone quick enough to get a stick on it. Another was a drop pass from Hudson Fasching to Malone in the slot but Marcus Hogberg had the save.

Hogberg had it easy with 33 saves and his first shutout of the season.

There was a time when the Amerks were scoring by screening goalies, taking their eyes away, getting the second and third chances. On Wednesday night all of the shots on Hogberg were from places that he could see them. Routine saves for every goalie in the American League.

A scary moment with 4:30 left in the second period when Nick Baptiste hit Willie Corrin into the boards and he went in head first. The stretcher came out onto the ice and took him off. No word on his status but will provide an update when something is heard. After the game Baptiste said the hit wasn’t seen as vicious, just a little push and he went into the boards awkwardly.

The hit that had Willie Corrin leave the ice on a stretcher. Haven’t heard any updates yet on his status. pic.twitter.com/mUGSKI2NRE

Moments after coming out of the penalty box for that hit Baptiste had a breakway, was slashed and given a penalty shot. He took the puck in slow but doinked it off the far post.

“Sometimes those guy in, sometimes they don’t,” Baptiste said. “I score there and maybe the outcomes different but we have to be better. We weren’t good enough tonight.”

Baptiste’s penalty shot attempt that went off the post. pic.twitter.com/l0tcoHkOHH

They started out the third period looking like they had more step to their game and finished the period with 17 shots on goal but again, all in front of the Senators goalie.

When asked what’s been going on lately Baptiste said, “A lot of it’s internal. We just have to be better for 60 minutes, we have to work harder. We’ve also gotten a little comfortable in the sense that we’re probably going to be a playoff team if we can keep it afloat. We’re not playing like we need to get into first like at the start of the year. I think we need to get back to playing as a championship caliber team.”

Max Reinhart scored an empty net goal with 45 seconds left and that was the game.

“We’re falling all over the place, we just weren’t with it,” Chris Taylor.

When asked if it’s a mid season slump Taylor Fedun said, “I don’t know if we’re going to be looking for excuses but I think We have to find a way to get back to working hard and working together and that’s what we were doing when we were having success.”

Fedun showed frustration after the empty net goal smashing his stick over the cross bar.

The team will be back to practice on Thursday to work on getting out of this nose dive.