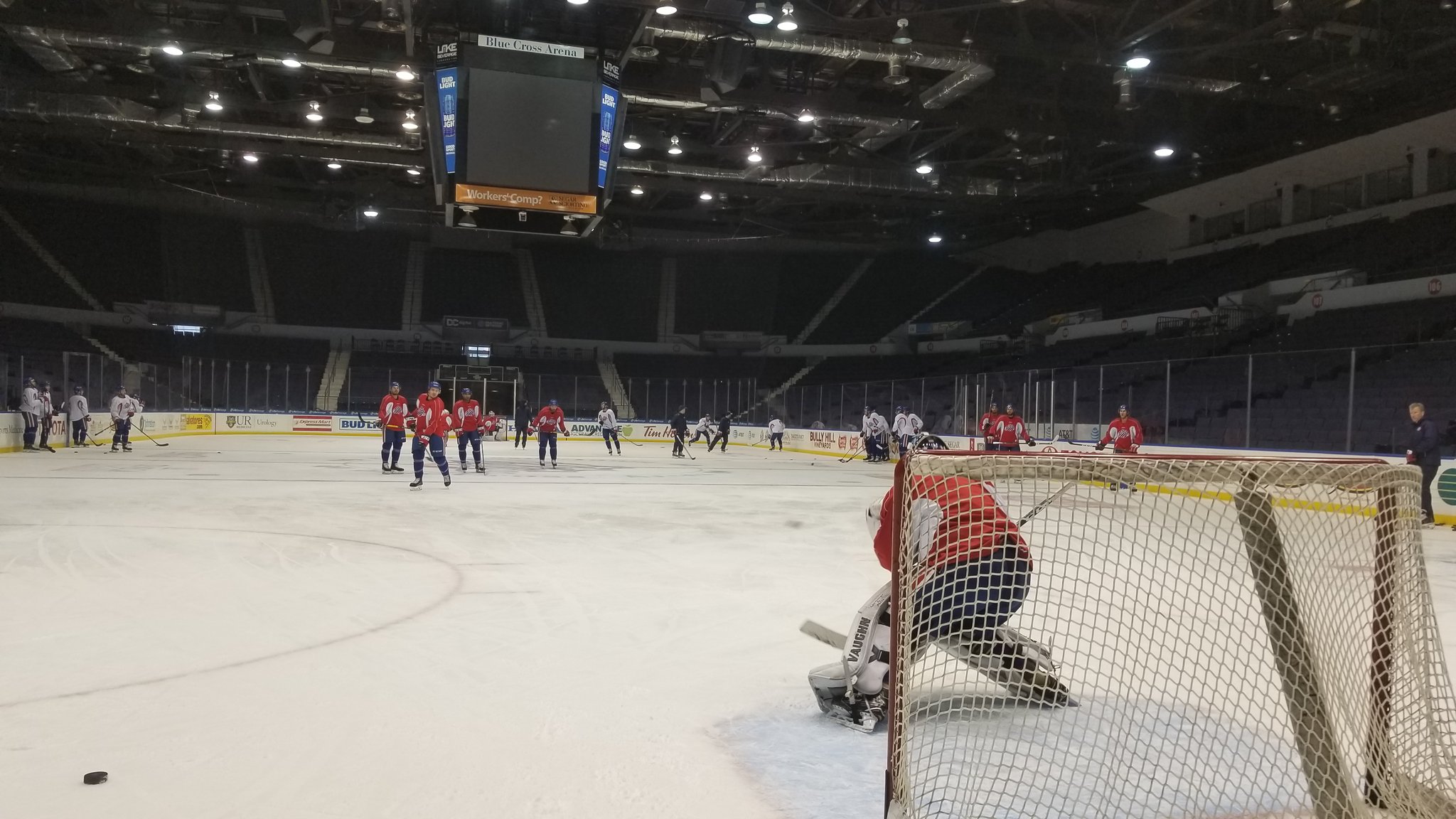 For the first time this season the Amerks are looking at a recent losing streak. In the last five games they’re 1-2-2 and over the last 10 they’re 3-3-2-2. There’s no reason to panic but it’s something that the team is aware of.

“We want to win. The hardest part is staying on top, it’s hard,” Chris Taylor said talking about where they’re at. “Teams are measuring themselves against us, just like we measured ourselves against other teams. We have a target on our back and we know that but we have to make sure we come and play every night because we have a target on our back and that’s a good thing, it makes us better. We have to be better. We have to win a lot more games and string some games together.”

Last weekend they played a competitive game against first place Toronto Marlies that everyone will remember as the Gionta game but they still lost 4-2. The next night they battled back from being down 3-1 against the Binghamton Devils and forced the game into overtime before losing 34 seconds in.

So, what’s the issue? The target on their backs for one thing. Injuries are playing a role as well. Linus Ullmark is banged up and will miss his second game in a row. Brendan Guhle, Andrew MacWilliam, Colin Blackwell and Garret Ross have been out and they had been part of early season wins. Casey Nelson has been called up to the Sabres and was a key part of the defense.

Chris Taylor talked about that saying, “We’re missing a lot of guys right now, one of the parts of the season that we have to go through that we need our depth a lot more than we did at the start.”

The good news is that Ullmark and MacWilliam are practicing with the team which means they shouldn’t be out much longer.

“We have a good enough team but sometimes I feel like we’re so tight that we just don’t want to lose some,” Chris Taylor said. “We have to go out there and just be like hey, let’s take over these games. Lets just go out there and win and be the team that we can be. When we finally get there I think you’ll see us on a really good streak and really good run.”

“Guys have been playing ok. We need to step it up though. This is the time of the year we have to push here and they understand that.”

Adam Wilcox will get the start for the second game in a row with Jonas Johannson expected on the bench to back him up.

Nick Baptiste will be back in the lineup after missing the last six Amerks games while called up to the Buffalo Sabres. Before the call up he had one goal in the previous 10 games.

Even though he hasn’t been scoring a lot his physical presence has been missed. When asked what Baptiste brings Chris Taylor said, “He adds that grit that we need going down the side, driving pucks wide. Just that big physical presence in front of the net and his forecheck.”

Baptiste said, “I’m looking to bring a lot of speed and skill down here. Play my game and help this team get back on track.” He added, “We’ve been great all year. Teams go through little rough patches like this and if we just get back to playing our game and playing the way that’s made us successful all season we’ll be successful.”

This season the Amerks are 3-0-2-0 against Belleville Senators with three of the five games going into overtime. The Amerks haven’t played against the more physical teams like Belleville and Binghamton, they’re hard nosed teams and Baptiste said they have to be prepared for that.

They’ll have the chance to start winning again tonight in downtown Rochester.

Here’s some other random numbers on the record..

Amerks lead the league with 20 games or 42.5% of all games played having gone into extra playing time.

Amerks are 25-22 in straight wins and losses.

Two other teams in the division have been on a roll, the Toronto Marlies and Utica Comets. The Marlies are 9-0-0-1 in the last 10 and the Comets are 8-0-2-0 in the last 10. There’s still a lot of hockey to be played but it’ll be that time of year where teams are watched to see who’s getting better, who’s leveling out and those that fall apart.

Even with all of that which doesn’t paint the best picture they’re still in 2nd place in the division, 3rd in the conference and 4th overall in the league! Points matter and they’ve managed to get them as much as possible.

In case you missed it, defenseman Conor Allen departed the team this week to go play in Germany. He wasn’t getting a lot of playing time in Rochester at all.