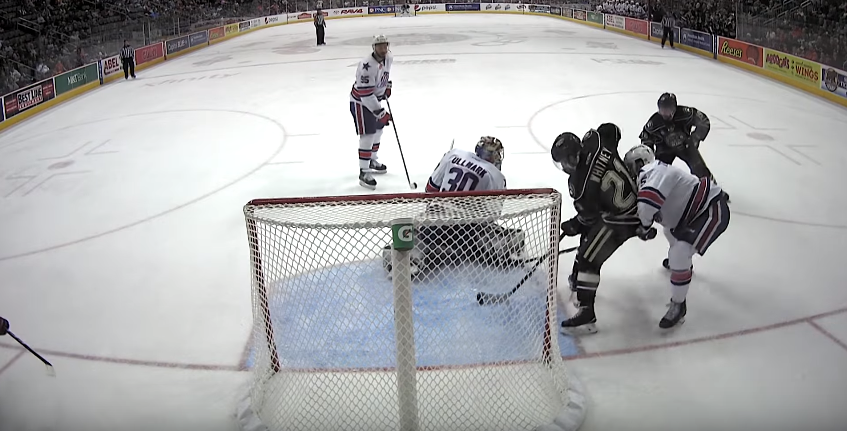 The Rochester Americans continued their league lead in one statistic on Sunday afternoon in Hershey, games that have gone into overtime. The team leads the league with 42% of their games going into overtime.

Hershey Bears forward Wayne Simpson scored with three seconds left in regulation to tie the game 2-2 and send the Amerks into overtime for the 21st time this season.

46 seconds into the first period the tone of the game was set when Travis Boyd put the puck into the back of the net but a call when the Amerks way when the ref called goalie interference. No goal.

Hershey pounded the Amerks in the first leading 14-5 in shots with Riley Barber scoring at 12:24 on the power play. Brendan Guhle was serving two minutes for slashing.

Seth Griffith tied the game at 14:31 of the second period off a pass from Andrew MacWilliam leading a rush down the ice. Griffith went wide and was able to sneak the shot past Vitek Vanecek.

In the third period the game was up for grabs as both teams had been evenly matched.

Kevin Porter created a turnover at the blue line, turned the play around and put a pass on the stick of Eric Cornel for a tip in and 2-1 lead in the game at 17:23 of the third period.

Hershey was hungry to end their losing streak though.Â Before Sunday, the Bears had only one win in their last 13 games. A stretch the Amerks are close to matching with onlyÂ one regulation win in their last 12 games and have now lost five straight.

Wayne Simpson made his way down ice, fanned on his shot attempt and luck was on his side.Â The puck didn’t go far, no one else touched it and he beat Linus Ullmark to tie the game with three seconds left.

In the overtime session Seth Griffith had a breakaway opportunity and was stopped by Vanecek. Less than a minute later the game was over.

Joe Whitney scored the game winner and ended a Hershey Bears losing streak. Riley Barber took the initial shot, Ullmark didn’t get enough of it and Joe Whitney grabbed the puck sitting in the paint and won the game.

The Amerks finally saw the return of two injured defensemen on Sunday. Andrew MacWilliam was out 16 games with a hand injury and Brendan Guhle had missed seven games with a lower body injury.

Linus Ullmark was given another loss on the score sheet extending his streak to eight games. This ties another eight game losing streak that he had at the end of his rookie season in 2015/2016.

Following the overtime loss the Amerks dropped to third place in the North Division behind the Utica Comets. The Syracuse Crunch won and are only a point behind in fourth place.

Back to practice on Tuesday for the Amerks to work on turning things around.