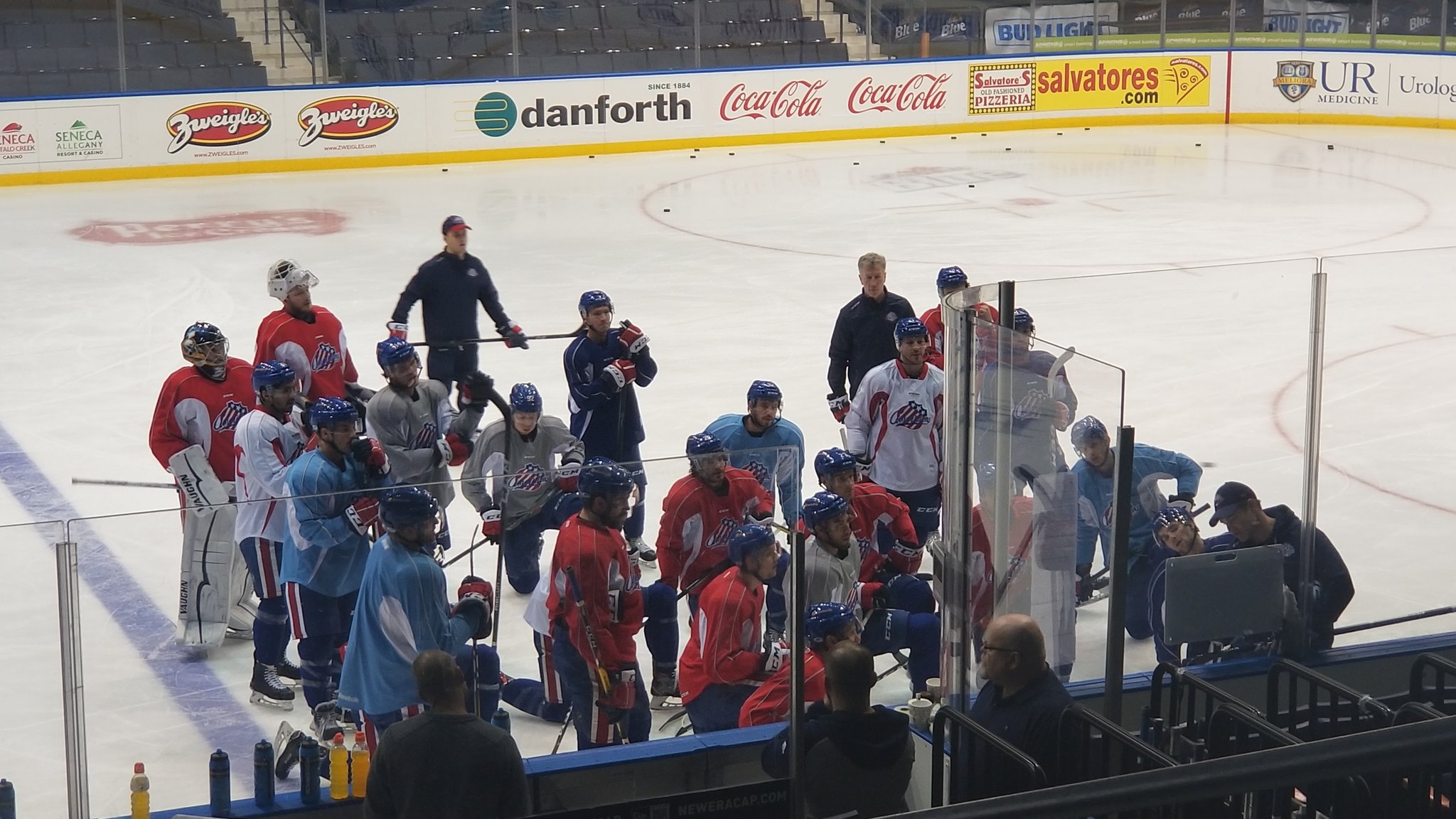 The weekend didn’t go as well as the Rochester Americans wanted on the ice and the week started off with more bad news, leading scorer CJ Smith is out 3-4 weeks with a lower body injury.

Colin Blackwell talked about the CJ Smith injury news saying, “He does it all. Power play, kills penalties. Great teammate, great guy, works hard on and off ice so to lose a guy like that it’s tough. Especially this late in the season where it’s that grind where every single point point matters.”

Chris Taylor shared a little bit of a brighter light on the injury saying hopefully it should only be three weeks. He also said, “Gives another guy an opportunity.”

The injury to CJ Smith happened a few games prior but he was playing through it as it nagged him.

“They both battled through injuries just to stay in the lineup and sometimes that affects you in different ways,” Chris Taylor said. “Maybe it could’ve only been one week or two weeks if he didn’t. Those are the types of kids we want, they want to keep playing, they want to keep battling for the guys.”

The “they” in that quote is referring to Brendan Guhle who was out for three weeks with a lower body injury.

Colin Blackwell is hopeful to return this weekend and will have an immediate impact.

“I just want to get out there as soon as I can and hopefully do what I can to help the team,” Blackwell said after practice on Tuesday. “Coach has been stressing it all year that it’s an opportunity for someone to step up and hopefully make their mark.”

Another player will get an opportunity to earn some playing time. Justin Danforth has been added to the roster for the second time this season. He’s continued to be a leading scorer for the Cincinnati Cyclones. In 44 games he has 28G+30A and is a +26! The 28 goals has him 2nd in the ECHL scoring race and the 58 points has him 2nd in the ECHL behind another former Amerk, Shawn Szydlowski.

Danforth has played in one game this season with Rochester. He had limited minutes in the game and still managed three shots on goal.

“Guys who’ve played 3rd and 4th line, everybody gets an opportunity,” Taylor said.

That was clear in practice with Eric Cornel skating on a line with Kevin Porter and Sahir Gill. Cornel has often been skating on the fourth line but stepped into the game against Hershey and scored.

The season isn’t getting any shorter, it’s time for someone to really stand out and take advantage of all of the opportunities available. It hasn’t happened yet.

The Amerks looked to start winning again,Â but were shutout at home. They went through a tough practice and prepared for a road tripÂ with some returning players. It wasn’t enough, they lost 5-3 vs Lehigh and then gave up a goal with three seconds left and lost in overtime vs Hershey.

That’s only the last week of a rough month. The Amerks only have one regulation win in their last 13 games with a second win in overtime during that span. They have points in nine out of those 13 games which has been the story of the season.

“We have to be better defensively at the right times. We’ve given up timely goals that shouldn’t have been,” Taylor said when asked what they need to do to be better. “In Hershey we had the puck deep in the zone with 14 seconds, pinned in the corner and they still came back and scored a goal.”

Linus Ullmark made a huge save with 43 seconds left in the game. The Amerks cleared the zone twice following the save. Eric Cornel and Sean Malone had the puck pinned against the boards deep in the Bears zone but with four Bears players battling for the puck. The Bears won the battle, the play took off and the Bears scored with 2.8 seconds left.

The loss in Hershey was the eight straight loss for Ullmark, matches his worst streak in Rochester that ended the 2015/2016 season. It’s not a goalie problem though. He isn’t getting the help in front of him that he was.

Taylor added, “We have to tighten up and be better. The guys care. They work hard but there’s little things we need to be better.”

This is the worst stretch of games for the Amerks this season and currently one of the worst in the league as well. The only thing helping is that they’re still in an almost guaranteed playoff spot thanks in part to the continuous points. Rochester leads the league with 21 games having gone into overtime.

With 26 games left in the regular season the standings are now being talked about and looked at. Taylor said, “Everyone’s fighting for these points, these points matter. The guys are concerned about it. We talk about it every day, who’s behind us right now? This is the type of season where you have to start looking at it. The guys understand.”

“These guys need to push and get better, watch video. Come together and stick together as a team and make sure we’re focusing on each other and the team.”

The team had a day off on Wednesday to rest and recover before starting preparations on Thursday for a busy weekend with three games in three days. Home Friday vs Wilkes-Barre/Scranton, Saturday in Binghamton and back home Sunday afternoon vs Binghamton.