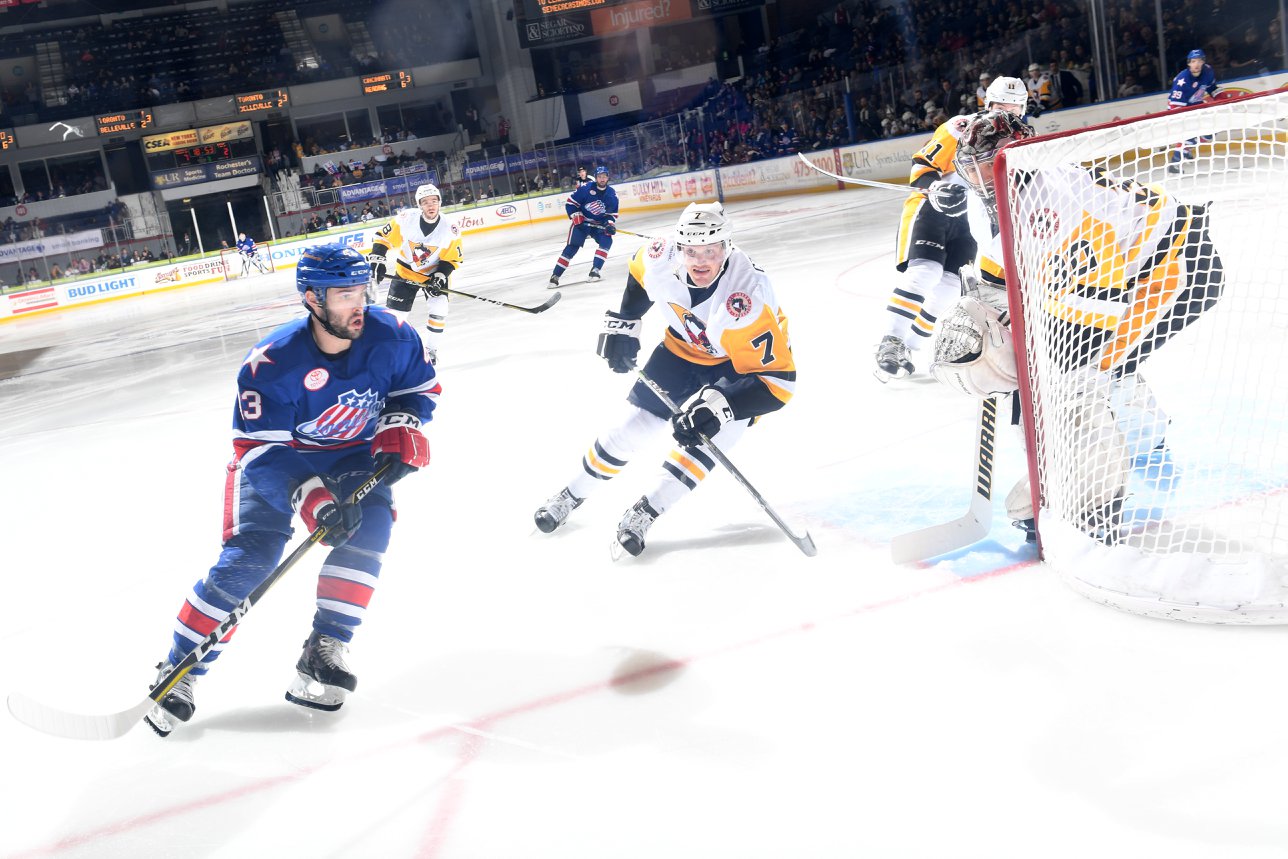 The story of the game was the mind boggling 12 goals that the Rochester Americans scored on Friday night on the way to a 12-3 win over the Wilkes-Barre/Scranton Penguins.

“It was an emotional win,” Criscuolo said. “We had a lot of guys who played with Wilkes-Barre last year and returned a few guys to the lineup. Therefore, a lot of players had that extra jump, so it was a big win for us as we have been in a bit of a rut lately.”

At the morning skate it was a reunion between coaches and players in the back hallways and on the benches as players came out to say hi to those practicing. It was handshakes and laughs on Friday morning but Friday night was the complete opposite.

The big win on Friday night also set some new season high’s in the AHL:

Prior to Friday night the Amerks were on a five losing streak and had only won two out of their last 12 games and only one of those wins was in regulation. It certainly started to raise some questions, why? Injuries? Missing players? Chemistry? Goaltending?

It may have just been the fact that Colin Blackwell was out of the lineup for the previous 13 games. Blackwell set the tone only 90 seconds into the game chasing a puck deep into the Penguins zone and laying a hard clean hit on Penguins defenseman LukasÂ Bengtsson.

VIDEO: This set the tempo for @AmerksHockey tonight.

“That motivated our guys, got our team going,” Chris Taylor said. “Sometimes those types of hits do that and we haven’t had too many of those. It was good to see, especially a guy coming back who’s been injured for a while. It was a spark and frustrated their team right off the bat.”

“They were a little rattled right off the get go,” Seth Griffith said. “I think we just took advantage of them running out of position a bit trying to make big hits.”

The hit sent Bengtsson into the boards and he wouldn’t return to the game. The Penguins also lost two other defensemen in the first period:Â Chris Summers left injured andÂ Patrick McGrath was given a game misconduct. It’s exciting winning game by nine goals but that may help put things into a little more perspective.

“We came out and did all the right things and that’s why we had a lead going after the first,” Taylor said after the game. “We haven’t had that in a long time.”

“The score was just overblown. It’s a tough game for that team over there, they took a lot of penalties,” Taylor said talking about the score. “We scored 10 before and the next couple of games we had a tough time scoring. It doesn’t matter how many you score that night, it’s continual what you need.”

“You never go into a game expecting to score that many but when you do it’s nice and everyone got a piece of the action,” Kyle Criscuolo talked about after the game. “It was fun on the bench but obviously they’re a really good team and we might see them later this year in the playoffs. We just have to stay dialed in to that and if we see them again it’s just not going to be the same.”

The score was 3-0 after the first period with goals from Seth Griffith, Adam Krause and Zach Redmond. By the end of the second period the Amerks were up 7-2. They’d score five more goals in the third period, three of them on the power play and they still took the foot off of the pedal a little bit.

Taylor said, “The last three (power play) goals they were just anybody. I just tried to give guys some ice time, different guys. At that point in the game you don’t want to show up the other team and put your power play out there. I understand, I’ve been in that situation. It’s not fun. We gave guys opportunities and they did well.”

An attempt at describing each goal would be a waste of words. Watch the highlight video at the end.

“The biggest thing for me out of this whole game is Alex,” Taylor said. “He played the game right tonight.”

Alexander Nylander had his first big game with two goals and two assists. The hockey world know’s how much he’s struggled and hopefully it was a breakthrough game for him.

The game started to get dirty late in the third period but the Amerks held their composure and stuck up for each other.

“It’s a tough game for both teams,” Taylor said talking about the way the game went. “Everybody on our bench has been there before and they’re not fun games when it gets to the point like it did tonight. It happens, we just want to be humble about it and go about our business.”

For a recap of the game from a Wilkes-Barre/Scranton Penguins click over to Chirps from Center Ice – “This Scoreline Dozen’t Look Right – Pens LOSE 12-3.”

Seth Griffith said, “Tomorrow’s almost like a rebound night because they’re not going to go in like that every night.”

A well grounded home team after a big win on Hall of Fame night. 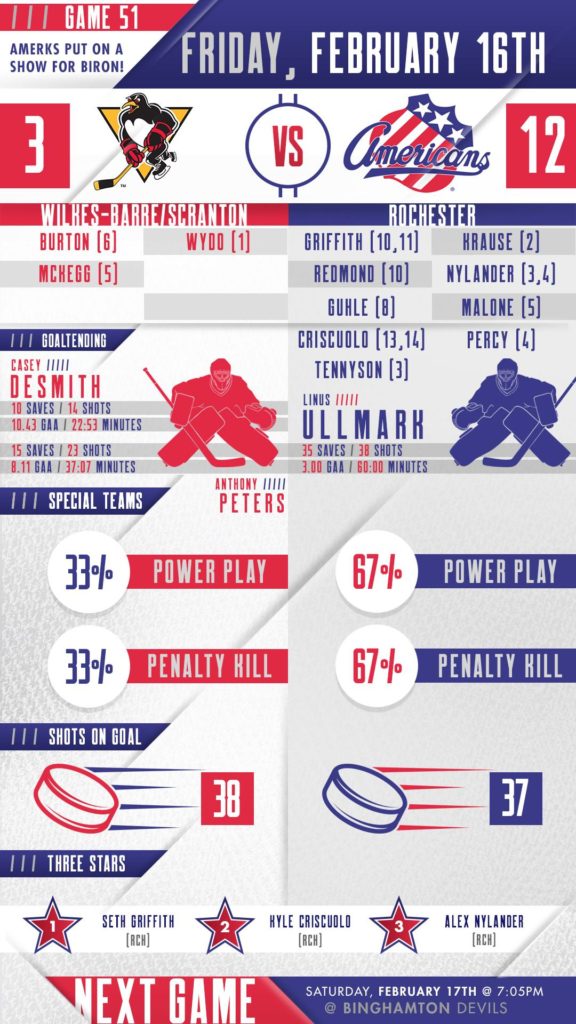