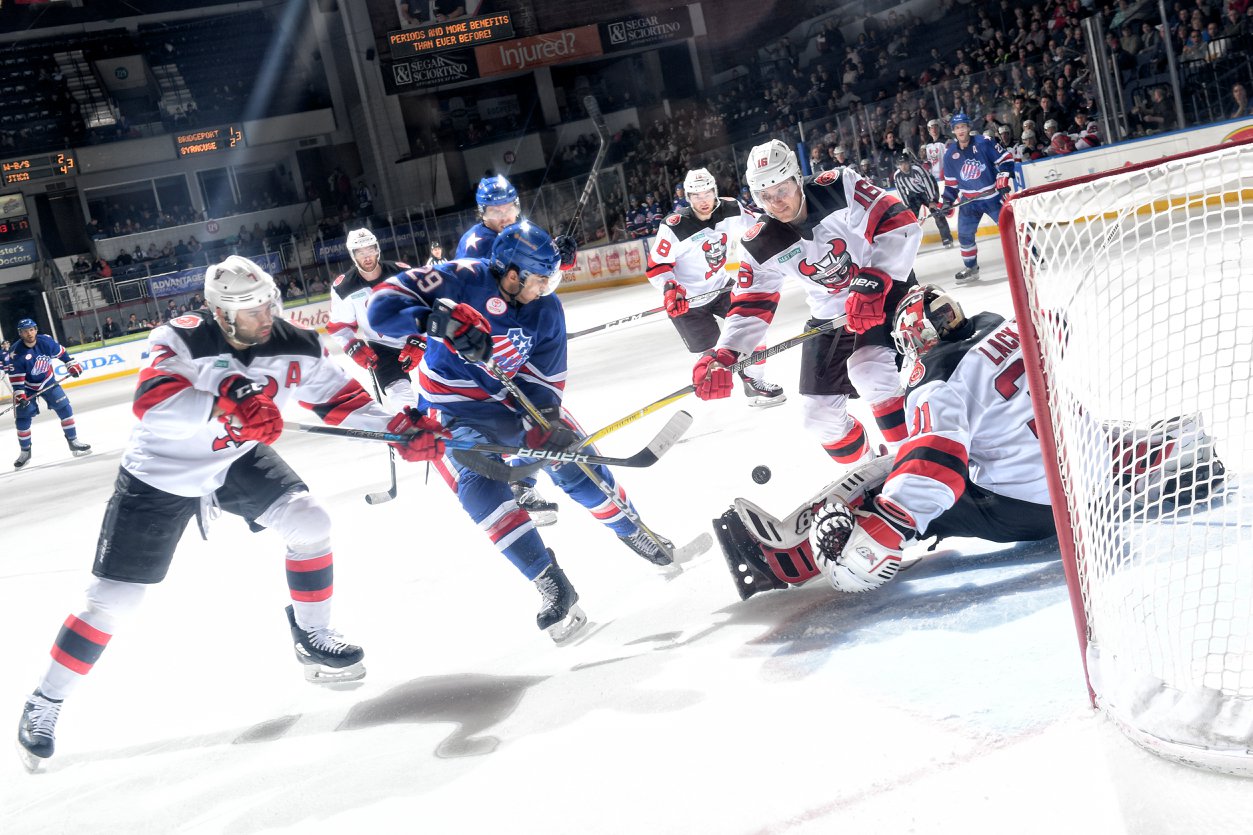 The Rochester Americans may have added a new record to the record books, consecutive games played in with a hat-trick being scored. On Friday night it was the fourth straight game they’ve played in with a player having a three goal game. Only one of the games has been a Rochester player.

Travis St Denis for Bridgeport, Austin Czarnik for Providence, CJ Smith for Rochester and on Friday night it was Nick Lappin for Binghamton. Things are looking good for someone on Saturday night. Too bad all four games have resulted in losses.

These losses aren’t simply because of players called up to the Buffalo Sabres. The team isn’t playing anywhere near 60 minutes and that’s something that the players acknowledge. The only hope for the playoffs is the team flipping a switch and finding a way to play a full game.

“I think all of the guys are frustrated,” Chris Taylor said. “It’s not fun but we played that way and that’s the results we get when we play that way.”

“I think sometimes we like the easy way out. We don’t shoot enough. We think we’re a little more creative instead of you know actually just getting shots off the rush, retrieving pucks, getting it back to the defense, playing the hard way. Sometimes we don’t to do that and it always bites us. Then when we have to we’re tired because now we have to put a lot of pressure on the team we’re trying to fight back and we don’t have enough.”

An argument could be made that there were some bad penalties called but in the 66th game of the season players shouldn’t be putting themselves into those situations.

Chris Taylor talked about the penalties saying, “Unacceptable for our team to take that many penalties. Too late in the year to be telling guys that we can’t take any penalties and that we’re not going to win too many games doing it. It’s very frustrating.”

Stuart Percy scored the first goal of the game on the power play. Danny O’Regan won a battle along the boards, passed it to Stuart Percy in the slot and a quick shot later and the Amerks had the lead.

Nick Lappin carried the puck into the Amerks zone, waited for everyone else to get in the zone, bypassed an Andrew MacWilliam sliding shot block attempt and picked a corner over Wilcox.

Sahir Gill snuck a back handed shot between the pads of Eddie Lack with 3:05 left in the second period to make it a one goal game on paper.

The third goal of the game for Lappin was a 5 on 3 power play goal as he stood wide open to the right of the net.

The final score was 4-2 which may sound close but it wasn’t.

It took 13 minutes into the third period for the Amerks to register their first shot on net.

While talking about shots Taylor said, “We need to shoot the puck more. Our team does not like to shoot as much until we get behind and then all of a sudden we’re shooters. We had some great chances and nothing went in because we didn’t give ourselves that puck luck from the start.”

After the game Zach Redmond said, “We’re good for stretches but not long enough to be winning games right now.”

Flat in the first, decent second, they vanished in the third.

“Our first period to me was our worst in a long time,” Chris Taylor said. “We had 12 shot attempts and then all of a sudden in the second we had 32 so that’s a mindset. You don’t go from 12 to 32 by not getting ready for it. I was more disappointed in that. We have to be ready for every shift, every period. We’re building towards something and we didn’t start off that way. It’s very disappointing.”

Binghamton is now 5-3-1 against Rochester this season with one game remaining. When Chris Taylor was asked what it is about Binghamton he talked about how they play straight lines, they play hard, good power play and also added, “I don’t know if we respect them enough and that bothers me too.”

Chris Taylor when asked what needs to be tweaked for Saturdays game, “Everything.”

CJ Smith left the game halfway through the second and appeared to be favoring the same leg he just returned from an injury on. He didn’t return to the game and left the arena on crutches.

Laval lost which means the Amerks would’ve clinched with a win. They’ll get a chance again on Saturday night in one of three scenarios: