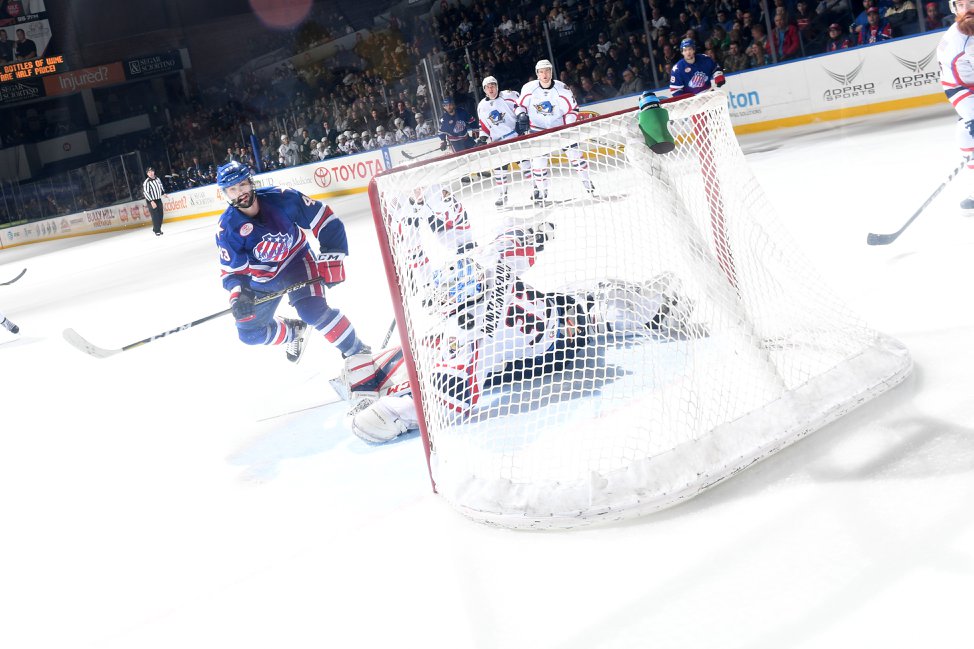 The chase is on for the seventh Calder Cup in Rochester Americans history. The Amerks officially clinched spot in the 2018 Calder Cup Playoffs and it was a giant sigh of relief in the locker room. The door opened a little bit later than usual as the team enjoyed the moment together that they’ve worked for all season. They might be the first team to clinch a playoff spot that has lost more games than they’ve won but once you’re in you start a brand new season with a new focus.

Only four of 16 teams have clinched a playoff spot so far. Rochester follows up on clinches from Toronto, Syracuse, and Lehigh Valley. The next team to clinch should be the Utica Comets and that would lock up the North Division. It’ll be a pretty big upset if the eventual Calder Cup champion isn’t from the North.

“It’s unbelievable for this community,” Chris Taylor said after the game. “The players who’ve come in here, who were here last year. Great feeling for everybody. Great feeling for people who work in this building. People who have been part of this organization for a long time. It’s great.”

“The whole community should be excited. Our players are excited. That’s what it’s all about. It’s bringing everyone together, nothing better in sports in going far and pushing in the playoffs. I’m really excited.”

An ugly four game losing streak ended on Saturday night and was put into the past when the final horn sounded and the Amerks won 4-2 to make it into the playoffs on their own terms. They’ve had a lot of help from the bottom three teams in the division not doing so well but the last thing they wanted was to clinch a playoff spot because they lost and so did someone else.

After the game Kevin Porter said, “It was kind of weighing on us the last few games. Thinking about it a little too much and we finally got that monkey off our back.”

They’ve known since January that they’d be in the playoffs but until it became official it’s something that had loomed over their heads.

Porter added, “That’s what we’ve been working for all year and now the work’s just going to start.”

Colin Blackwell had a two goal night and he’s been a huge key to the success of this team all season. When Blackwell tallies a point the Amerks a better team. They’re 14-4-2-1 or 14-7 when he has a goal or an assist. When he doesn’t get a point the team is 14-10-5-2 or 14-17.Â When Blackwell was out of the lineup injured the Amerks had aÂ 3-5-3-2 record. All signs point to Blackwell scoring and being a key to losing less hockey games.

“He’s one of those guys that never gives up, he’s a hard worker and does everything,” Chris Taylor said when talking about Blackwell. “He’s been a huge addition to our hockey team and when he was hurt we definitely missed him.”

It wasn’t the prettiest game thanks to horrendous penalties called against both teams but the Amerks definitely worked for the win. The second goal against is one that Adam Wilcox would love to have back but he made up for it with a big pad save early in the third period and it gave some new life to the team.

Halfway through the third period with the game being tied 2-2 there was a question about whether or not they’d go for the win or simply hold on for the one point needed. They went for the win.

Matt Tennyson took a shot at net that Colin Blackwell caught the puck instead of redirecting it, made a quick move to the outside pulling goaltender Samuel Montembeault out of position and put it into the net. Amerks took a 3-2 lead.

After the game Colin Blackwell said, “The last four or five games we’ve had a couple bounces. Kyle Criscuolo always told me you make your own bounces, you make your own luck. I think that’s true. We may have been bearing down the sticks, cheating a little bit. Tonight everybody supported each other.”

It only took 62 seconds for Danny O’Regan to put the Amerks up 4-2 and secure the win. The impressive part of that O’Regan goal was Seth Griffith making a quick decision to avoid a line change and break up a 2 on 1 against Adam Wilcox. He took off into the defensive zone, broke up the play, sent a pass to Kevin Porter who took off down ice and sent a perfect pass to O’Regan for the goal.

Colin Blackwell and Danny O’Regan are no strangers to a Calder Cup playoff run. They played together last season withÂ San Jose Barracuda, a team that made it to the third round losing to Grand Rapids, the team that went on to win the Calder Cup.

After the gameÂ Colin Blackwell said, “We have a heck of a group here that’s better than the team that I played on last year and I think we can make a heck of a run and I can’t be more excited about it.”

That’s a pretty bold statement. That Grand Rapids team that Blackwell and O’Regan lost to went on to win the Calder Cup and featured Kyle Criscuolo and Nathan Paetsch.

Seth Griffith, “We’ve had a lot of ups and downs this year. We’ve played really good hockey and we’ve played some bad hockey too. As long as we clean up what we need to I think we can have a good long playoff run.” He added,Â “Feels good to be headed into the playoffs but we can’t let off the gas here. We have 9 games left. We have to play playoff hockey these next 9 games.”

A very confident Chris Taylor (as a coach should be) said after the game, “To me, I think our team should go deep. Should go very deep. We should get by the first round but it’s going to be hard. First round is the toughest one to get by. I believe in our team, I believe in our guys. I believe they want to go far.”

One player that’ll be looking ahead to the last nine games of the regular season and beyond is Sean Malone. He’s been a third line player all season and for the first time moved up to the first line and play alongside Kevin Porter and Danny O’Regan.

Consistency means more than points in a development world and Sean Malone has fulfilled that role in 64 straight games this season. He was a scratch for the first three games of the season and hasn’t looked back since. Only one other player has played in more games this season and that’s Sahir Gill, someone that didn’t miss a game all season until Saturday night due to illness.

I asked Taylor after the game about Malone’s promotion and he said, “He’s deserved it. One of those guys that’s playing the right way all the time. He’s bringing some offensive talent to him. He can play left wing, play center, take face offs.. he’s one of those versatile guys that you love on your team.”

There’s going to be a lot of hard decisions ahead for Chris Taylor heading into the playoffs. With Casey Nelson and Brendan Guhle coming back on defense who gets scratched? Matt Tennyson? Stuart Percy? Andrew MacWilliam? Calder Cup champ Nathan Paetsch?

IfÂ Casey Mittelstadt decides to turn pro where does he fit in? If the Amerks are healthy does Hudson Fasching or Alexander Nylander get scratched to make room for him?

An abundance of players isn’t a bad thing for a coach that has stressed competition all season. There’s three weeks left in the season for every player to make their case as to why they should be in the lineup for game one of the Calder Cup playoffs.

Spread the word Amerks fans, it’s up to us to help pack the barn and continue the excitement for this team. 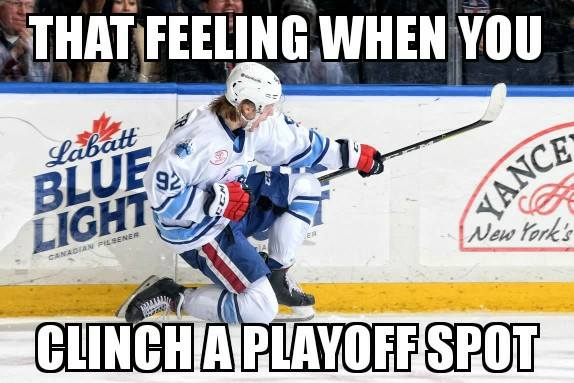