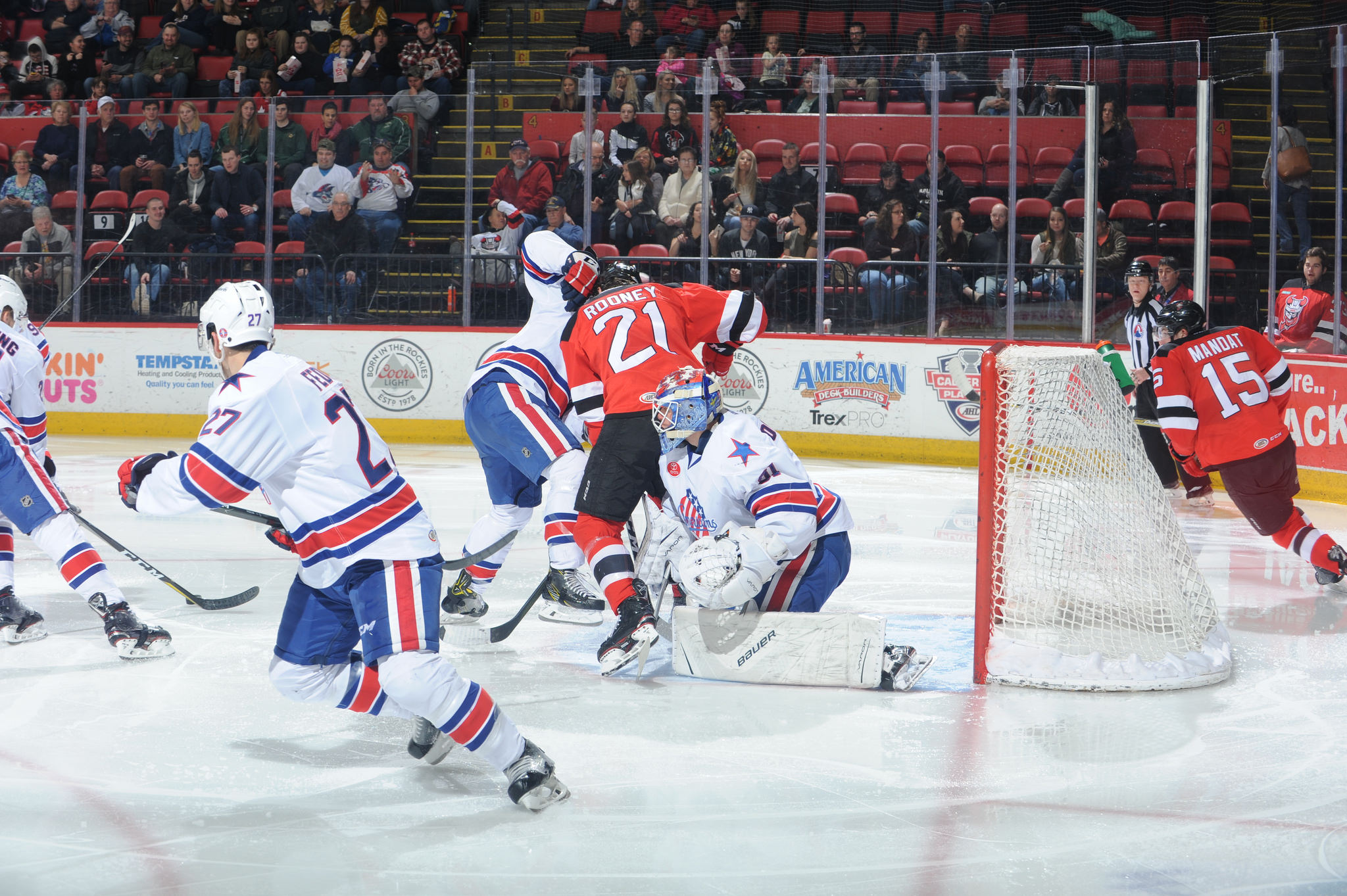 The Rochester Americans went into the third period down 3-1, scored four unanswered goals and won 5-3. With three minutes left in the game it had the feeling of heading into another overtime game. The team said hold on, we’ve got this.

The first 40 minutes of the game had a different feel to it. Three straight games the Amerks have allowed the first goal and another first period that didn’t start off the way the Amerks wanted.

(Featured picture from the Binghamton Devils)

(gif highlights at the bottom)

Steven Santini and Blake Speers scored two goals within 4:07 of each other to give the Devils the early lead. The first goal was sloppy play in the Amerks own end followed up by a power play goal with Tennyson in the box for hooking.

Eric Cornel scored his eight of the season to get within one. Will Borgen played the puck down the boards to Adam Krause, he passed the puck to the front of the net to Garret Ross and Cornel found the rebound.

Binghamton took a 3-1 lead at 13:17 of the second period when Jacob MacDonald scored a power play goal. Zach Redmond was in the box for interference, looked more like slashing, and the penalty kill unit allowed another goal. MacDonald fired a shot from the top of the face off circle and beat Johansson glove side.

Rochester cut the Devils lead to one goal when Eric Cornel scored his second of the night and ninth goal of the season. Adam Krause made a play behind the net to Garret Ross on the sideboards, pass to Cornel who crashed the front of the net.

Hudson Fasching created a turnover on a penalty kill, won the battle for the puck, sent a quick pass to Colin Blackwell who tied the game 3-3 at 7:29 of the third period for his 12th goal of the season.

Back on November 25 the Amerks were also down 3-1 going into the third period when goals from Brendan Guhle and CJ Smith lead a comeback to a 4-3 overtime win. Casey Nelson had scored the overtime winner in that game.

The comeback happened again this time with goals from Eric Cornel, Colin Blackwell, Sean Malone and Hudson Fasching in a dominating third period.

Adam Krause won another battle behind the net, passed the puck to Garret Ross who found Eric Cornel in front of the net again and the Amerks were within one at 3:55 of the third.

Sean Malone scored his 10th of the season on a breakaway pass from Nathan Paetsch to complete the comeback and earn the honors of the game winning goal.

They weren’t done yet. Eddie Lack headed to the Devils bench for an extra skater and Colin Blackwell sent a pass to Hudson Fasching for an empty net goal.

Colin Blackwell now has 20 points (7G+13A) in 18 games since returning from injury.

Next game for Rochester is Wednesday night in Laval.

Line combinations that started the game:

Some sloppy play results in Steven Santini scoring and Binghamton takes a 1-0 lead. 4 of their guys down low to two for the Amerks. pic.twitter.com/QyIWGKavjy

Devils take a 2-0 lead with a power play goal from Blake Speers. Tennyson was in the box for hooking. Can we call a mulligan on this game and start it over? pic.twitter.com/xOnRDiYMu7
â€” Let’s Go Amerks (@LetsGoAmerks) March 31, 2018

Cornel scores! From Krause and Ross. Credit Borgen for playing the puck from the point to keep the play alive. Devils leading 2-1. pic.twitter.com/VEwetEcTPQ

Krause to Ross to Cornel and the #Amerks within 1! pic.twitter.com/CaOStEbQkh

Paetsch sends Malone on a breakaway and he scores!! #Amerks up 4-3 with 2:33 left in the 3rd. Third goal of the period for Rochester. pic.twitter.com/kZDiUAyEmt
â€” Let’s Go Amerks (@LetsGoAmerks) April 1, 2018

Colin Blackwell to Hudson Fasching for an empty net goal! #Amerks win 5-3 with 4 goals in the 3rd period. pic.twitter.com/XgwuXELAsM