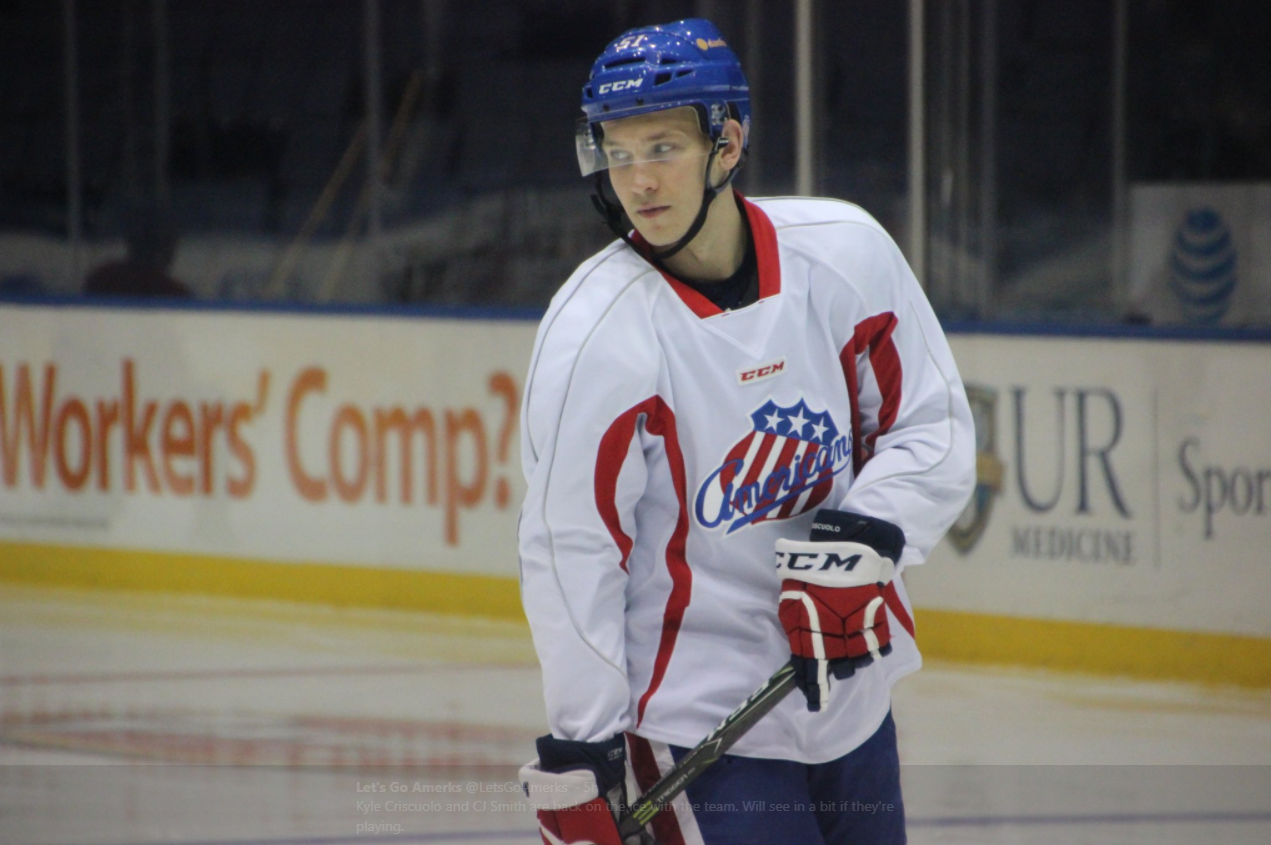 It’s the first week of April, it’s snowing out and the Rochester Americans have five games left before the playoffs. The final stretch starts tonight at home against Belleville. Kyle Criscuolo will be back in the Amerks lineup after missing 13 games while up with the Buffalo Sabres (even though he was injured the whole time).

Criscuolo is returning to the Colin Blackwell show as the Amerks attempt to win their fourth straight game. In the last five games the Amerks have won four games with Blackwell scoring three of the four game winning goals. Over the course of those five games he has 11 points (7G+4A).

In 50 games with the Amerks this season Kyle Criscuolo has 34 points (15G+19A). He’s been a key part of the offense all season and comes back at the right time to keep the momentum moving.

I asked Criscuolo about the way Blackwell has been playing and he said, “When he was healthy he was always this dynamic. He’s been playing great and not surprised at all. He can do it all. He’s a smaller guy but he’s physical, can shoot the puck, make plays and he’s playing really confident right now.”

“There’s no surprise with him,” Chris Taylor said about Blackwell. “Unfortunately when he got hurt in the middle of the season we lost a big guy in our lineup. Since he’s come back he’s done the same thing.”

Belleville is in Rochester tonight and also next Friday and even though they’re out of the playoffs they’re still considered a dangerous team to play against. Chris Taylor talked this morning about how those players are all playing for contracts at this point and just playing to play, they have nothing to lose but a lot to gain by finishing the season strong.

In six games played already this season the Amerks areÂ 3-1-2-0 against them. This also means that Belleville isÂ Belleville 3-2-1-0 against Rochester.

Jonas Johannson is one of those guys that is competing right now. He’s won three straight after Adam Wilcox was called up to join Linus Ullmark in Buffalo. In the three games he has a 2.67GAA and .891SV%. He’s making the big saves at the right times which has kept the team in the games to win.

Zach Redmond is another competitor. He earned league honors this week being named to theÂ 2017-18 AHL Second All-Star Team. He’s currently leading the Amerks with 46 points (15G+31A) and is three goals away from tying a franchise record for most goals in a season by a defenseman.Â Rick Pagnutti set the 18G record during the 1972-73 season.

“It’s a nice honor, that sort of stuff never happens without your whole team and we’ve been solid all year and I’ve been the benefactor of that,” Redmond said when asked about it. “It’s a big honor and good way to cap off the regular season.”

Redmond talked about what’s contributed to his career season saying, “A lot easier to find your groove and you don’t have to worry about what two teams want out of you going up and down. Not so great in that standpoint that I haven’t been up a whole lot but it’s been nice to be on one team and one spot and settle in here.”

CJ Smith is practicing with the team again but isn’t expected to play this weekend.

Judd Peterson and Vasily Glotov are the two forwards that will be scratched tonight along with Arvin Atwal on defense.

Glotov played his first AHL game on Wednesday night in Laval and Chris Taylor was impressed with what he saw. Glotov didn’t play a lot of minutes in the close game but Taylor talked about how he brought a spark to the game. Taylor also said it was fun to put him in the lineup because of how much the kid loves the game and works hard. We may not see much of him for the remainder of the season but he’ll be a big part of Sabres development camp this summer and likely back with the Amerks in September. You can’t miss him around, he’s always smiling. 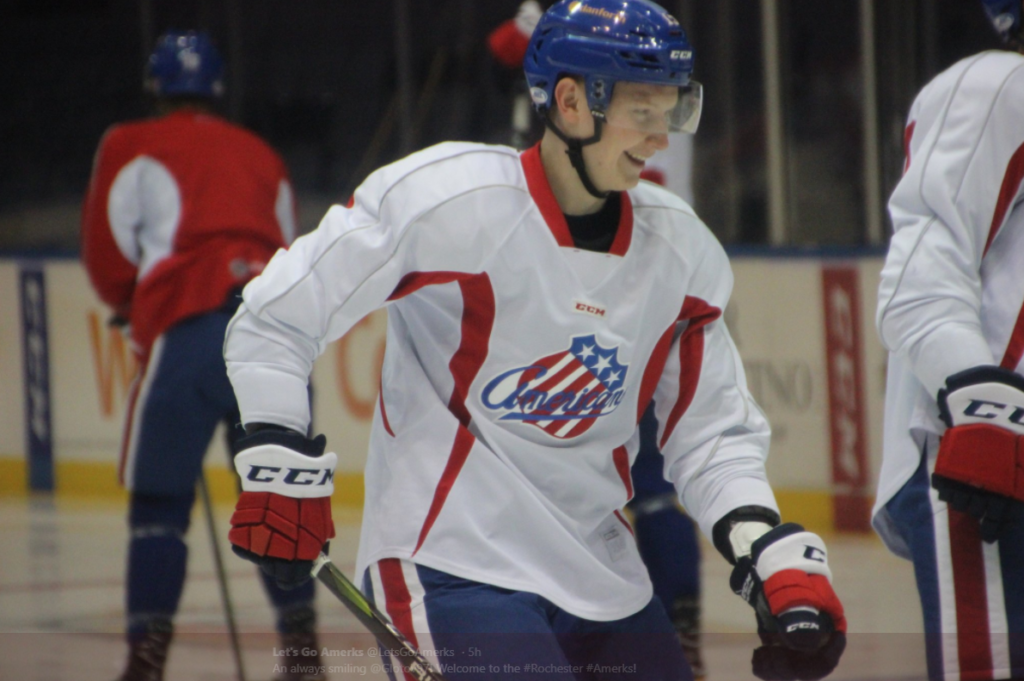