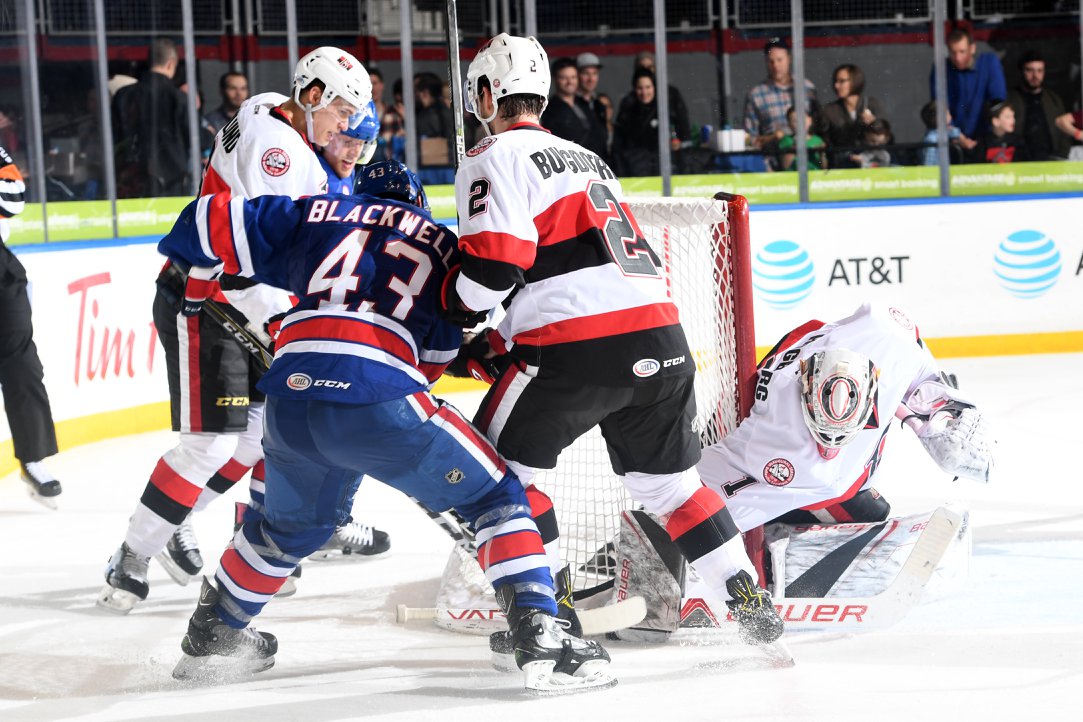 The playoff bound Rochester Americans went into the game on Friday night riding a three game winning streak and left the building wanting to have a short memory forgetting that the game against Belleville took place. The Senators scored four second period goals on the way to winning 5-1.

For what it’s worth, Belleville also beat Toronto and Utica the last time they played. Rochester isn’t the only team that struggled against them. Syracuse didn’t have a problem.

Colin Blackwell scored with 1:29 left in the first period to give the Amerks a 1-0 lead. Blackwell took a few strides into the slot, Danny O’Regan put a perfect pass on his stick and with a quick release it was in the back of the net. That’s eight goals in the last six games.

Belleville scored three goals in the first 4:11 of the second period, a fourth goal with 35 seconds left and the Amerks were boo’d off the ice at the end of the second period. The first goal was short handed. A playoff bound team heard loud and clear that the fans in attendance weren’t happy.

“We came out flat in the second and made some critical errors and got behind the eight ball,” Nathan Paetsch said after the game. “We were chasing the game from there on.”

Rochester managed 12 shots on net against Belleville in the second and even more blocked shots. The problem was the quality of the shots. Marcus Hogberg had an easy night for the Senators.

“They outworked us tonight and that was the story of the game. Stuff like that is unacceptable and can’t happen especially this late in the season,” Colin Blackwell said after the game.

Chris TaylorÂ talked about Blackwell saying, “He always plays well. He’s one of those guys that it doesn’t matter who we play, he plays the same way. A lot of guys could benefit watching him.”

“Today we struggled not sticking to our identity, getting puck deeps and supporting each other throughout the ice,” Colin Blackwell said. “If we stick to our style of hockey I think we’ll be successful.”

Chris Taylor talked about frustrations from the bench saying,Â “Just that we thought we could make one more play instead of playing fast. There’s times that I thought we could have shot and we decided to pass, times I thought we should’ve passed and we shot. We just weren’t into it.”

Jonas Johannson didn’t have the best game but he also didn’t get a lot of help from any of the five players in front of him. Four goals were scored on Johansson and one on Kasdorf with 30 seconds left to go in the game.

You can watch the highlight video below that has the goal scoring.

Turnovers by a number of players were costly but so were penalties. A comeback was unlikely down 4-1 going into the third but the chances disappeared with the penalties. Sean Malone served two minutes for hooking at 5:02 of the third and in the last 10 minutes of the game Garret Ross had six minutes in penalties.

Asked about having a game like that this late in the season Paetsch said, “I don’t think that’s a big major concern. Obviously we’re coming off winning three in a row and a little hiccup here. Tomorrow’s going to be a big test.”

Blackwell looked ahead saying, “Just a bump in the road and I think we’re going to get back after it. Going to have that winner championship mindset. It’s a new day tomorrow, new day, new opportunity. We have a team that’s in first place and we just have to have a short memory.”

Toronto clinched first place in the North Division, Syracuse has clinched second place and Utica has moved ahead of Rochester into third place.

Coaches and players say it doesn’t matter who is played in the first round of the playoffs because in order to get to the third round they’ll have to play the other teams.

Toronto is in Rochester on Saturday night and it’ll have a lot more meaning than the forgetful Friday night game did.