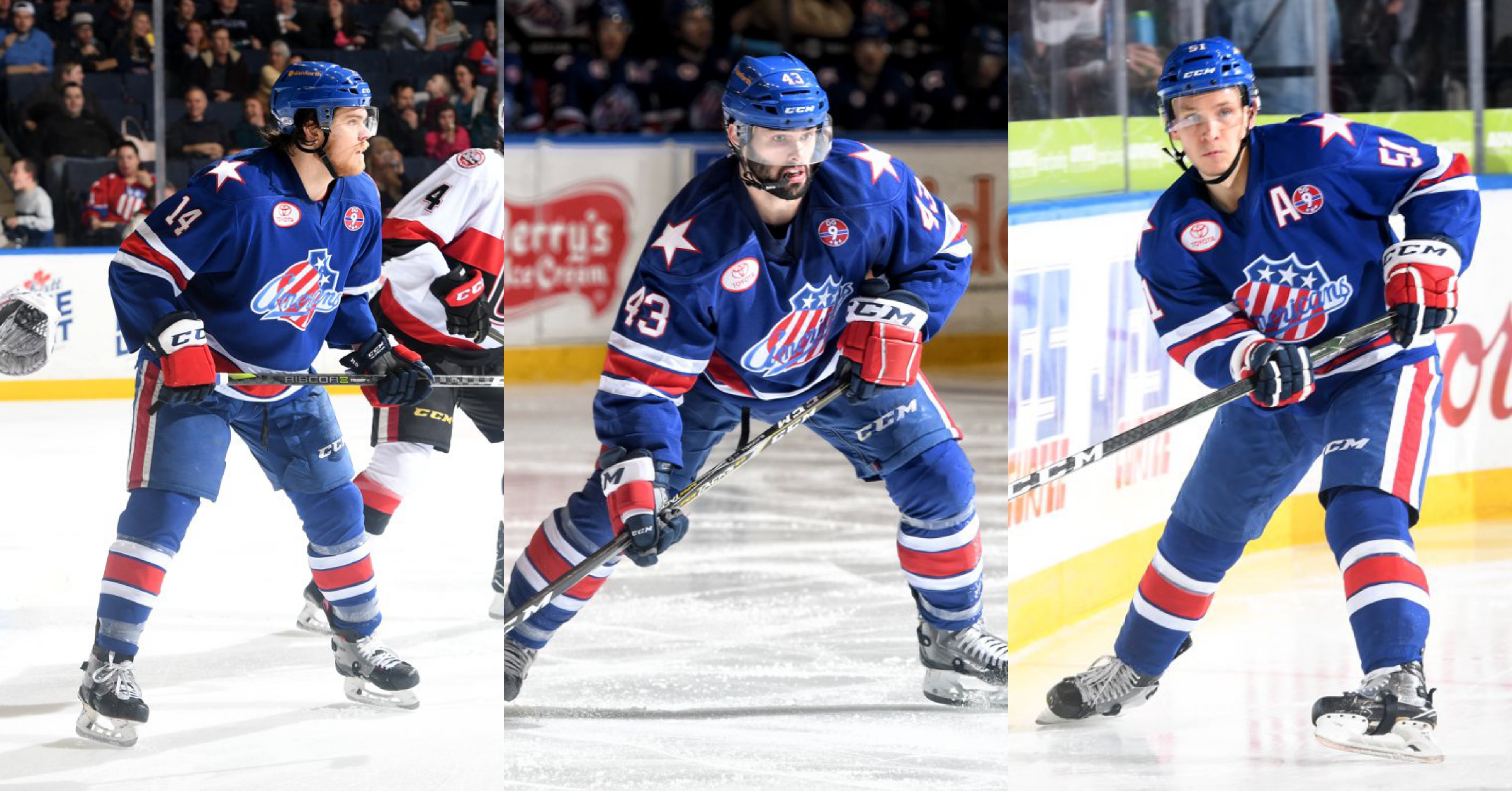 Heading into the 2017/2018 season two Harvard graduates and teammates knew they’d be playing together in Rochester, Sean Malone and Kyle Criscuolo. When the Buffalo Sabres opened prospect camp in September a third Harvard graduate and former teammate made an impression and earned a roster spot – Colin Blackwell.

Tonight, the trio will be three of the Amerks four centers in game one of the 2018 Calder Cup playoffs. The other center startingÂ tonightÂ is Danny O’Regan and there’s a connection there as well. O’Regan was at Boston University, his brother Tommy played at Harvard. They’ve all known each other well.

“Oh yea, it’s really exciting,” Kyle Criscuolo said with a smile when asked about all of them playing together. “I don’t think we would have necessarily thought this would be happening if you told us four years ago that we’d all be here playing in the playoffs in the AHL together. There’s a lot of things happening and guys go to different teams, but we’re pumped to be together and this whole team is really tight knit.”

When I asked Colin Blackwell if he could have predicted playing pro hockey with these guys he said, “Definitely not. I didn’t really know what my future had in store in store for me and now I’m able to share this experience with two of my best friends from school.”

“No to be honest, not at all. Kind of funny how we ended up in the same place,” Sean Malone said when asked about if he ever thought they’d be together in the pro’s. “I know Colin was originally drafted by San Jose, went to Barracuda. Crisco went right to Grand Rapids. Those are three different places and for us all to end up in the same place for my first year is pretty cool.”

Blackwell and Criscuolo graduated together in 2016, Malone graduated a year later in 2017.

AnÂ AHL contractÂ was offered to Blackwell after eight games into the Rochester Americans season. He was an important part of the early season success for the team that wasn’t fully realized until he was injured. Blackwell played his first professional season with San Jose Barracuda, a team that made it to the third round of the AHL playoffs last season. He was originally drafted in 2011 in the 7th round (194th overall) by the San Jose Sharks.

Kyle Criscuolo played his first full professional season with the Grand Rapids Griffins, the 2016/2017 Calder Cup Champions. This was also the team that knocked Blackwell’s team out of the playoffs. Criscuolo was a Captain at Harvard, undrafted and his first minor league deal was from the Detroit Red Wings to play with Grand Rapids.

The rookie of the trio and the only Buffalo Sabres draft pick is Sean Malone. His teammates refer to him as Mugsy. He was scratched the first three games of the Amerks season and went on to play in the remaining 73 games of the regular season. Malone was also awarded the most improved player award voted on by teammates.

“Having that support network here has been awesome,” Blackwell said. “Hopefully we can ride the wave together.”

A friendship isn’t what brought them together though, it’s their talent and hard work as players. A phrase that has been used a lot is “finding the right players” and this trio fits that mold.

I had asked Randy Sexton earlier in the season what the right player is and he said, “Itâ€™s a lot of things, part of that is our secret sauce so I donâ€™t want to give it away, but they have to have the right attitude, obviously have to have a fundamental skill base, have to be willing to compete and they have to be of strong character.”

Sean Malone has played more of a defensive role this season with an occasional scoring touch. One of many important roles that Chris Taylor has relied on him is at the end of close games to shut down an opposing team.

“I always thought that’d be my role to have poise in situations like that,” Malone said. “Make good plays defensively and keep pucks out of the net. I want to keep excelling at that and I think that will be pretty close to my role at the next level.”

Randy Sexton was on WGR550 and mentioned Malone saying, “Sean Malone’s role at the start of the year was more of a defensive player. He can bring some offense, but you don’t make the NHL if you can’t play solid defensively. He’s gotten better every day. He brings that tough-minded, warrior mentality every day.”

Watch Colin Blackwell play in any game and you’ll see a tough-minded player as well. Blackwell has said that his injury this season was a blessing in disguise. He came back energized with fresh legs and has been full speed ever since. Forcing turnovers, scoring goals, assisting on goals and more importantly winning face offs.

They all have a team first mindset and with that success as individuals has followed.

While the guys are having fun together so are the parents. Criscuolo said,Â “It’s fun for our parents too, they’ve known each other for quite a while coming to the rink together.”