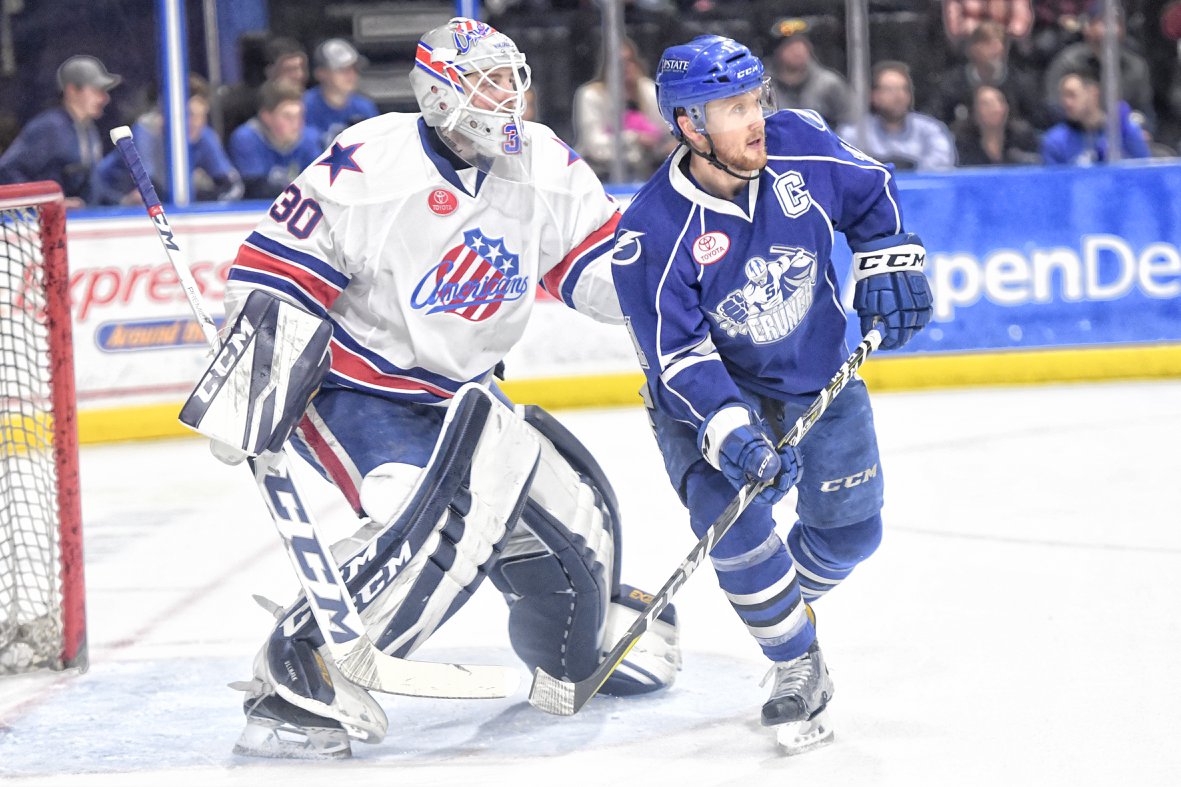 The last 20 minutes of hockey on Friday night along with the post game comments felt like the middle of a losing streak in the middle of the season. That’s not the way the first game of the playoffs should end.

One team in this series went to the Calder Cup finals last season and the other team lost more games than they won but still made it into the playoffs. The bright spot is that it’s only one game and this Amerks team has shown all season that they can respond and bounce back.

The first period started out strong with Kevin Porter leading a two on one with Justin Bailey down the ice but Eddie Pasquale got a pad in the way preventing Bailey from lifting the puck.

Everything from that point on was chasing what the Syracuse Crunch were doing. The Crunch were 11-1 on home ice last season in the playoffs and if the Amerks want to have a chance they only have one option for game two in Syracuse on Saturday night – win.

Taylor Fedun took a stick to the face that sent him to the locker room to get stitched up in the first period. There wasn’t a call on the play and the Crunch scored.

Less than a minute later Zach Redmond scored a power play goal from the point with his signature half slap shot, half wrist shot.

Redmond talked about the game as a whole saying, “I thought we came out hard. I think in the playoffs you need everybody kind of on the same page and I don’t think everybody was maybe playing as hard as we needed to just from a physical standpoint. I think our effort was there but they come hard and we need to find a way to match that.”

Syracuse took the lead again after Rochester failed on at least three different chances to clear.Â Gabriel Dumont sent a pass to Jamie McBain and scored in the simplest way possible, throw it at the net with the goalie screened and see what happens. It went in the net.

Kyle Criscuolo scored off a feed from CJ Smith with 51.9 seconds left in the first period to tie the game 2-2. That should have started a new hockey game. It didn’t.

The Crunch took a 3-2 lead only 1:44 into the second period and that would have been all they needed to win. Dominik Masin was standing to the right of Ullmark and scored on a second chance rebound. Brendan Guhle wasn’t able to clear the puck, two players were in front of the net and Ullmark was left scrambling.

Some notes and tweets from the rest of the 2nd period:

There’s no stat available that mentions how many times off sides is called but Friday night the Amerks were called for it a lot more than usual. When asked about more off sides being called Chris Taylor said, “We had a game plan of doing things a certain way and some guys didn’t want to do it the certain way that we wanted to at that time, that’s execution.”

Anyone could have won the hockey game going into the third period but it was obvious which one was going to. Rochester continued chasing Syracuse around the ice. The Crunch scored three times, one was an empty net goal. Gabriel Dumont finished the game with 3G+1A.

“In the third they took over with the physicality and that’s what’s disappointing to me in that respect. I thought we’d come out a lot harder and a lot more physical,” Chris Taylor said. “We have to go through guys. If you’re going to win this series you have to play the man. Give credit to them, they came out in the third period like they went to the finals last year. They have some experience and we have to be better tomorrow. Said it all along it’s going to be a long series.”

After the game Kevin Porter said, “It was a great game going into the third and then I’m not sure what happened but they took over in the third and scored a couple goals there.”

Porter also said, “We have to shoot the puck more, we have to get more opportunities and get more rebounds and second chances. It was probably a little closer than the score showed but we have to be better.”

“I thought that we started off pretty good. Had a couple of chances, played hard against them,” Chris Taylor said after the game. “We came out of the first period and then second period I thought we played well again. Had some breakaways and we couldn’t finish on some of them. For some reason I don’t think the third we came out very strong. They came at us hard and we didn’t respond very well with it.”

Kyle Criscuolo, “We just need to keep getting pucks to the net and keep it simple on the break in.”

Benoit Groulx probably liked what he saw his team do in the third period and will be coaching them to repeat it on Saturday night. A team shouldn’t be talking about needing to shoot more pucks to the net in the playoffs.

Looking ahead Zach Redmond said, “We know our game plan. We know it’s made us successful all year. It’s a couple of bounces here and there. You can see it, it’s a tight game. I think the scoreboard looked a lot worse than it was tonight. We know what we’re doing, we have our game plan, we’ll get them Saturday.”

Chris Taylor said there will be changes in game two. He didn’t say what changes but there would be some. That could be line combinations or someone out of the lineup for someone else. We’ll find out when the team takes the ice for warm ups.

Here’s some game highlight videos and other write ups about the game:

"We had a game plan of doing things a certain way, and some guys didn't want to do it a certain way." – Amerks coach Chris Taylor after Game 1 loss. https://t.co/MRKUYjz5Zx