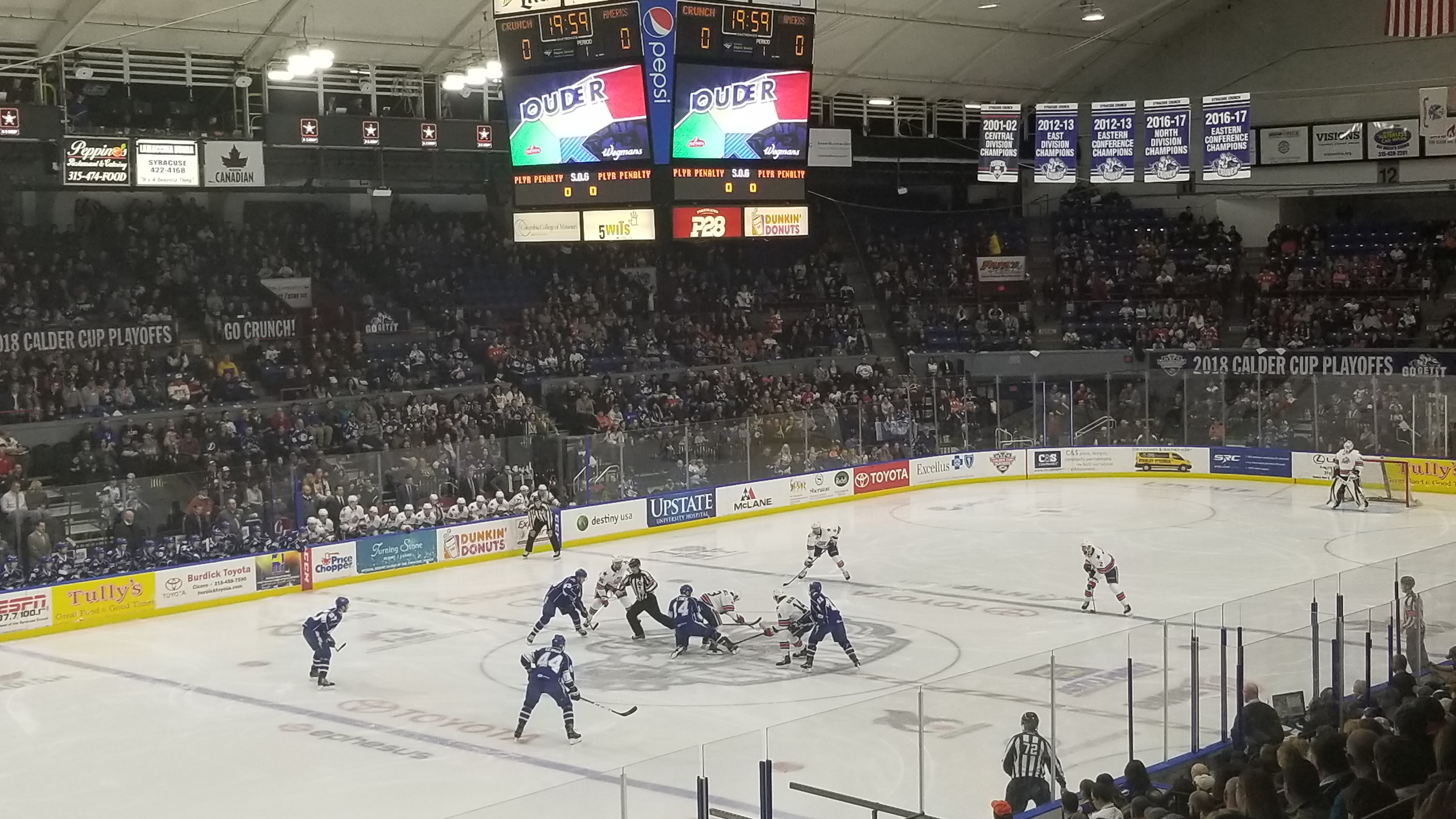 There’s a few different story lines about this Rochester Americans season as a whole but the only one that matters right now is the Syracuse Crunch taking a commanding 2-0 lead in the best of five first round series. Saturday night for game two in Syracuse was better but better isn’t good enough in the playoffs.

It was a fun night of playoff hockey for fans in Syracuse with a combined 11 goals scored, a lot of hits, some dirty play by both sides and back and forth chants between two loud fan bases. Long time Amerks and Crunch fans can tell stories about how that used to be common.

Down by a goal with 2.6 seconds left in the third period Colin Blackwell won the face off to Taylor Fedun who put a quick shot on net but it wasn’t enough. Imagine if that had gone in. That’s all Rochester has after two losses in two days, a lot of if scenarios.

After two games the Crunch have outscored the Amerks by a 12-7 margin, they have never given up a lead and have controlled the pace of play for 120 minutes of hockey.

Playing with a lead is something that the Amerks have struggled with all season and it’s likely that every team knows that. On Saturday night they battled back and gave the Crunch a run in the hockey game but this is the playoffs and moral victories aren’t going to advance a team to the second round.

Syracuse had a 4-1 lead at 2:15 of the second period and Chris Taylor called a time out that changed the game.

“We had a lot of game left, shift by shift,” is how Taylor described what was said in the time out. “Remember who we are and what our identity is. We don’t go down like this. Guys just popped back hard and that’s what I liked about tonight.”

Within the next four minutes Justin Bailey scored a short handed goal and 52 seconds after that Stuart Percy scored to get the Amerks within a goal.

Justin Bailey is a player that needed to have a solid playoff performance and he is, including that short handed breakaway goal. Asked about his game tonight he said, “I made a decision before the game that I wasn’t going to overthink. I was just going to go out there and finish all my hits and make my presence felt whether it was on the score sheet or a big hit to get the guys going.”

“There’s some things we need to work on but he’s a young kid still,” Chris Taylor said about Bailey’s game. “It’s his first playoff. I thought he played well.”

“They had a good start to the second period and we didn’t match it,” Nick Baptiste said. “We had that time out and we came back out and we played better. But you can’t spot them 4-1 in the playoffs, you’re not going to win that way. When we got to 4-3 we were still kind of chasing a little bit of the night. We know how we have to play and if we can do that on home ice I think we’ll be alright.”

Going into the third period it was a similar story to game one, Crunch were up by one goal and in charge of the game.

Less than halfway through the second period the Amerks had a 5 on 3 power play for 47 seconds – Erik Condra was in the box for a high stick and then Gabriel Dumont was called for a delay of game face off violation penalty (which has been quite rare this season – at least in Amerks games).

“That was the game right there for us,” Chris Taylor said about the inability to score on that power play.

Linus Ullmark can’t have all of the goals pinned on him but goaltending matters in the playoffs and Syracuse has had the better goalie with Eddie Pasquale.

Ulllmark always keeps it simple and to the point, “Sadly I couldn’t put up enough saves today.”

Anyone who has ever been to an AHL hockey game in Syracuse knows that the crowds there have one of the best goalie sucks chants in the league. Some goalies embrace it and it gets into the head of others.

“He’s fine, he’s fine. He’s one of the best goalies in the league and there’s a reason for that,” Baptiste said when asked about Ullmark. “I’d be surprised if you guys didn’t see a pretty crazy effort on Wednesday. he’s going to come out and have a really great game.”

“He made some unbelievable saves tonight and we gave up way too many Grade A’s. I’m sure there are a couple he might want to have back because he’s such a competitive guy but in no way shape or form is this anything to do with him.”

Chris Taylor doesn’t think that confidence will be an issue for Ullmark going into game three. He said,Â “I think he’ll be fine. We have a couple days here before we play him again. I think he’ll be fine with his confidence. Some of them he had no chance with and others he lost sight with, we’ll look at that later.”

In two playoff games Ullmark has a 5.59 goals against average and a .880 save percentage.

Another player that isn’t having a good playoff performance is Alexander Nylander. He had zero shots in game one and didn’t get credit for his only shot of the game until late in the second period. He only had one very short shift in the third period.

When asked about that Taylor said, “I just decided I was going with three lines, and I had three good lines that were going.”

A surprise appearance in warm ups and in the game was Sahir Gill. Two days ago he was limping around in a giant walking boot and missed practice all week. Saturday night he played like it never existed. Eric Cornel was also in the lineup. Hudson Fasching was a healthy scratch.

Casey Nelson replaced by Stuart Percy on defense. Percy finished the game with a goal and an assist. Nelson didn’t have a good game on Friday but finished the game. Scratched because of performance or upper body injury? Taylor said upper body so we’ll go with that.

All they can do now is look forward to the next game.

Nick Baptiste, “If we play our best hockey we saw that we can outplay these guys, we just have to do it for 60 minutes.”

Colin Blackwell talked about frustrations saying, “It’s tough especially since that was a big game for us. You just have to have that championship mindset that we’re going back to Rochester and hopefully two games at home and we have to take care of business. Every single shift and every single play is do or die.”

“You give up six goals there’s obviously things we need to clean up,” Justin Bailey said after the game. “It’ll be good to get back to Rochester, defend the home ice and come back here for game 5.”

It’s long shot but that’s the only mindset to have. Don’t give up yet, get to Blue Cross Arena on Wednesday night and cheer on the team.